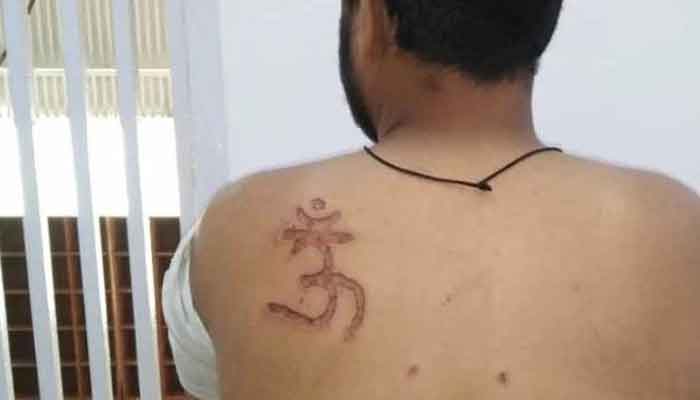 A Muslim man under trial in an Indian jail in Tihar has accused of being beaten up and branded with ‘Om’ symbol by the officials of Tihar jail. The incident came to notice when the victim’s family approached the court with a complaint that their son’s life was in ‘danger in the jail’.

The magistrate Richa Parihar found the Om symbol branded at the back of Shabbir when he was presented before her. Shabbir has been in Tihar jail since November 2017. The incident happened when Shabbir lodged a complaint with the jail superintendent Rajesh Chauhan that the stove of his barrack is not working.

The case was heard by the court on April 17. The judge asked Shabbir to narrate his story and show the symbol.

Jail superintendent turned furious upon his complaint and started beating Shabbir. Chauhan then again summoned Shabbir in his office where he beat him again for “trying to be a neta” and raising complaints. Some jail officials beat Shabbir again and then took a heated metal of “Om” symbol and engraved it at his back.

Later, Shabbir was denied food for two days in jail till April 14. Rajesh Chauhan then told Shabbir that he has “converted to Hinduism as he had ‘fasted’ during Navratri”.

The jail official also insulted him for his religions saying, “you Muslims have destroyed our country”. Shabbir then contacted his family to contact his advocate. On April 16, Shabbir’s advocate met him in jail while the Om symbol had healed a little.

Read more: Muslims in India continue to suffer at the hands of Hindu…

The case was heard by the court on April 17. The judge asked Shabbir to narrate his story and show the symbol. After which, the judge passed orders for his medical examinations and immediately “removed him the direct or indirect supervision of jail superintendent Rajesh Chauhan”.

The court also ordered the inquiry of the incident and ordered the DGP Prison to submit the report with a CCTV footage along with the statements of other jail inmates within 24 hours.

BRICS declaration and the appalling crudity of India’s strategic discourses