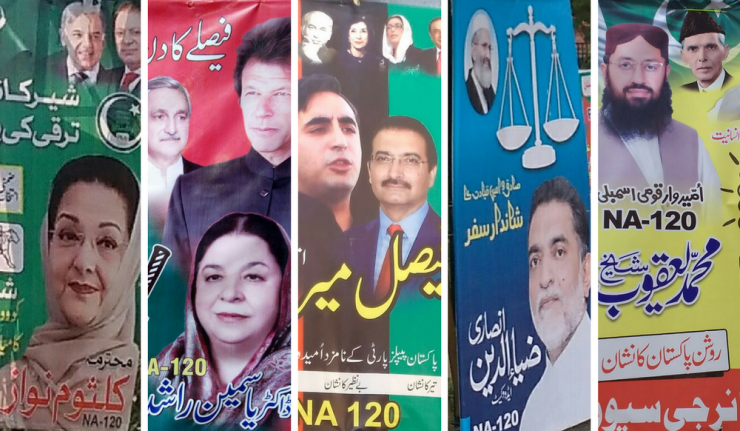 Shortly after the final results of NA-120, in Lahore, became clear, Maryam Nawaz, daughter of Nawaz Sharif, ex-Prime Minister of Pakistan disqualified in the famous “Panama Corruption Case” by Supreme Court of Pakistan came up with an unusully emotional speech declaring victory and blasting all her enemies – including direct taunts towards Supreme Court and veiled references towards Pakistan’s Military Establishment.

But it was obvious to all who watched her televised show that things are not going in the right direction. PMLN apparatchiks standing faithfully behind her had the appearance of servile characters under pressure to force smiles and angry tone of her voice carried the desperation of a loser rather than the self assured calmness of a victor. She had every right to feel desperate; PMLN lead of almost 40,000 in the general election of 2013 was cut short to a mere 13,000 and her PTI opponent, Dr. Yasmin Rashid has declared going to court to challenge the 29,000 non-verified voters that were allowed by the Election Commission. Add to this the fact that Maryam Nawaz faces corruption charges in Islamabad’s Accountability Court; trial begins in two days, on 19th September.

Maryam, long groomed as “Heir Apparent” by ex-Prime Minister, Nawaz Sharif, was chosen to run campaign in what was considered the safest of seats. PMLN had won this seat at least five times, three times by Nawaz himself; and in 2013 he had defeated his rival, PTI leader, Dr. Yasmin Rashid by almost 40,000 votes. He won around 91,000 and Dr. Rashid got a 52,000. Today this lead has been shortened to a mere 13,000. But it was mostly PMLN’s loss, because Dr. Rashid got around 46,000 against PMLN’s 59,000.

But significance of these numbers – and the political weakness they convey – only becomes clear when you factor in the circumstances surrounding these elections. Maryam Nawaz’s party, PMLN, has firm control on governments in Punjab and in Center; provincial and federal ministers, members national and provincial assemblies, local councillors, provincial police chiefs and top civil servants all were busy running the campaign to maximized the lead.

A convincing lead, under Maryam’s stewardship, would have strengthened her position against her critics in the party. Now things will become uncertain. Emergence of rival power centers inside PMLN may now become possible. Nawaz Sharif will have to decide sooner or later who will inherit his mantle.

That PMLN will easily win the elections was never in doubt; all efforts were therefore directed towards achieving a large lead. In open defiance of the rules of Election Commission Pakistan camp offices of Chief Minister Punjab and PM Pakistan in Lahore were used for election strategies, development works were initiated in the areas of the constituency (NA-120) after the announcement of election schedule and additional development works were announced as reward for wining elections. Election Commission -often blamed by opposition parties for being a mere tool in the hands of government – conveniently ignored all violations.

NA-120 seat was up for elections as a result of the disqualification of ex-Premeir. Huge lead was needed to demonstrate that public has rejected the Supreme Court decision of July 28, that disqualified ex-premier. Kulsum Nawaz, wife of ex-premier, Nawaz Sharif, was chosen to fight the elections but she suddenly fell ill after her nomination and ended up in London for check up; soon it was discovered that she was suffering from throat cancer – albeit treatable. Diagnosis kept on changing and political rivals suspected that Kulsum’s illness is a machiavellian ploy to gain sympathies in elections.

Irrespective of this controversy, fact remains that Maryam Nawaz’s campaign was designed to win sympathies against her father’s disqualification and mother’s cancerous illness. Given all these factors – support of the provincial and federal governments, generous laxity of the Election Commission that also allowed 29,000 unverified voters despite protests by the opposition and the fact that PMLN had been wining in this constituency since 1985 – the final lead of a mere 13,000 is nothing but a strategic defeat for PMLN – and more importantly for Maryam Nawaz herself.

This uncertainty will only increase when Dr. Yasmin Rashid turns up in court against the 29,000 unverified votes she had been petitioning Election Commission (ECP) to drop for the past several weeks. Instead of dropping them, ECP on the last day of the election allowed those voters.

Maryam’s cousin, Chief Minister Shehbaz Sharif’s son, Hamza Sharif, who had organized all past by-elections for the party in Punjab was found missing from scene. Chief Minister Punjab and his allies notably ex-Interior Minister Ch. Nisar are now well defined opposing group inside the party. Just before the elections, Ch. Nisar, in a Geo TV program with prominent anchorperson , Salim Safi, referred to Maryam as a “Child”. A convincing lead, under Maryam’s stewardship, would have strengthened her position against her critics in the party. Now things will become uncertain. Emergence of rival power centers inside PMLN may now become possible. Nawaz Sharif will have to decide sooner or later who will inherit his mantle. Transferring all his authority to Maryam, under the circumstances, will be more divisive.

This uncertainty will only increase when Dr. Yasmin Rashid turns up in court against the 29,000 unverified votes she had been petitioning Election Commission (ECP) to drop for the past several weeks. Instead of dropping them, ECP on the last day of the election allowed those voters. These 29,000 votes could not be verified, by National Database and Registration Authority (NADRA) against thumb impressions. This will now be a huge issue in court. And on 19th Sept, Maryam is supposed to present herself in Accountability Court to defend herself in references field by National Accountability Bureau (NAB) in pursuance of the orders of the Supreme Court. Family had been boycotting the National Accountability proceedings and courts on the plea that their review petition against the July 28 decision is pending before the Supreme Court. But this week, court finally rejected the review petitions.

A rift that is not there!