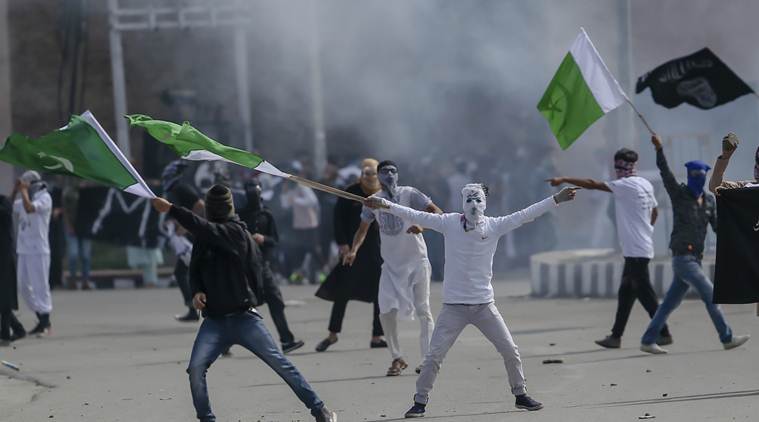 Israeli style settlements are not acceptable in Kashmir. Yasin Malik, Chairman of the Jammu and Kashmir Liberation Front (JKLF) reiterated this while talking with Dr. Moeed Pirzada, in Dunya News program on Kashmir Day.

Kashmir Day, is observed since Feb 5, 1990 each year in Pakistan and Pakistani administered Kashmir (called Azad Kashmir). Its a public holiday, was initiated by Pakistani PM, Benazir Bhutto, in 1990 on the advice of Qazi Hussain Ahmed, the then leader of Jammat-e-Islami Pakistan.

Yasin Malik, who has recently been released after prolonged incarceration, reiterated that Kashmiri Pundit families are most welcome to come back from Jammu and Delhi and settle in Srinagar and adjacent villages. Responding to Anchor’s question that some Pundits feel that they would not be safe without special protections, he asserted that already ten thousand Kashmiri Pundits are living in the city and adjoining villages sharing buildings, streets and markets. Why Indian government has to create these “Israeli style settlements” for Kashmiri Pundits? He asked rhetorically.

Malik asserted that already ten thousand Kashmiri Pundits are living in the city and adjoining villages sharing buildings, streets and markets. Why Indian government has to create these “Israeli style settlements” for Kashmiri Pundits?

Yasin Malik emphasized, what other Kashmiri leaders and even some Pundit leaders have said before, that creating these “Israeli Style Settlements” are an affront to the social fabric of Kashmiri society where Muslims and Hindus have lived together in harmony for centuries of years. This will create walls of hatred and break the societal structure: he asserted. He hinted that BJP and Modi government are not interested in Pundits but are using this excuse for some ulterior motives.

Other Kashmiri leaders have previously pointed out that these settlements are a cover to alter demographics of the Muslim valley; since Article 370 of the Indian constitution does not allow non-Kashmiris to settle in Kashmir.

Other Kashmiri leaders have previously pointed out that these settlements are a cover to alter demographics of the Muslim valley; since Article 370 of the Indian constitution does not allow non-Kashmiris to settle in Kashmir. Similar situation exists across the LOC in Pakistani administered Kashmir where people from other parts of Pakistan cannot buy properties.

BJP is opposed to Article 370 and had vowed in its election campaign to finish off Article 370 and special status of Jammu & Kashmir. Critics of the demarcated walled settlements fear that these walled cities will provide opportunities for Indian government to settle other non-Kashmiri people -especially retired defense persons – inside their fortresses without any effective monitoring by the state government and local media.

Mani Shankar Aiyar, in his book titled, ‘Confessions of a Secular Fundamentalist’ has written in detail how Jagmohan gave a safe passage to the Kashmiri Pandits to Jammu before unleashing terror in the Valley

Malik also asserted that Pundits were made to leave, in January 1990, under a clandestine plan by Jagmohan, the then governor of Indian controlled Kashmir. According to Malik, this was done on 19th January 1990, all of suddenly, before initiating a crack-down against the Kashmiri resistance on 21st January. He was referring to the famous Gawkadal massacre in Srinagar when Central Reserve Force (CRPF), Indian paramilitary, fired upon unarmed civilians. Govt figures maintain that 21 civilians died as a result of security forces’s firing and local media reported 51 deaths. however Kashmiri sources have always insisted that actual figure was much much higher.

Many others have also maintained that governor Jagmohan forced Kashmiri Pundits to flee from the valley. This list includes senior Congress leader and former Chief Minister of Madhya Pradesh, Digvijay Singh and Kashmir’s former Chief Minister, Omar Abdullah. But most important are perhaps the details shared by Congress leader, and ex-minister, Mani Shankar Aiyar, who in his book titled, ‘Confessions of a Secular Fundamentalist’ has written in detail how Jagmohan gave a safe passage to the Kashmiri Pandits to Jammu before unleashing terror in the Valley – something which Yasin Malik was referring to in his discussion with TV anchor, Moeed Pirzada.

Yasin Malik, was then, in 1990, a young militant leader who headed JKLF in forests of the Indian administered Kashmir. Responding to anchor’s question that if Kashmir Day is still relevant after 27 years when most Pakistanis have forgotten its context, he mentioned several massacres that happened emphasizing that sub-continent remembers only one “Jallinawala Bagh” of Amritsar but Kashmir has suffered several Jallinawallas since 1989. He thanked government and people of Pakistan for standing with Kashmiris.

Malik avoided responding to questions about the impact of JuD’s leader, Hafiz Saeed’s arrest by Pakistani government of Nawaz Sharif on 31st Jan. He said only government of Pakistan can explain if Hafiz has been arrested under international pressures or there are some other reasons.

Pakistan’s Arrest of Hafiz Saeed: Was it wise move at this stage? Global Village Space

He was critical of Pakistan’s Kashmir committee’s performance in highlighting the Kashmir issue to the world; but avoided making any direct comment on Maulana Fazal ur Rehman. He maintained that Kashmir committee will become active and functional and will deliver when government of Pakistan will so decide.

Kashmiris must be party to any solution to Kashmir, Moeed Yusuf tells India

Catch-22 situation: Will the State Bank’s decision to let the rupee depreciate work?

The cornered lion: Troubles are mounting for PML-N