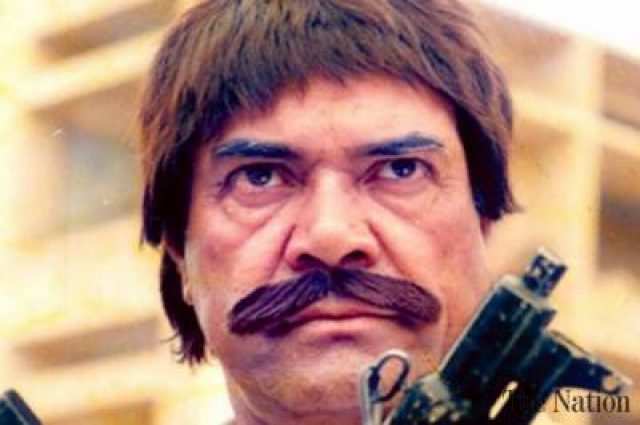 The legendary actor was born in Uttar Pradesh in India in 1938. His family migrated to Pakistan after partition and settled in Gujranwala.

The legendary prolific actor worked in over 703 Punjabi films and 100 Urdu films. Rahi won 106 awards throughout the span of his film career. He began his film career as a guest actor in 1959 in the movie ‘Baghi’.

‘Maula Jatt’ was the most successful film of his whole career. Later on, the actor was more commonly identified with the fictional character of ‘Maula Jatt’.

On January 9th, 1996, Rahi was returning late at night from Islamabad when his car’s tire deflated near Samnabad close to Gujranwala on Grand Trunk road. Taking advantage of the dark, some unidentified people opened fire on Sultan Rahi.

He was rushed to a hospital where he succumbed to his injuries.

He was an extremely devoted actor and had an immense commitment to his work.

He had a friendly and humble demeanour with a low-paid production staff and workers.

Sultan Rahi was accredited with various charity works. He built a mosque at the Bari studios. He also financed a film for junior artists.

His co-actor Bahar Begum said “Sultan used to joke about how the golden days of Lollywood will end with his departure and that is exactly what happened. Today, on his 21st death anniversary, I am missing Sultan more than ever,”

“Sultan was a source of income for thousands of people. No wonder everyone loved him so much” she recalled.

“Many other actors have come and gone but none of them could ever take Sultan’s place,” she further added.

Indeed, the nation could not produce another Rahi to follow his legacy.

Director Altaf Hussain said, “If you ask me, artists like Sultan Rahi come just once or twice in decades. I believe he was and will always remain the most successful Punjabi hero of all time.”

Rahi’s work provided a firm foundation to the Punjabi film center that later on became the epitome of entertainment in Pakistan.

Since the past few years, the entertainment industry is trying to regain its glory and perhaps is in need of another Sultan Rahi.