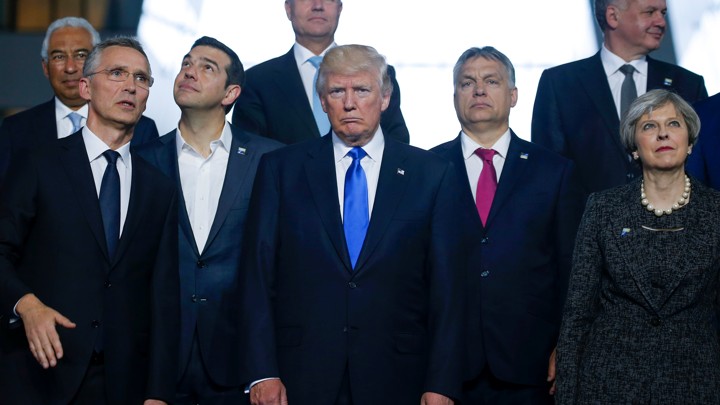 After the first day of the summit came to an end at the point of resolving financial disparities between the allies, member states turned their attention toward Afghanistan issue. Since U.S invasion of Afghanistan after 9/11, NATO followed the lead and deployed its assets into a place known as the graveyard of invaders. War has completed its 17 years and still, it is far from over. Afghanistan is barren terrain with no industry and negligible agricultural land, therefore the entire budget, which includes the military spending, comes from the United States of America and its western allies.

The country has been effectively putting a dent on the economies of NATO countries, particularly USA. The United Kingdom announced an additional 450 troops for the purpose of training Afghan security forces. Though NATO has formally ended its Afghan mission back in 2014 after handing over the control to Afghan security forces, the alliance has kept funding the Afghan government.

An optimism prevailed after the Eid ceasefire saw the jubilant intermingling of Taliban fighters and security force personnel in rural Afghanistan. But it lasted only as long as the Eid did and intense wave of attacks was witnessed afterward.

Foreign funding is the almost the entire source of revenue for the Afghan government to run the state affairs amid struggling to keep the peace situation in order. Reportedly, the United States has asked the member states to keep on allocating funds for the war-torn country till 2024. Most of the treaty countries are reluctant to comply with this demand as no one is certain about the way Afghanistan is going to end up in coming years.

United States of America under the leadership of Donald Trump announced a new South Asia policy in September 2017. Initially, Donald Trump himself was not in favor of prolonging the longest war in the U.S history but he was convinced by his advisors to do go the other way. The new strategy saw an increase in the number of U.S troops inside Afghanistan with an addition of 3000 armed forces contingents.

The strategy failed miserably and now US officials have said Washington is planning a strategic review, a year after Mr. Trump agreed to remain involved in the 17-year conflict. The demand for negotiations between the stakeholders, Taliban, the Afghan government, and the USA, is backed by key NATO states such as Germany, France, and Britain as they desperately want to get rid of unwanted turmoil.

Donald Trump, might be able to push his allies to sponsor the cause until the U.S backed government in Afghanistan manages to attain some sort of self-sustainment but the prospect itself is the quite obscure. The government, despite all the training of national troops, the presence of international soldiers and after spending billions of dollars, has not been able to secure the capital Kabul which is repeatedly been targeted by Taliban and ISIS suicide bombers.

According to a BBC report, Afghan Taliban are still a substantial threat with a presence in more than 70% of the country. When the world leaders are contemplating over the security situation and future of Afghanistan, another attack in Kunduz province took lives of 40 Afghan soldiers. As per the reports, the militants carried out the attack on a security post at night using night-vision goggles. The Taliban confiscated such high tech equipment including Humvees and weapons in various raids against the Afghan and international forces.

An operation is going on in Kunduz province which has a high percentage of Taliban but still, the militants have managed to capture an army base on the border of Kunduz and Takhar province. The fight to take over the base resulted in the death of 29 soldiers of the Afghan National Army. The fighting between the Taliban and Afghan security forces is getting intense after an increased footprint of militants since spring assault. The battle-hardened Taliban are giving a tough time to national security forces trained by U.S and allies.

An optimism prevailed after the Eid ceasefire saw the jubilant intermingling of Taliban fighters and security force personnel in rural Afghanistan. But it lasted only as long as the Eid did and intense wave of attacks was witnessed afterward. President of Afghanistan Ashraf Ghani along with Ukrainian President Petro Poroshenko are the only two non-NATO head of the states present at the summit. Presence of Afghan President how important the issue, and its plausible solution leading to a long-term peace, is for the United States of America and its western allies.

Why US liberal peace approach would not work for Afghanistan