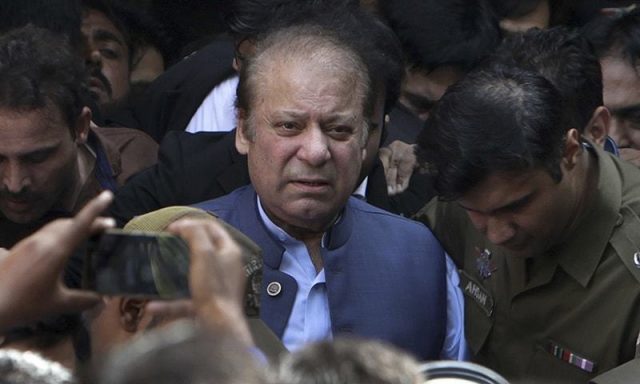 The accountability court has awarded total 11 years imprisonment to Nawaz Sharif, 7 and 1 years to Maryam Nawaz and her Husband Captain Retired Safdar respectively in a much-awaited decision on Friday. The ousted Prime Minster Nawaz Sharif has been sentenced to 10 years imprisonment under NAB ordinance Section 9(a)(v), which relates to owning assets disproportionate to known sources of income.

The Section 9(a)(v) of the NAB ordinance states: “A holder of a public office, or any other person, is said to commit or to have committed the offence of corruption and corrupt practices…. if he or any of his dependents or benamidar owns, possesses, or has [acquired] right or title in any [“assets or holds irrevocable power of attorney in respect of any assets] or pecuniary resources disproportionate to his known sources of income, which he cannot [reasonably] account for [or maintains a standard of living beyond that which is commensurate with his sources of income.]”

Nawaz’s sons Hassan and Hussain who have been absconding in the case were declared as “proclaimed offenders” and the court ordered non-bailable perpetual warrants of arrest against them.

On the other hand, Maryam has been sentenced to seven-year to prison for abetment. According to the 173-page long verdict, “Accused Maryam Nawaz aided, assisted, abetted, attempted and acted in conspiracy with her father accused Mian Muhammad Nawaz Sharif who was holder of Public Office.”

Nawaz’s sons Hassan and Hussain who have been absconding in the case were declared as “proclaimed offenders” and the court ordered non-bailable perpetual warrants of arrest against them.

Nawaz to come back to Pakistan

After a few hours of the decision, the PML-N superme leader held a press conference in London and said “I promise that I will continue this struggle until Pakistanis are free of the chains that they are kept in for saying the truth.” Nawaz Sharif also said that he will continue his struggle to upgrade the standard of lives of people in Pakistan. “I will continue my struggle till the people of Pakistan are freed from the slavery imposed on them by some generals and judges,” he said.

Experts in Pakistan think that a decision against a powerful family is not an ordinary success for democracy in the country. This journey against corruption and malpractices started almost four years ago when the chief of PTI Imran Khan launched an anti-rigging movement and staged a ‘dharna’ in the federal capital. IK’s dharana may not have achieved results in the form of a resignation from the former Premier, but Khan managed to stir a movement across the nation, uniting executive, judiciary, parliament and the people against a common foe, corruption.

The ousted Prime Minster Nawaz Sharif has been sentenced to 10 years imprisonment under NAB ordinance Section 9(a)(v), which relates to owning assets disproportionate to known sources of income.

According to senior anchorperson Dr. Moeed Pirzada, Pakistan’ middle class relentlessly struggled to have this day. “The efforts of people in Lahore, Islamabad and in other cities of the country to establish, accountability of public office holders and equality before law are praise-worthy”, said Dr. Moeed in a video message.

Now the important question is whether the superior courts in Pakistan will uphold the decision of the accountability court or will it get repealed within a few months. Meanwhile, Nawaz Sharif has wisely decided to come back and face the cases. If he would have decided not to come back, it is very likely that his political career would have been terminated for good. Now it is up to the courts to determine the fate of Nawaz and family, as they failed to justify their spending with lawful earnings.

Moreover, Nawaz Sharif now openly bashes at Judges and Generals, the important point is if he continues with the same narrative, can the PML-N afford to retain him in the future? Nawaz’s narrative is, if anything, anti-state, which is counterproductive to uniting the different and vibrant sections of Pakistani state and society. Nawaz’s future is, therefore, uncertain in Pakistan’s political discourse.

Previous articleTrump unleashes trade war with tariffs on China
Next articleNawaz & Maryam conviction: Has NAB set the stage for a good appeal?

20 September 2021
Previous articleTrump unleashes trade war with tariffs on China
Next articleNawaz & Maryam conviction: Has NAB set the stage for a good appeal?