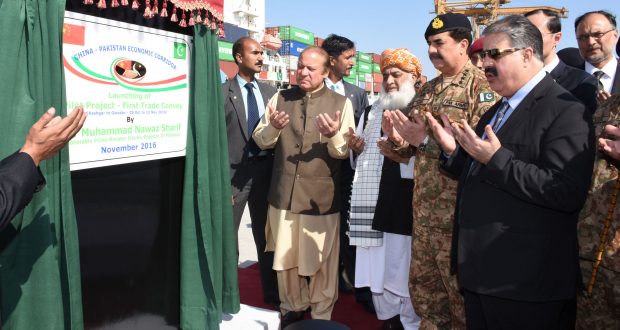 Prime Minister, Nawaz Sharif, while addressing a public gathering in Gwadar stated: “Today, I see every path to [Pakistan’s] economic stability lead out of Balochistan.” He explained that Gwadar was turning into a major center for development in Pakistan.

The PM said “It has been my dream to see Gwadar transform into a developed port city,” “Today, Gwadar has started on the road to success, and I am proud.

“I believe I am the first prime minister of Pakistan to stay the night in Gwadar. This is my love for Gwadar, its people and for Balochistan.” – PM Nawaz Sharif

The PM explained that Gwadar, which was once under the influence of terrorism is now experiencing development faster than any other province of Pakistan. He said that: “Pakistan will soon become an Asian tiger while Balochistan will prove to be the country’s economic tiger soon.”

The premier also highlighted; “We have built roads in areas where there was terrorism. The Frontier Works Organisation has completed that work and I am grateful to them. They have sacrificed their lives to build these roads.”

Following this, the PM explained how the development of an area is linked to its transportation systems. He said that the once roads are built, schools, colleges and hospitals are consequently built and success simply follows. Nawaz Sharif’s deep conviction in the modernizing power of roads and transportation has existed from the beginning of his political journey. Motorways in Pakistan can be considered his brainchild. Lahore-Islamabad motorway’s success lead to the belief that a country like Pakistan can have such multi-lane highways. India is still trying to catch up.

While addressing the audience, Sharif also said he had not only purchased land for building a university but that he also had plans to create a 300 bed hospital. He further added that Rs5 billion had been set aside for desalination plants which will work to provide households with clean water.

“We will provide five million gallons of clean drinking water to Gwadar while Rs1billion will be spent to improve the sewerage system in the city.”

The PM explained that “outsiders” had exploited the resourceful city by paying less for the lands purchased. He said that no benefits had been given to residents of Gwadar and as a result, he will be planning on a strategy with the chief minister of Balochistan to bring prosperity to the region.

Nawaz Sharif’s deep conviction in the modernizing power of roads and transportation has existed from the beginning of his political journey. Motorways in Pakistan can be considered his brainchild. Lahore-Islamabad motorway’s success lead to the belief that a country like Pakistan can have such multi-lane highways. India is still trying to catch up.

It was further presented that 50 high achieving students of Balochistan province will be given the chance of studying in prestigious universities. Regarding the health of the residents, Sharif commented that health cards will be distributed among the residents for a free of cost treatment across the country.

The PM concluded the addressing saying that the China Pakistan Economic Corridor (CPEC) will be a game changer for the economy of Pakistan.