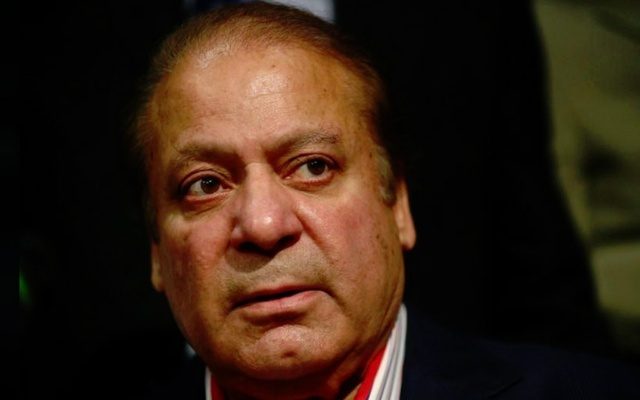 Former Prime Minister Nawaz Sharif has been sentenced to seven years in prison apart from a fine of $25 million in the Al-Azizia Steel Mills reference. The court has acquitted Sharif in the Flagship Investments reference.

National Accountability Bureau (NAB) officials took Sharif into custody from the courtroom after the verdict was announced by Judge Arshad Malik of Islamabad’s Accountability Court No 2. he will be jailed in Lahore. The verdict had been reserved on Wednesday.

Earlier, Nawaz reached the courtroom amid tight security. Accompanied by several PML-N leaders including Hamza Shehbaz, he was welcomed by hundreds of PML-N workers who had gathered outside the accountability court.

Earlier in June, Sharif was sentenced to ten years in jail while his daughter Maryam Nawaz was handed a seven-year sentence in the Avenfield properties reference. The sentence was later suspended by the Islamabad High Court and NAB’s appeal against the suspension of the sentences is pending before the Supreme Court.

Tight security was put in place around the accountability court ahead of the verdict with more than 1,000 security personnel deployed and roads leading to the court complex sealed.

The two references concern the setting up of the Al-Azizia and Hill Metal Establishment in Saudi Arabia, and Flagship Investment in the UK. Nawaz had been charged in in both references under Section 9(a)(v) of the National Accountability Ordinance, 1999.

Today’s judgment concludes a series of cases of money laundering and corruption against the Sharif family constituted in the wake of the Panama papers in 2017. The former premier was disqualified from being a member of the parliament by the Supreme Court for not disclosing his employment in the UAE-based Capital FZE company on July 28, 2017, and had ordered the National Accountability Bureau to file three references against the Sharif family.

In the Avenfield Reference decided by the accountability court on July 6 this year, Nawaz was sentenced to 10 years in prison while his daughter Maryam Nawaz was handed down a seven-year sentence and son-in-law Captain retired Mohammad Safdar received one year.

The Sharif family has maintained that late Mian Mohammad Sharif (Nawaz Sharif’s father) established Gulf Steel Mills (GSM) in the UAE in 1974. It says 75 per cent shares of GSM were sold to Abdullah Kayed Ahli and the entity was re-named Ahli Steel Mills (ASM) in 1978 and the remaining 25 per cent shares were further sold to the ASM in 1980. According to the family’s plea in the court, this yielded an amount of AED 12 million which was invested with the Qatari royal family.

The family maintained that the late Mian Sharif had provided AED 5.4m for Hussain Nawaz and AED 4.2m for Hasan Nawaz to establish Al-Azizia and Hill Metal Establishment in Saudi Arabia, and Flagship Investment and 16 other companies in the UK.

The prosecution, on the other hand, maintained the Sharif family has failed to justify the source of the funds to set up the firms.

All the UAE’s men: Gulf crisis opens door to power shift in Palestine

Evaluation of democracy and forthcoming challenges to next government