Commissioner Karachi, Iftikhar Shallwani, partnered with Nestle Pakistan to organize a city level marathon that aims to boost the confidence of citizens in administration and help the city authorities in assuring peace. Nestle strives for a better Pakistan and has been organizing events like "Clean Green Pakistan" and more recently "Commissioner Karachi City Marathon".

Commissioner Karachi, Iftikhar Shallwani, announcing a major sporting event in the city, said that the registration for the 2nd “Commissioner Karachi City Marathon” has been opened and citizens from all walks of life are requested to get registered at a maximum number to take part in the race to be held on 12th January at 9 am.

Maximum participation will help the city administration’s efforts to brand Karachi as a city of peace and to spread the message that Karachi is the City of Sports and the City of Cricket lovers.

Additional Commissioner Karachi – Asad Ali Khan, head of the organizing committee of the Marathon Deputy Commissioner south Syed Salahuddin Ahmed, Olympian Islahuddin, and representative of the sponsor of the event Waqar Ahmad, Head of Corporate Affairs, Nestlé Pakistan also graced the event, “We are glad that we have partnered with Commissioner Karachi for this marathon; Nestlé MILO® believes that ‘sports’ is a great teacher and values learnt from sports helps to become successful well-rounded individuals of future.”

He added, “Nestlé MILO® marathon has been a successful venture across Asia and Oceania region and now we are encouraging healthy activities in Pakistan and hence this partnership.”

DC south briefed about the arrangements to the media. He also highlighted the details of the marathon.

Commissioner Shallwani said, “The competition would be for Under 19, Under 29, and 30-Plus categories for both men and women. He invited all Karachiites to come forward and participate in the marathon to raise awareness that Karachi is a peaceful, safe and secure city.” Special categories for disabled and senior citizens have also been included in the Marathon. Ten prizes in every category will be given to the winners.

Commissioner said, “The marathon is a way to bring the citizens of Karachi together. Athletic activities such as these can energize the youth and give them a way to take ownership of the city.” He was optimistic in saying that it would strengthen the efforts to promote peace in the city and positive activities being carried out by the Sindh government and the city administration.

He said that the Marathon race which is set to be held in the DHA will be over a distance of ten kilometers. He appealed to the citizens to participate in the Marathon race to make it a successful event as they did last year. He said he wants the City Marathon to become the city’s signature event for peace and harmony and be a regular event like other big cities in the world have.

He hoped that the citizens of all ages be it the youth, senior citizens, men and women even special people would participate in the Marathon race in great number. He said the Marathon will be run over a distance of ten kilometers, starting from the DHA Moin Khan Cricket Academy and culminating at the same point. 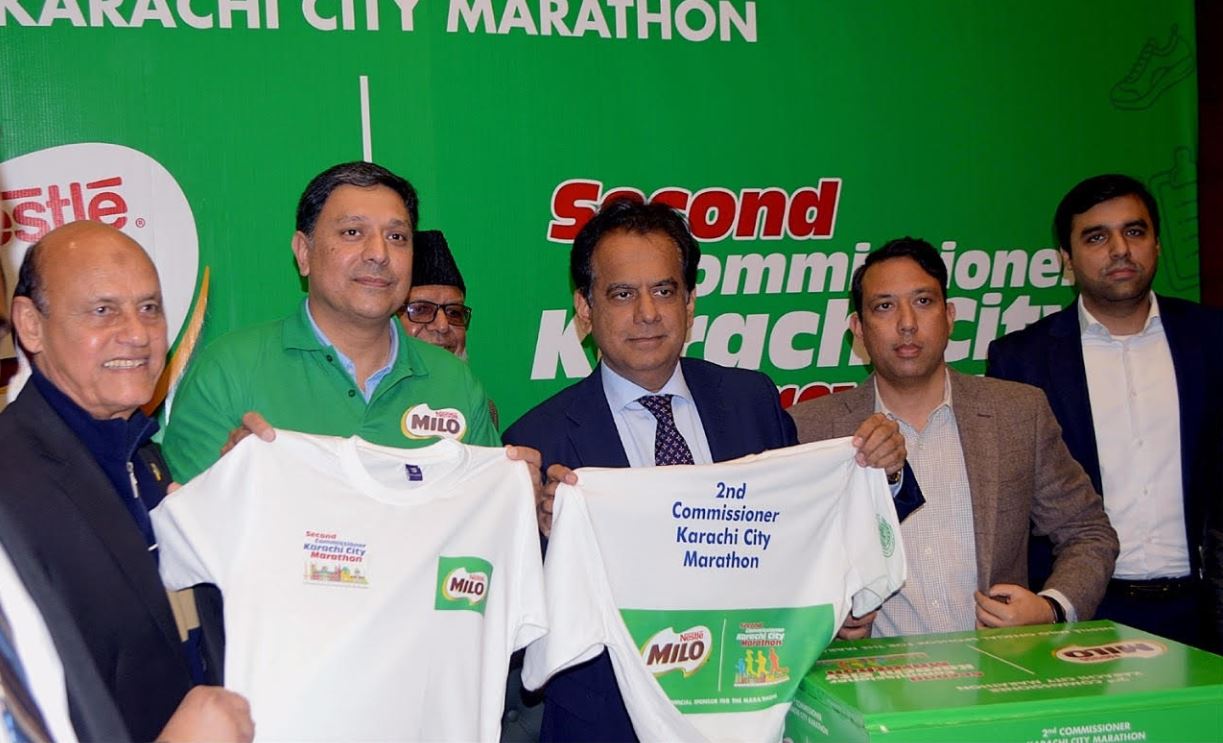 “The Sindh government, under the able leadership of Chief Minister Murad Ali Shah, is aiming to hold regular marathon events as well as promote sports in general in the city so that people can relax and compete together to bring long-lasting peace “Karachiites have always needed an event of their own, that they could earmark every year, and participate in full swing,” he added.

Thanking the sponsors of the event, Commissioner Shallwani, said, “I must commend Nestlé for coming together with us for this event; I would also like to thank all our partners who have supported us for this cause.” Waqar Ahmad, Head of Corporate Affairs, Nestlé Pakistan, said, “We are glad that we have partnered with Commissioner Karachi for this marathon; Netlé MILO® believes that ‘sports’ is a great teacher and values learned from sports helps to become successful well-rounded individuals of future.”

“Nestlé MILO® marathon has been a successful venture across Asia and Oceania region and now we are encouraging healthy activities in Pakistan hence this partnership,” he added. DC South Salahuddin said that the participants will gather by 8.00 am at Moin Khan Academy and the Marathon will begin at 9:00 am on 12th January where the people will be participating in three categories and each category will be highlighted by stickers of a different color. The Marathon will begin from Moin Khan Academy at Khayaban-e-Tipu Sultan and will pass through Abdul Sattar Edhi Avenue to Captain Farhan Shaheed Park to Khayaban-e-Ittihad and back to Moin Khan Academy.

The commissioner also informed that to facilitate the participants, they will establish camps on seven different locations where water, washroom facilities, first aid, food stalls, and shuttle services will be provided. A fire brigade and emergency services will also be available throughout the route, Shallwani said. “People can also come early at around 8:00 am in the morning to Moin Khan Academy on the race day to register for the marathon which will start at 9 am.”

The US integrated deterrence approach and China

Azam Swati to be released after BHC quashes all FIRs

Flood affectees in need of support look towards government, private sector for help