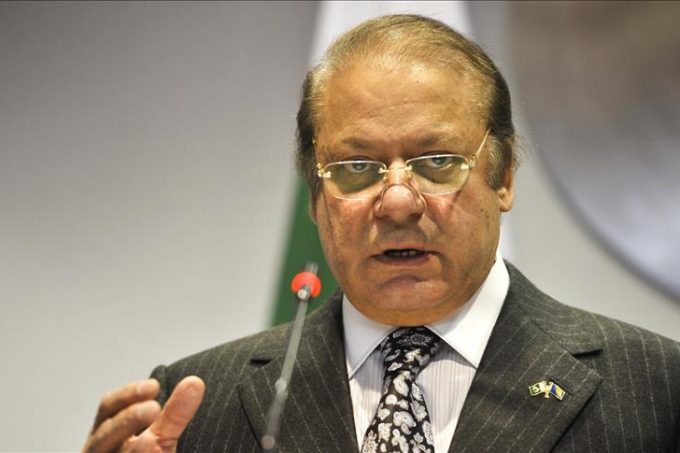 Pakistan will not cut off ties with Qatar in wake of the decision of the GCC countries to sever diplomatic relations with the Gulf country over its alleged support for terrorism in the region.

The Spokesman of the Foreign Office Nafees Zakariya said, “for now [at least], there is no change for Qatar. We will announce if there is any development on this issue.”

KSA has been generous in helping Pakistan economically and it has a large Pakistani working diaspora.

Pakistan has friendly relations with both countries and hence it puts it between the devil and the deep sea. Much of Pakistan’s predicament has got to do with personal ties that Prime Minister Nawaz Sharif enjoys with both countries. His family is being probed in Panama leaks scandal where Qatari Prince Hamad bin Jasim bin Jaber Al-Thani is playing a role to rescue them. Qatari Prince Hamad bin Jasim bin Jaber Al-Thani regretted that he could not appear before the Joint Investigation Team (JIT) probing the Panama Papers case against the Sharif family as he was busy but his letter was delivered.

Sharif’s closeness with the Riyadh is well-known as he was saved and given refuge in the Kingdom when General Musharraf had imprisoned him after the coup. KSA has been generous in helping Pakistan economically and it has a large Pakistani working diaspora.

This quandary comes at a time when Pakistan is faced with severing ties with India and Afghanistan and hence it has its work cut out as the Arab countries are on the surge against Doha.

On Monday, Saudi Arabia, Bahrain, and the United Arab Emirates cut off diplomatic ties with Qatar, causing fissures in the powerful Gulf consortium ostensibly for its alleged support to terrorism. Egypt also accused Qatar of espousing anti-Egyptian forces and ended diplomatic relations with Doha. The quartet has been joined by other countries like Yemen, Libya, Mauritania, and Maldives. Jordan has downgraded its diplomatic representation in Doha.

According to the Saudi state news agency SPA Qatar “embraces multiple terrorists and sectarian groups aimed at disturbing stability in the region, including the Muslim Brotherhood, ISIS, and Al-Qaeda, and promotes the message and schemes of these groups through their media constantly.”

Saudi Arabia also closed the border and halted air and sea traffic with Qatar, urging “all brotherly countries and companies to do the same”.

Egypt also broke off ties with the tiny Gulf state. It has closed all its seaports and airspace to Qatari vessels and planes, the country’s Foreign Ministry said in a statement.

The Saudi Press Agency said the Saudi government would also reach out to its allies “and start the immediate legal procedures for understanding with fraternal and friendly countries and international companies to implement the same procedure as soon as possible for all means of transport to and from the State of Qatar, for reasons related to Saudi national security.”

Bahrain also accused Doha of meddling in its internal affairs. The Foreign Ministry issued a statement on Monday to the effect.

“Based on the insistence of the State of Qatar to continue to destabilize the security and stability of the Kingdom of Bahrain, to interfere in its affairs, to continue the escalation and incitement of the media, and supporting armed terrorist activities, and financing groups associated with Iran to subvert and spread chaos in Bahrain in flagrant violation of all agreements and the principles of international law without regard to values, law, morals, consideration of the principles of good neighborliness, or commitment to the constants of Gulf relations, and the denial of all previous commitments.” The statement said.

Qatari diplomats had 48 hours to leave the kingdom, and airspace and ports between the countries would be closed within 24 hours of Bahrain’s announcement, the statement further added.

UAE broke diplomatic ties citing Qatar’s “ongoing policies that rattle the security and sovereignty of the region as well as its manipulation and evasion of its commitments and treaties.” It has banned Qatari nationals from entering the Emirates and has given two weeks for those already present to leave.

Egypt also broke off ties with the tiny Gulf state. It has closed all its seaports and airspace to Qatari vessels and planes, the country’s Foreign Ministry said in a statement.

“The Government of the Arab Republic of Egypt has decided to sever diplomatic relations with Qatar because of the continued hostility of the Qatari authorities towards Egypt,” the statement read, also accusing Doha of supporting terrorist organizations, including the Muslim Brotherhood.

At a time when the fight against the menace of terrorism in the region has been bequeathed to the Saudi-led military alliance with a visible bent against Iran, this decision is very important.

Pressure would mount on Pakistan to make efforts to “fight terrorism in all forms and manifestations“, of which isolating Qatar will become an important plank.

Qatar regretted and called the step as unjustified. “The measures are unjustified and are based on claims and allegations that have no basis in fact,” the statement said, adding that the decisions would “not affect the normal lives of citizens and residents,” said the foreign ministry.

Pakistan will find it difficult to tread this way as the charge-sheet against Qatar is terrorism-specific. Pressure would mount on Pakistan to make efforts to “fight terrorism in all forms and manifestations“, of which isolating Qatar will become an important plank.

It is quite evident that Riyadh has been emboldened by the open support lent by President Trump against Tehran. The ambiguity surrounding the newly-formed military alliance’s real target was removed when America’s strongman called upon everyone to confront Iran besides signing the US $110 billion arms deal with Saudi Arabia.

The concerted action against Qatar is primarily due to concerns that the country is cozying up with Tehran. It is believed that Qatar does not kowtow Saudi Arabia in its vehemently anti-Iran stance. Earlier this year, Qatari Emir Sheikh Tamim bin Hamad Al-Thani said that his country enjoyed deep and historical ties with Iran. In a phone conversation with Iranian President Hassan Rouhani Al-Thani said he wanted the ties with Iran to be “stronger than ever before.”

Doubts over the fact that this boycott was done because of Doha’s ties with Tehran were removed when James Mattis alluded to Iran while commenting on the issue. James Mattis said that Iran lies at the heart of the problem. “Iran’s actions speak louder than anyone’s words,” he said.

Pakistan, it must be stressed, does not have the luxury to takes sides in the ever-simmering ties between the GCC countries and Iran.

Pakistan should steer clear of this intra-GCC tiff and the overall tussle between the bastions of the Islamic world, Iran, and the USA.

Pakistan, with a predisposition for sectarianism, cannot afford to do anything other than deft diplomacy. The first thing is to convince Iran that Pakistan will not fight a sectarian war on behalf of the alliance, something which looks rather difficult. Headquartered in Saudi Arabia, the alliance has been given a heavily sectarian undertone by the categorical labeling of Iran as a fulcrum of terrorism by President Donald Trump last month. Pakistan, it must be stressed, does not have the luxury to takes sides in the ever-simmering ties between the GCC countries and Iran. Efforts are well underway to mediate between Saudi Arabia and Iran on part of Pakistan.

Pakistan had earlier decided to condition its participation in the 39-state Islamic military alliance so as to minimize the negative ramifications on its ties with Iran.

Government sources insisted that until TORs are not decided, Pakistan would not join the alliance. Pakistan is likely to take up the matter in the Defense Ministers Conference to be held in a few weeks from now. It will broach upon the fact that it should only be asked to fight terrorism, any deviation would lead to rifts between Muslims, something which Pakistan cannot be a party to.

Pakistan enjoys good relations with Qatar especially in the field of energy and defense. Earlier this year, while on an official visit to Qatar, COAS General Bajwa said: “Pak-Qatar defense cooperation will have a positive impact on the bilateral relationship as well as on regional security.”

Qatar’s Prime Minister Sheikh Abdullah bin Nasser bin Khalifa Al-Thani during a meeting with the COAS expressed his desire to learn from Pakistan Army’s experience in security domain and also sought assistance during forthcoming Football World Cup including the provision of manpower.

Pakistan has been suffering from a severe energy crisis and the import of LNG from Qatar would be a positive step to address the issue.

The minister of state expressed his country’s desire to purchase defense equipment and hardware from Pakistan and lauded the services of Pakistani defense personnel in the Qatari armed forces.

“Qatar is keen to have joint ventures with Pakistan in the area of defense production,” the minister said.

Both countries signed a $16 billion deal of Liquefied Natural Gas (LNG) for a period of 15 years. Pakistan has been suffering from a severe energy crisis and the import of LNG from Qatar would be a positive step to address the issue. The deal has large prospects for the energy sector as Pakistan would be able to meet its energy shortages.

Hence, Pakistan has done the right thing in not cutting off ties with Qatar but it remains to be seen if Pakistan can maintain this position since Saudi Arabia will expect Pakistan to show solidarity with this anti-Qatar stand.

Previous articleBombs for the Taliban: Is the US prolonging the Afghan war, again?
Next articleSuicide attacks and police firing: Death roams free in Kabul

25 September 2021
Previous articleBombs for the Taliban: Is the US prolonging the Afghan war, again?
Next articleSuicide attacks and police firing: Death roams free in Kabul