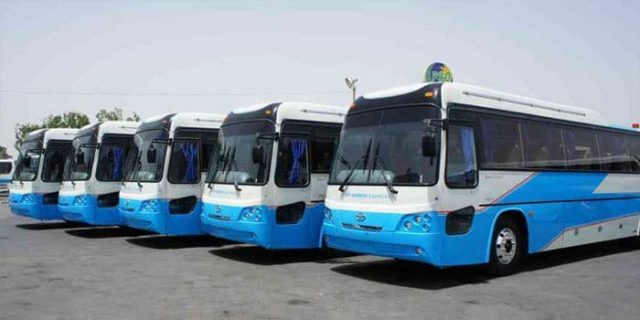 More and more bus services in Pakistan are competing against Daewoo style of luxury services. With the decline of Railway services, bus travel has become the chief source of intercity travel in Pakistani. The transit market is becoming overly competitive in Pakistan with new companies offering more comfort and facilities opening at a fast pace all over the world. Al Halal Travels, a new Bus Terminal, in Faisalabad, built at an estimated cost of Rs.500 million, is an interesting new addition to this burgeoning expanding market in Pakistan.

This newly constructed terminal, with international standard facilities, is located at the main Sargodha Road, opposite Crescent Textile Mills, in an area that is often called, “Bolay di Chuggi” after a local saint. Three bus companies – Faisal Motors, Shuja Motors and Silk Line – are offering services from this terminal. Silk Line is affiliated with Al Halal Travels that owns and operates the terminal. Connecting Faislabad with Rawalpindi, Lahore and Multan this terminal is already offering luxury services to more than a thousand passengers daily.

Luxury services being offered are not only air-conditioned coaches and comfy realign chairs but a choice of snacks and movies and more importantly Wi-Fi. Providing internet in buses is the latest feature across Pakistan. Internet has now become a necessity in the world with over 140 million handsets across Pakistan among which nearly half are smartphones. Handheld devices are becoming one of the biggest sources of media and entertainment in the country. 65% of the Pakistani population is reportedly under the age of 30 so airplane style video services are now merely an entertainment fad for older generation.

Fast developing motorways are transforming lifestyle and travel dynamics across Pakistan – especially in Punjab. Buses from Faisalabad now reach Lahore in less than two hours and Rawalpindi in four. Multan, which at the moment is at a four hours bus distance, will be reachable in two and a half hours once the new motorway is complete and operational. Credit for the motorways will go to Pakistan Muslim League-Nawaz (PML-N) government who first conceived the idea, and kick started the work on Lahore – Islamabad motorway in 1993.

The real idea behind the motorways was to inspire the nation that Pakistan, too, can compete with the rest of world when it comes to infrastructure development. The government’s idea of introducing a service provider like Daewoo into Pakistani transport system in 1997 lead to a revolution of its own kind. Today increasing number of indigenous service providers like Al Halal Travels is competing to provide services often better than Daewoo at affordable prices.

Silk Line is affiliated with Al Halal Travels that owns and operates the terminal. Connecting Faislabad with Rawalpindi, Lahore and Multan this terminal is already offering luxury services to more than a thousand passengers daily.

India, despite of its huge size and bigger economy, is only waking up to the possibility of Pakistani style motorways. Visitors from India in 1990’s and till now have been awe struck by the quality of Pakistani motorways. Visualizing Pakistan from the lens of Indian and western media, it’s impossible to believe that major parts of the country are connected with western style roads and motorways. While the internet has made the world a global village, the need for faster transport is equally important to abridge the actual distances between people.

Previous articleSupreme Court not satisfied with ISI’s report on Faizabad sit-in
Next articleBad news for Toyota enthusiasts: Prices to be raised further

19 September 2021
Previous articleSupreme Court not satisfied with ISI’s report on Faizabad sit-in
Next articleBad news for Toyota enthusiasts: Prices to be raised further