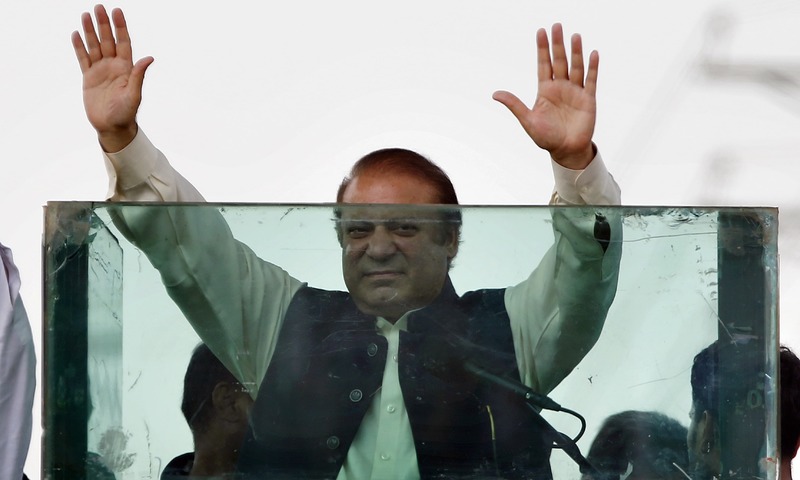 Opposition parties in the Senate have jointly amended the Election Act 2017, making it impossible for Nawaz Sharif to be president of PMLN.  Amendment was brought jointly by PPP, PTI and Jammat-e-Islami and was passed with the support of MQM, PMLQ and members from FATA.

Amendment approved clause 203 of the Elections Bill 2017, which now once again bars a disqualified person from becoming an office-bearer of a political party. The amendment aims to remove the controversial clause which was recently passed in the Elections Act 2017, that most political experts considered a PML(N) legal ploy, in violation of the spirit of constitution and norms, to keep their disqualified leader in power.

This latest amendment, brought by the opposition, to the bill was opposed by the government with Federal Law Minister Zahid Hamid expressing his reservations. It was passed with a majority of 49, which included FATA senators, voting in favor of the amendment. PMLN government is a minority in Senate; a situation it hopes to change in the Senate Elections of March 2018.

Amendment approved clause 203 of the Elections Bill 2017, which now once again bars a disqualified person from becoming an office-bearer of a political party.

The Elections Act 2017 was steamrolled through both the houses of Parliament by the PML(N) after its leader Nawaz Sharif was disqualified by the Supreme Court in a verdict on the Panama Papers scandal. Despite strong protests from opposition lawmakers, in the Senate, the election bill was passed by a majority of one vote. It was considered to be a legal gambit to accommodate a single individual: Ex-PM, Nawaz Sharif.

The move by the opposition may as well be the death knell of Nawaz Sharif’s political career and be a major blow to the PML(N) which gravitates around the disqualified Prime Minister.

The bill titled the Elections (Amendment) Bill, 2017 on Oct 23, was jointly submitted by members of the Pakistan Peoples Party, Pakistan Tehreek-i-Insaf, PML(Q) and the Jamaat-i-Islami. There is a universal consensus among the opposition party to stop the PML(N) from changing laws to accommodate their own.

Read more: Nawaz Sharif Corruption Trial: Should there be a live transmission from…

The opposition faced the danger of the greater numbers mobilized by the PML(N) the way it facilitated the passing of the controversial bill in the first place in third week of September.  However, opposition parties had learnt their lessons well;they ensured maximum attendance of their members in the assembly and had the support of all parties and FATA members. The controversial clause in the act was challenged by opposition lawmakers even the first time, in September, but they were not successful in overturning it due to low attendance and divisions within.

In September, the most glaring failure of the collective opposition was the voting of an MQM member in favor of the government and against his own party. MQM Senator Mian Muhammad Ateeq Shaikh voted against the opposition-moved amendment, thus providing the government an opportunity to get the bill sailed through the upper house.

The bill had helped the PML(N) to bring its disqualified leader back to the front. On October 2, the PML(N) central working committee approved an amendment to the party’s own constitution, paving Nawaz’s way to lead the party following his disqualification from the Supreme Court. Thus, Nawaz was saved from political irrelevance.

The PPP is one of the petitioners. The current move by the joint opposition bodes ill for the PML(N) in general and Nawaz Sharif in particular. If the opposition manages to get its act together this time.

However, the bill’s passage and Nawaz’s return did not stop the opposition effort to have it struck down. The PTI specially maintained that omission of the clause ─ which states that any person ineligible to hold office as a MNA is also ineligible to hold the position of head of a political party ─ was contrary to the Constitution as it would allow a disqualified individual to take charge of political affairs of a party.

A number of petitions have also been filed in the Supreme Court challenging the said provision of the Elections Act. The PPP, Sheikh Rashid and the Pakistan Awami Tehreek (PAT) were among the petitioners. The current move by the joint opposition bodes ill for the PML(N) in general and Nawaz Sharif in particular.

MQM Senator Ateeq Shaikh voted against the opposition-moved amendment, thus providing the government an opportunity to get the bill sailed through the house.

Nawaz Sharif and his “heir apparent” Marium Nawaz are already fighting for their political survival against corruption cases in Islamabad, as well as growing internal dissent among the party. Nawaz had managed to stave off internal opponents by getting “elected” as the Party president but if the legal gambit of the opposition succeeds, he may be forced to step down. It remains to be seen, how PMLN party factions still loyal to Nawaz Sharif respond to this latest move by combined opposition.

However, now Nawaz’s woes may multiply with a return of the challenge to his legal legitimacy. When the Act was passed the first time, through National Assembly and Senate, in Aug and Sept, the PML(N) presented a united front.

Nawaz Sharif may now find it extremely difficult to collect everyone, in PMLN, once again behind what is seen only as his personal interest.

However, the passage of time has seen the rise of new rifts in the party with many opposing his leadership. The case of Riaz Pirzada, the Federal Minister for Inter Provincial Coordination, supported by many other members of PMLN, who now openly call for Nawaz to be replaced with his brother, Punjab Chief Minister Shahbaz Sharif, is a case in point.

A fragmented PML(N) in the National Assembly, after the emergence of fault-lines, may not be able to keep the amendment from passing. Nawaz Sharif may now find it extremely difficult to collect everyone, in PMLN, once again behind what is seen only as his personal interest. The move by the opposition may as well be the death knell of Nawaz Sharif’s political career and creates serious challenges for PML(N) which has hitherto revolved around the disqualified Prime Minister.

Coronavirus bars Indian cricketers to use saliva on balls