Foreign Minister Shah Mehmood Qureshi is on a 2-day visit to Colombo, in a bid to strengthen ties with the newly elected President, Gotabaya Rajapaksa, and extend an official invitation to visit Islamabad. 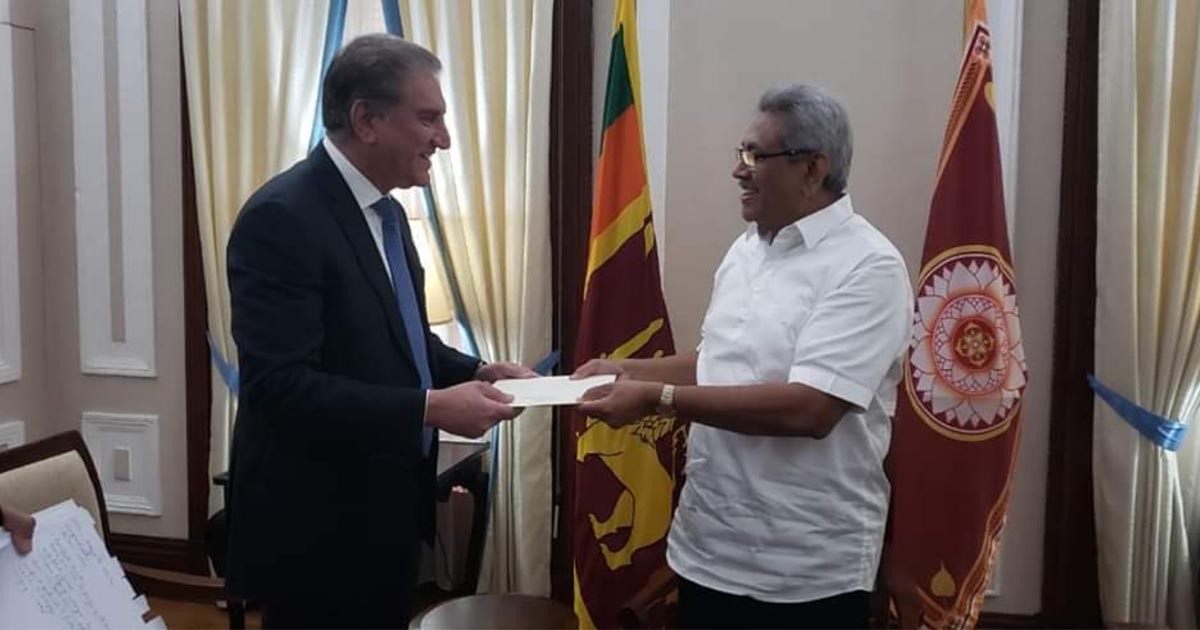 Foreign Minister Shah Mehmood Qureshi is on a two-day visit to Colombo. He arrived in the Sri Lankan capital on Sunday, and on Monday, he called upon the newly elected leadership of the country, to convey Prime Minister Imran Khan’s congratulatory message on the electoral victory.

The Foreign Minister began his diplomatic engagements in Colombo, on Monday, with a meeting with his recently appointed Sri Lankan counterpart, Dinesh Gunawardena. The two discussed the entire gamut of bilateral relations and matters related to the ongoing regional and international issues.

Addressing the press after his meeting, Shah Mehmood Qureshi said, “I have had an excellent meeting with the Foreign Minister. I am fortunate to be the first Foreign Minister to have visited Colombo since the new government has been elected”.

He added, “There is a lot we can do to promote our mutual interests.” The Foreign Minister observed that Pakistan and Sri Lanka have been supporting one another in economic terms, and in maintaining regional peace and stability.

Dr. Mohammad Faisal, the official spokesperson of the Ministry of Foreign Affairs, said in this regard, “FM calls on the President of Sri Lanka. Bilateral issues, trade, investment and people to people contacts discussed. FM handed over a letter from President [of Pakistan] to President of Sri Lanka and invited him to visit Pakistan at his earliest convenience.”

FM calls on the President of Sri Lanka. Bilateral issues, trade, investment and people to people contacts discussed. FM handed over a letter from President to President of Sri Lanka and invited him to visit Pakistan at his earliest convenience. #FMinsrilanka pic.twitter.com/nwNRc4KH7p— Dr Mohammad Faisal (@DrMFaisal) December 2, 2019

The Foreign Minister Qureshi is also expected to call upon the Sri Lankan Prime Minister, Mahinda Rajapaksa later in the day, as stated in a press release issued by the Foreign Office. Hailing the relations between Colombo and Islamabad, the Foreign Office said, “Pakistan and Sri Lanka enjoy close, cordial ties based on mutual trust and understanding.”

Diplomatic sources, circulating in the media, reveal that the main agenda behind Foreign Minister Qureshi’s two-day visit to Colombo is to extend a formal invitation to the Sri Lanka President, Gotabaya Rajapaksa to visit Islamabad.

Gotabaya formerly served as the Sri Lanka Defence Secretary, and he is considered to have close ties with Pakistan as like many other Sri Lankan army officers, he was trained in Pakistan. He attended the National University of Sciences and Technology (NUST), and even took some courses at the School of Infantry and Tactics, Quetta.

During his tenure as the Defence Secretary, Gotabaya masterminded the end of the longstanding Tamil militancy, and Pakistan remained a powerful supporter of Colombo’s mission to end the 26-year long Tamil insurgency.

Analysts and opinion-makers observe that Gotabaya’s electoral victory is a good omen for Pakistan and a setback for New Delhi. India and its western allies were backing Gotabaya’s political rival, Sajith Premadasa, as New Delhi is anxious over Gotabaya’s close ties with Pakistan and his pro-China stance.

Modi government seems jolted by the recent victory of Gotabaya Rajapaksa in Sri Lankan Presidential elections. The new President is pro-China & has strong ties with Pakistan dating back to his army career wen he was trained in Pindi & later graduated from Quetta Staff College. https://t.co/T4btFcMCOp— Kamran Yousaf (@Kamran_Yousaf) November 20, 2019

Gotabaya’s family has taken complete control of Sri Lanka, and his brother, Mahinda Rajapaksa has assumed the Prime Ministerial office of Sri Lanka. Earlier, Mahinda was the President of Sri Lanka from 2005 to 2015, and in 2015, he accused Indian intelligence agency RAW and certain western countries of orchestrating his defeat in the presidential election.

New Delhi is now attempting to straighten its ties with the Rajapaksa family, and last week, Gotabaya visited New Delhi and had a meeting with Indian Prime Minister Narendra Modi. Speaking to an Indian newspaper, Gotabaya said that the major apprehension New Delhi had was his close relations with China and Pakistan.

Power has changed in Sri Lanka, now the president is a Chinese supporter of the Rajapaksa family. In the … https://t.co/RpTs7pixKF pic.twitter.com/qtgooqLyvL

Gotabaya said that New Delhi should not “worry about his relationship with Beijing and Islamabad.”

“I think the main issues India could have with us would be on [our relations] with China or Pakistan, but if we don’t do anything that creates suspicions amongst Indian authorities, there will not be any problem.”https://t.co/sKlHAxtMrV— charith 🇱🇰 (@CharithTweets) November 30, 2019

Diplomatic channels reveal that the Narendra Modi-led Indian government is likely to undertake certain developmental projects in Sri Lanka to gain the trust of the new president, however, given the massive trust deficit between New Delhi and the Rajapaksa family, analysts argue that these bridges will take a long time to mend.