Nicki Minaj is going to be performing in Saudi Arabia and it is creating all types of controversies. Saudi women are enraged at event organizers for suggesting that they can only attend Nicki Minaj's concert in Saudi if they wear an abaya. Women have been calling out organizers for their dual standards.

Hip hop artist Nicki Minaj, known for her scantily-clad shows with twerking and half-nude dancers, will headline a festival in Saudi Arabia. The country’s dress code may not apply to Minaj, but Saudi women are expected to comply.

And there have been mixed reactions. https://t.co/V4epE9Np9u

Organizers of the Jeddah Season cultural festival, a project overseen by a Saudi government agency, announced on Tuesday that Minaj would perform at the event, scheduled for July 18. The musician’s stage act, which typically features provocative dancing and songs use vulgar language, has prompted cries of hypocrisy, aimed at a government that imposes austere restrictions on women.

One Saudi woman took to Twitter to call out the double standards. Her video has been viewed thousands of times and has gone viral.

No one in Saudi Arabia googled Nicki Minaj did they?”

“You can’t be f**king serious. Bring Micki Minaj to Saudi Arabia?” she asks in English before switching to Arabic. “What the f**k?! [Minaj] is going to go and shake her ass, and all her songs are indecent and about sex and shaking ass,” the young lady said in a highly-viewed video. ”And then you tell me to wear the abaya. What the hell?”

Cool video by #Saudi Woman wondering why she should be wearing a Abaya while Nicki Minaj can come “Shake her Booty” and sing about sex in Jeddah on 18th. HT @ayaelb https://t.co/vEo6WY2kVt

Saudi Arabia’s state-enforced dress code requires women to wear a long, cloak-like garment known as an ‘abaya,’ and cover their hair with a headscarf. Until recently, women were legally prohibited from driving on Saudi roads, and are still barred from many public activities without the permission of a male “guardian.” 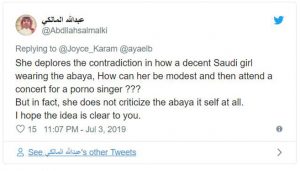 Others online slammed both the kingdom and the hip hop artist for agreeing to the gig at all.

Some suggested that perhaps the kingdom had not done its “due diligence” on Minaj’s expletive-laden discography, as it seems impossible authorities would have approved the booking after seeing her prior performances.

“No one in Saudi Arabia googled Nicki Minaj did they?” tweeted Kabir Taneja, while another user said Minaj “so clearly needs new representation, ‘cuz this is not only tone deaf, but misguided.”

No one in Saudi Arabia googled Nicki Minaj did they?