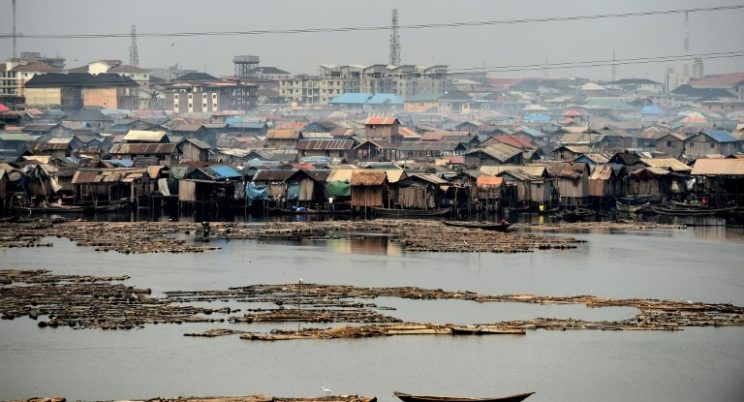 In the Ago Egun Bariga area of Nigeria’s commercial capital, Lagos, there is no road, no electricity, no running water and no rubbish collection. Now that high grass has blocked access to the water, there is no work either. The people of Ago Egun Bariga have made a living from fishing ever since their families first settled on the edge of the lagoon more than 50 years ago.

At the time, local chief Agemo Akapo’s grandfather lived comfortably surrounded by the tropical vegetation. But as urbanisation gathered pace at breakneck speed, Lagos’ population mushroomed from 300,000 people in 1950 to some 20 million today — and the trees disappeared. In their place are makeshift shanties as far as the eye can see.

In theory, OPEC-member Nigeria, Africa’s leading oil producer which churns out some two million barrels of crude every day, should not be in this position.

“We would like to have electricity, schools, hospitals, running water,” said Agemo Akapo. “But this is not our number one priority. They need to open access to the sea again, so that we can go to work, buy food and feed our children.” He added: “We live like doves in a cage.”

The Lagos state government has filled in vast stretches of the water with sand to build much-needed homes, contributing to major changes to the local ecosystem. As a result, the fishing boats of Ago Egun have lain idle in the mud for the last two years among the detritus of daily life.

The fishermen can no longer put to sea. Their wives can no longer sell the catch at market. There is no money to send children to school. “If my children can eat once a day, we can thank our god,” said Abiodun Kakini, who used to earn about 3,000 naira (about $8, 7 euros) a day selling fish her husband caught.

She now earns a little money smoking and selling large tilapia imported from the Netherlands. “I have to buy a carton of imported fish on credit. So, I have almost nothing left at the end of the day. I need to pay back my debts,” she told AFP. In just a few years, the people of Ago Egun Bariga have gone from poverty to extreme poverty.

The people of Ago Egun Bariga have made a living from fishing ever since their families first settled on the edge of the lagoon more than 50 years ago.

Oxfam this week published a sobering report that suggested the world’s 26 richest billionaires owned more wealth than the poorest half of the planet combined. Overall, the World Bank has said the number people living on the less than $1.9 a day — the benchmark of extreme poverty — has fallen overall.

But rates were rising in sub-Saharan Africa. Nigeria overtook India as the country with the most number of people living in extreme poverty last year, with 87 million people in dire financial hardship — or nearly half the country’s population.

The World Poverty Clock estimated that six Nigerians slip into extreme poverty every minute. Between now and 2030, it said 45.5 percent of the population or 120 million people will be living in extreme poverty. In Ago Egun Bariga, the statistics have faces.

The fishermen can no longer put to sea. Their wives can no longer sell the catch at market. There is no money to send children to school.

Five-year-old children carry heavy jerrycans of water on their heads, scale tilapia in brackish water or sell dried fish even before they have learned to read. Nigerians vote for a new president and parliament on February 16. Two weeks later, there are elections for new state governors and state assemblies. Places like Ago Egun Bariga give an indication of the task facing the country’s new political leaders.

Local chief Akapo said he had attended a political meeting the day before. “They told us to stick these posters on our walls. But once we vote for them, they disappear,” he said, gesturing to adverts for the ruling All Progressives Congress (APC).

For Emmanuel Onwubiko, the head of a local human rights association, both leading candidates for the upcoming polls have largely ignored the needs of those being economically left behind. “In Nigeria, politicians are busy playing politics and patronage strategies instead of implementing programmes to take people out of poverty,” he said.

President Muhammadu Buhari is proposing social assistance and micro-finance for the poorest.  His main challenger Atiku Abubakar, a wealthy businessman and former vice-president from the Peoples Democratic Party, is more market-driven.

Onwubiko complained there was no formal means of ensuring that politicians followed through on their promises once they get into power. “The military government looted public funds for decades but the politicians who have been elected since 1999 have also failed to solve this issue,” he added.

In theory, OPEC-member Nigeria, Africa’s leading oil producer which churns out some two million barrels of crude every day, should not be in this position. “Between 1960 and 2005 about $20 trillion was stolen from the treasury by public office holders,” said Oxfam.

“The combined wealth of Nigeria’s five richest men ($29.9 billion) could end extreme poverty at a national level,” it assessed. “Oil is not a curse,” said Onwubiko. “What we have is a political curse.”

Gorgeous Kate Middleton: Dresses She Wore During Her Pakistan Visit

Is the United States really concerned and willing to help Pakistan protect its economy?

Are both US conservatives & liberals being hypocrites over immigration?