NEFT launched by NLC in 2014 is now expanding and exploring new opportunities to provide logistic solutions to a country that desperately needs these. Cooperation between NEFT and Pakistan Railways to increase capacities and skill sets is the way forward for Pakistan.

NEFT (NLC Express Freight Train) has emerged as one of the most innovative strides made by NLC to facilitate trade and expand its organisation in terms of capacity building. This development will allow the NLC to emerge as a dynamic logistics solution provider for both local and foreign investors. With this initiative NLC will not only add to the national economy but will also add to overall logistic capacity in the country and will add to the skill sets and capacities available to Pakistan Railways. 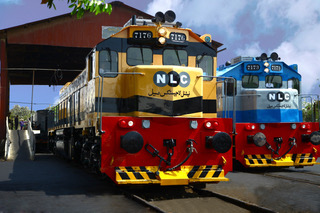 In line with its objectives for the expansion and development of the NEFT, the NLC purchased ten locomotives from the South Korean firm, KORAIL, which are being used by the Pakistan Railways under the wet lease agreement that was signed for 12 years in 2014. NLC is supporting Railways in training of Assistant Locomotive Drivers at Railways Walton Academy. Few years ago, when Railway operations were disrupted due to a strike NLC’s trained drives and assistance was of great help to Railways in handling the crisis.

The technical team of the NLC has been tasked with the responsibility of the maintenance of the locomotives, purchased from the Korean firm (KORAIL), while the Pakistan Railways will be responsible for marketing and operations. NEFT has emerged as the one of the most progressive, and profitable business units of NLC.

The transport and logistics sector of Pakistan includes railways, roads, ports, shipping, and aviation. In Pakistan, however, road networks dominate the mix

All the ten locomotives are currently being operated at full capacity, which has allowed this commercially viable development to generate substantial profits for the Pakistan Railways and the NLC. As mentioned above, in collaboration with the Pakistan Railways, NEFT has entered into a sustained program to provide training facilities to the locomotive drivers at the Walton Academy, Lahore.

The sustained program has so far trained 52 assistant locomotive drivers. These drivers add to the overall capacity and skill set available in the country and have proven immensely resourceful in ensuring that the locomotives run smoothly and efficiently.

As part of the new agendas for joint ventures, NEFT will be operating around 30 trains to Jia Bagga Multimodal Transit Hub in Lahore. This project will later be extended to the dry ports in Khyber Pakhtunkhwa’s Haripur and Azakhel regions as part of the China Pakistan Economic Corridor (CPEC) and a related project called, “Goods in Transit to Afghanistan” (GITA).

NEFT was launched in 2014, in view of the shortages of freight forwarding capacities in Pakistan. – where most industrial goods are carried from manufacturing centres and ports towards markets in trucks. Now, after successfully completing 5 years of its cargo operations, NEFT is now exploring new avenues and prospects of joint ventures in the rail sector. NEFT is eager to collaborate with logistics companies of China and Pakistan and enjoy “unbounded opportunities” under the banner of the China Pakistan Economic Corridor (CPEC).

NEFT seeks to play an instrumental role in the game-changer projects under CPEC with its operational and technical expertise.

For the sustainable economic development of any country, the transport and logistics sector should be robust and cost effective. Pakistan ranked amongst the worst in “Logistics Performance Index” (LPI) released by World Bank this year which indicates how neglected this sector is in the country. Pakistan took the 95th spot among 167 countries. It’s interesting to note that the top twenty on the LPI Index have the strongest economies in the world which shows that freight forwarding capacity is basically the driver of a modern economy.

The fact that Pakistan does not have a dedicated Ministry of Transport makes the measurement of the sector’s performance and identification of challenges difficult. For instance it becomes very tedious to assess factors like time spent, comparative costs and inefficiencies in freight management across the country. The transport and logistics sector of Pakistan includes railways, roads, ports, shipping, and aviation. In Pakistan, however, road networks dominate the mix. Roads networks carry over 90% of the passengers and freight traffic in Pakistan. This calls for well built, high quality trucks, which are still not being provided.

Recent public debate when government tried implementing the international standard “Axel Load Limits” revealed that country does not have as many trucks as needed for efficient and cost effective workings of the industry. Under pressure from the industry and corporate sector, government had to abandon the new scheme of harmonising its standards with international norms – which is a tragedy because heavy trucking loads erode roads, increase maintenance costs, and are responsible for accidents.

Pakistan Railways, which in the past used to be more economical and effective for the industry (1960-70s) now handles only six percent of the national freight traffic. This modal imbalance has led to pollution, overloading, poor safety and congestion. The transportation cost has also increased due to imported fuel.

According to World Bank’s study, a single freight train can replace one hundred trucks at a time. In the UK, the railway carries 75% of the consumers goods to the distribution points. Pakistan has not been able to invest and expand capacities of railways over the past few decades thus it has steadily increased its reliance on roads. Country’s population in 1972 was around 63 million; it is now around 220 million with much bigger needs of goods transport between ports and manufacturing centres and markets. Railways are considered the most cost-effective means of freight forwarding as they can transport one ton of goods to 250 miles in one gallon of fuel compared to 90 miles by road. 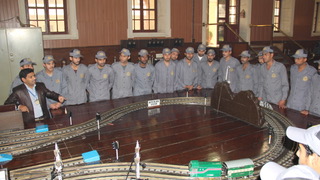 The successive Pakistani governments, as mentioned above, have failed to upgrade and maintain the 8200 km of railway network that Pakistan had inherited at the time of partition. Population of West Pakistan (now Pakistan) was only around 31 million at that time in 1947. Unfortunately, the policy makers have remained focused on the road networks which has led to a subsequent decline in the freight carrying capacity of the railways. Sheikh Rashid, the current Railway Minister, has been asked this question many times but he has explained that no immediate increases in Railway’s freight forwarding capacity are possible.

In 2015, the World Bank reported that the logistics sector in Pakistan could capitalize on untapped potential worth of approximately $30.77 billion. NEFT is thus taking steps to explore this potential and build capacities for NLC and the country. It will help Pakistan Railways in the process by bringing locomotives, setting standards and creating skilled work force.

NLC Express Freight Train (NEFT) would help Pakistan in capitalizing on emerging opportunities as well as enhancing the productivity of vulnerable industries. Moreover, the quick movement of cargoes by train would help reduce road congestion and the pressure on country’s ports would somewhat reduce. However much more is needed. Dedicated freight trains also promote economic growth as the cost of doing business goes down. Perhaps the budding cooperation between NLC and Pakistan Railways is the way forward to meet these challenges of national economy.