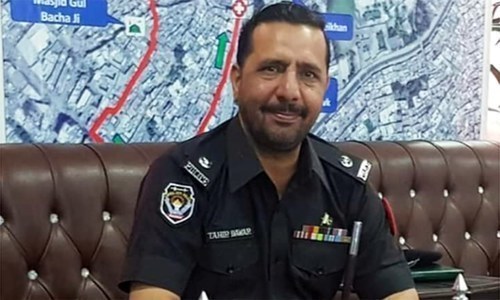 No major headway has been made in the murder investigation of the late SP Tahir Khan Dawar. The government had decided to form a JIT to investigate the assassination of the police officer.

However, the brother of the late Superintendent of Police on Saturday rejected the seven-member joint investigation team (JIT) formed to probe his sibling’s brutal murder.

The Superintendent of Police (SP) Rural Peshawar, Tahir Khan Dawar, who went missing from Islamabad last month, was killed in Afghanistan. SP Dawar was kidnapped from G-10/4 sector of Islamabad on Oct 26.

A picture allegedly of SP Dawar went viral on social media in which he could be seen brutally murdered; the body said to be of the officer was found in Nangarhar province of Afghanistan.

The piece of paper on his chest, referring to SP Dawar with his first name, reads,” cop who had arrested and killed many militants has met his fate.” The note is written in Pashto language and carries the name of ‘Wilayat Khorasan’; a term militant organization Daesh which calls itself Islamic State (IS) uses for the Pak-Afghan region. The note also threatens to do the same to other people if they are not cautious enough.

Brother of SP Dawar, Ahmaeduddin, told the reporters that victim was posted in Peshawar, and was in Islamabad for personal engagements. He went out on Oct 26, his family lost contact with the police officer as his phone went off at around 7: 45 pm. His wife right away reached out to the police and informed them of his disappearance as family suspected he was kidnapped.

The government had just recovered from three-day long lockdown of the country by TLP workers and its aftermath after the release of Aasia Bibi.

Mr. Dawar belonged to North Waziristan and was recently posted as Rural SP in Peshawar. Before that, he had served as DSP Fakirabad. He also served in Federal Investigation Agency (FIA) and was posted at the Peshawar International Airport. Tahir Dawar, known as a vocal police officer, had survived two suicide attacks while he was posted in Bannu when militancy was at its peak.

In the latest development, the Director-General of the Inter-Services Public Relations (ISPR) Major General Asif Ghafoor has condemned the murder of Superintendent Police (SP) Tahir Dawar in Afghanistan. He has also asserted this was an act where more than one terrorist organization was involved.

In a series of tweets, DG ISPR said SP Tahir Dawar’s abduction, move to Afghanistan and follow up behavior by Afghan authorities raised questions which indicated the involvement or resources more than that of a terrorist organization in Afghanistan.

Brutal murder of SP Tahir in Afg is highly condemnable. We have lost a brave police officer. His abduction, move to Afg, murder and follow up behaviour of Afg authorities raise questions which indicate involvement or resources more than a terrorist organisation in Afg. (1of2).

The DG ISPR also said that while investigations by Pakistani authorities were in process, Afghan security forces should cooperate in border fencing and bilateral border security coordination to deny the use of Afghan territory against Pakistan.

While investigations by Pakistani authorities are in process, we reiterate that Afgan security forces to cooperate in border fencing and bilateral border security coordination to deny use of Afghan territory against Pakistan. (2of2).

The refusal of Afghan officials to the Pakistani delegates raised many questions in Pakistan. Prominent media person Dr. Moeed Pirzada tweeted “Afghan Govt’s refusal to hand over the coffin of a Pakistani Officer to Pakistan Govt & insistence to hand over to Mohsin Dawar raises questions about the role of Afghan Govt in the whole tragic killing of Pakistani Police Officer & Kabul’s overt backing of PTM”

Social media users urged the government to seriously look into the matter. “#ISPR must investigate the Mohsin Dawar’s role in the Tahir Dawar Dawar’s murder. Why on earth Afghanistan didn’t give the body to Pakistan’s officials and instead they handed it to their puppet Mohsin Dawar”

#ISPR must investigate the Mohsin Dawar's role in the Tahir Dawar Dawar's murder. why on earth Afghanistan didn't give the body to Pakistan's officials and instead they handed it to their puppet Mohsin Dawar

Analysts believe that the Afghan officials should have handed over the dead body of Mr. Dawar to the Pakistani delegate without any question. The refusal to State Minister for Interior is demonstrative of the Afghan government’s unstated support for PTM which is widely seen with doubts in Pakistan.

Moreover, the murder of SP Dawar has exposed the law and order situation in Pakistan where a police officer got abducted from the Federal capital and was sent to Afghanistan despite the presence of troops on the broader.

The government had just recovered from three-day long lockdown of the country by TLP workers and its aftermath after the release of Aasia Bibi.

Prime Minister Imran Khan has said that “have followed the shocking tragedy of the murder of SP Tahir Khan Dawar & ordered KP govt to coordinate with Islamabad police in holding an inquiry immediately. MOS Interior Shahryar Afridi has been tasked to oversee it with an urgency & present the report to me.”

The inquiry will help to identify the killers involved in the brutal murder of the police officer. It will also help to understand the role of PTM and its connections with Afghanistan in order to make policies in the future.

Meanwhile, some elements within Pakistani intelligentsia are trying to give another color to the heinous murder of SP Dawar. Some are indirectly accusing the intelligence agencies of the murder of this police officer.

PTM is active on social media and is spreading propaganda against the state. May social media users have been exposing the hidden agenda of PTM on Twitter.

The murder of the brave police officer is indeed condemnable. However, it has once again exposed the weakness of the state in handling matters of national security. The delayed response of the state in this murder and the irresponsible statements given by some government officials has exacerbated the problems for the country.

The government had just recovered from three-day long lockdown of the country by TLP workers and its aftermath after the release of Aasia Bibi. The atrocious murder of SP Dawar has once again placed the government on the backfoot.

Social media is abuzz with conspiracy theories and the state’s narrative seems to have been lost in it. Pakistan is facing multiple threats both from inside and outside. The information warfare launched against Pakistan by its enemies is in full swing and it seems to be losing the war of narrative.

PM Khan has worked hard to bridge gaps between the political class and the military. This achievement must be capitalized upon and a united front must be established to counter kinetic and non-kinetic threats to the country.

The government must now devise a strategy to counter the internal threats. Police and law enforcement agencies must be overhauled to counter these threats. The government should also engage media in a constructive debate and encourage it to help the state win the information war waged against it.

Military, opposition parties and academia must also be encouraged to work side by side with the government to make Pakistan safe and great. However, so far, both the government and the military are on defensive mode. Both seem to be working in isolation to protect their credibility. This division is only favoring those who are hell-bent upon destabilizing Pakistan.

Read more: Kidnapped from Pakistan, murdered in Afghanistan: The curious case of SP…

PM Khan has worked hard to bridge gaps between the political class and the military. This achievement must be capitalized upon and a united front must be established to counter kinetic and non-kinetic threats to the country.

Spin Wizard Saeed Ajmal hangs his boots: will the PCB give him a send-off?

Tax collection from Karachi dwarfs contributions from all other major cities combined: report