No respite for Shahbaz: NAB arrests him in Ramzan Sugar Mills Case 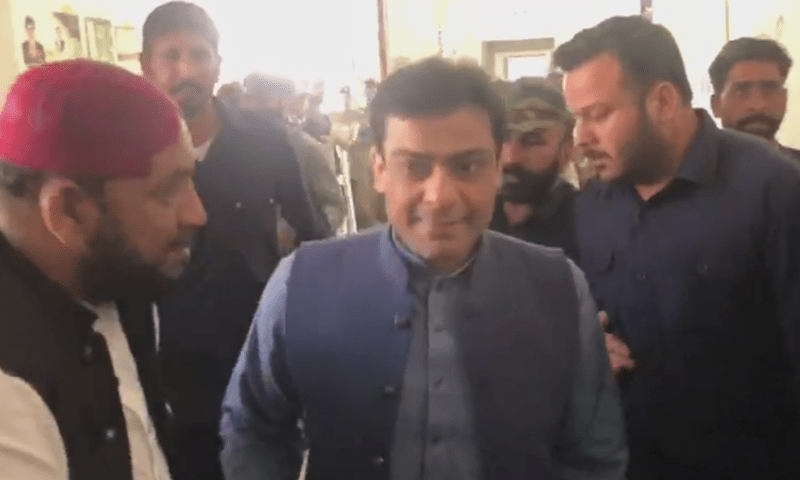 Shahbaz Sharif, Pakistan Muslim League-Nawaz (PML-N) President and Leader of the Opposition in the National Assembly, has been presented before Accountability Court (AC) in Lahore by NAB where he was arrested. During the hearing, NAB prosecutor said, “We are arresting Shehbaz today on November 10 in the Ramzan Sugar Mills case.”

Sharif who has been in the custody of NAB since October 5, was flown to Lahore from Islamabad for his court appearance. The leadership of PMLN along with a large number of workers have gathered outside the premises and were seen chanting slogans in favor of Shahbaz Sharif and against NAB.

Security has been increased in the wake of clashes between PMLN workers and personnel of police force. As his transit remand ends today– that was granted by Accountability Court for the first time On October 29, and since then extended twice– Shahbaz is presented before the Accountability Court, accompanied by officials from the National Accountability Bureau’s Lahore office.

NAB has detained Shahbaz Sharif and has been investigating him in three cases; Ashiana Housing Society, Saaf Pani and now for having assets beyond means. According to the anti-graft body, Shehbaz canceled the contract awarded to M/s Ch A Latif & Sons for infrastructure development of Ashiana Iqbal Housing Project and awarded it to CASA Developers, misusing his authority and causing a huge loss to the national exchequer.

His sons, Salman and Hamza have also been investigated in these cases. Hamza Shahbaz is also facing an inquiry in the Saaf Pani Company for presiding over some meetings of the Board of Directors and issuing orders regarding award of contracts while NAB said Hamza was not even the member of the board.

Hamza appeared before a combined investigation team which interrogated him for more than two hours about the details of his family’s property in Pakistan and abroad. Salman, on the other hand, had fled to London after the Bureau sought details of his family properties.

The leadership of PMLN along with a large number of workers have gathered outside the premises and were seen chanting slogans in favor of Shahbaz Sharif and against NAB.

As per the new rule, SC orders are required to put the name of any person on ECL. Salman, taking advantage of that, flew out of the country before the orders could be obtained.  Hamza too has got pre-arrest bail.  Shahbaz Sharif’s son-in-law Imran Ali Yousaf is also reportedly hiding in London after being declared a proclaimed offender by the Accountability Court in the Punjab Saaf Pani Company and the Punjab Power Development Company (PPDC) cases.

According to the sources within NAB, Shahbaz Sharif has not been cooperating and even in the court he took podium himself and started complaining that he was being victimized. Not only him, but leaders of PMLN have also been holding press conferences to malign NAB.

Shahbaz’s speeches were aired on all news channels as the PTI-led government has allowed state channel to give air-time to opposition leader too, unlike previous governments of PMLN and PPP, when state media was more of a mouthpiece of government rather being an independent reporting body.

Salman, on the other hand, had fled to London after the Bureau sought details of his family properties.

To clear the position of NAB, Director General NAB Lahore Shahzad Saleem appeared on 5 television channels to give a point of view of NAB. As per DG, he was authorized by Chairman PEMRA. PMLN used media to pressurize and bash NAB, the reason DG said he had to appear in 5 shows, including that of Kashif Abbasi, Shahzeb Khanzada, and Kamran Khan.

Read more: NAB initiates probe against Nawaz, Abbasi and Shehbaz over ‘misuse of…

The opposition has filed privilege motion against DG NAB Lahore in national assembly. Chairman NAB has asked PEMRA for the recordings of all programs for the damage control exercise. Meanwhile, Supreme Court has initiated hearing on the case pertaining to Fake degree of DG NAB Lahore.

The SC will hear the case on November 12; the matter of fake degree of Shahzad was brought up in the apex court last year during the hearing of a suo motu case on alleged illegal appointments within the NAB.

Lt Gen Asad Durrani - 19 June 2021
Not because it’s incredibly good, or incredibly bad, but simply because it has no credibility. States that lie through their teeth usually have none. Some...

The only person who is glad that Barack Obama isn’t the U.S president seems to be Barack...

Why is the timing of Bilawal’s press conference important?