“Not a Heat-wave”: Soaring Temperatures in Karachi raise fears 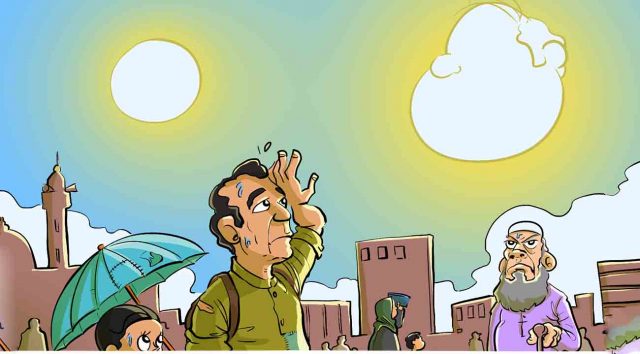 Despite temperatures hitting almost 40C in Karachi, the Meteorological Department said Tuesday that there is no imminent threat of a heat wave. Despite its reassurances, there are creeping apprehensions of a repeat of the killer heat of 2015 which led to the deaths of 1200 people in the port city.

“Temperatures will gradually soar. And, the weather will remain as usual in the next two months,” said Pakistan Meteorological Department Regional Director Shahid Abbas . “Karachi citizens need not worry as there is no threat of heat wave in the city.”

Keeping in view the rising temperature, the center has been set up to assist people who may be suffering from heatstroke and create awareness about the steps that can be taken to prevent it.

He said that the soaring temperatures cannot cause much trouble to the citizens due to low humidity, adding that mercury levels will start going down from Wednesday because of the sea breeze. The Met Office chief said Karachi is witnessing a hot spell due to a change in the wind direction, adding that the sea breeze has stopped blowing, because of which hot and dry winds from the country’s plains have changed the weather in the city.

“We are expecting this hot and dry spell to continue until Friday, following which the weather would turn a little pleasant,” he said. Advising people to keep themselves hydrated and to avoid working under the Sun for long during noon and afternoon hours, Rashid said the elderly should take precautionary measures because the hot weather can create health issues for them.

Three years ago, Karachi experienced the deadliest heat wave Pakistan had seen in over 50 years. Starting from June 19 that year, the coastal city witnessed sweltering heat that continued for more than five days and in its wake left over 1,200 people dead and 40,000 suffering from heatstroke and heat exhaustion.

Environmentalists and weather experts believe that in the coming years heat-waves would become a routine phenomenon in Pakistan, especially in Karachi where the weather used to remain normal and pleasant because of climate change, the Arabian Sea’s rising temperature and frequent changes in wind directions in summers. A lack of trees in Karachi, the absence of water pools and open spaces with greenery, and growing concrete structures are basic causes of rising temperatures.

The Met Office chief said Karachi is witnessing a hot spell due to a change in the wind direction, adding that the sea breeze has stopped blowing, because of which hot and dry winds from the country’s plains have changed the weather in the city.

The phenomenon of urban heat islands especially has been detrimental for its inhabitants in this respect. An urban heat island (UHI) is an urban area or metropolitan area that is significantly warmer than its surrounding rural areas due to human activities. The temperature difference usually is larger at night than during the day, and is most apparent when winds are weak. UHI is most noticeable during the summer and winter. The main cause of the urban heat island effect is from the modification of land surfaces.

It is advised for people of Karachi to increase tree cover, establish water pools at open spaces and avoid expansion of the city to mitigate the effects of climate change, including frequent heat-waves. Using light-colored concrete has proven effective in reflecting up to 50% more light than asphalt and reducing ambient temperature.

Read more: What is the biggest threat to Pakistan?

With temperatures expected to remain well into the high 30s for the next few days, the Sindh chapter of the Pakistan Red Crescent Society has established a heatstroke center at Hilal-e-Ahmer House near Teen Talwar, Clifton, to facilitate people.

Keeping in view the rising temperature, the center has been set up to assist people who may be suffering from heatstroke and create awareness about the steps that can be taken to prevent it. The center offers water and juices to commuters and pedestrians to combat dehydration and any heat-related health emergency.

Has Speaker NA decided not to issue production orders of arrested lawmakers?