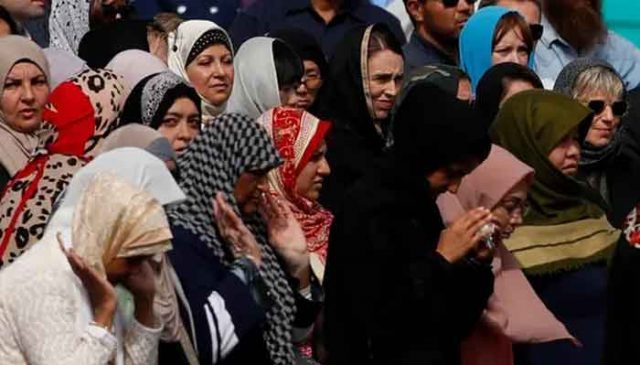 Prime Minister Jacinda Ardern and other New Zealand women appear wearing hijab for Friday sermon in a bid to express solidarity with Muslims. Thousands of mourners gathered outside Al-Noor mosque, Christchurch, the place that witnessed bloodshed of 50 Muslim worshippers in a week ago mass shooting.

New Zealand women donned in headscarves made up the large part of the mourners, while PM Ardern dressed up in a black dress and hijab read out the Hadith of Holy Prophet Muhammad (PBUH): “According to the prophet Mohammed… The believers in their mutual kindness, compassion, and sympathy are just like one body. When any part of the body suffers, the whole body feels pain. New Zealand mourns with you, we are one”.

She further stated that “New Zealand mourns with you” to the Muslim community.

One of the women, Ashman attending the gathering stated, that, “I wanted to say, ‘We are with you, we want you to feel at home on your own streets, we love, support and respect you.”

The New Zealand women appearing in headscarves has been immensely appreciated by the Muslim community.

“Why am I wearing a headscarf today? Well, my primary reason was that if anybody else turns up waving a gun, I want to stand between him and anybody he might be pointing it at. And I don’t want him to be able to tell the difference, because there is no difference,” said Bell Sibly, another woman attending the gathering.

Hijab has been a topic of contention in West, where many western thinkers hijab, face veil, headscarves are a sign of female oppression. The New Zealand women appearing in headscarves has been immensely appreciated by the Muslim community.

On the other hand, the Muslims communities around the world have been making calls for a Nobel Prize for New Zealand Prime Minister Jacinda Ardern, who has shown remarkable leadership skills that have overshadowed bigotry, racism and anti-Islamic sentiments in the last few days.

People from all walks of life have expressed solidarity with the Muslims in their own way in New Zealand.

Difficult to put into words the scenes we saw today as New Zealand marked the one week anniversary of the #Christchurch mosque massacres. For me it’s this photo I took shortly after prayers ended — to me it sums up how the nation has responded to the gunman’s race hatred 🇳🇿 🕌 pic.twitter.com/2KBiYXvaXu

From wearing Hijab to performing Haka, a ceremonial cultural dance for the victims of Christchurch shooting, New Zealand has won hearts of Muslims with the kind gestures.

Pakistan in the last decade: Democracy, Corruption, or Development?

Three local releases to light up the silver screen this weekend