The common refrain is that Saudi Arabia has launched an oil price war against Russia by boosting production and selling at discounted price, which, coming on top of the pressure from demand destruction caused by climate change action and the onslaught on the global financial system from the coronavirus pandemic, has led to oil price plummeting by some 30% in the past week.

But is that the whole story? Or, is that the real story? A complex set of factors are at work here.

The “price war” of the two largest oil producers could hurt other countries, especially the US. If Washington does not follow up with tough defensive measures, then shale companies will begin to lose market share over time

Why did Russia take such a stance? The Kremlin spokesman Dmitry Peskov said on March 10 that Moscow was considering different options apropos the situation on the markets before the OPEC+ negotiations in Vienna three days back, and a “variety of options were calculated and considered in advance.”

Basically, Moscow’s position is that deeper production cuts won’t solve the problem, which is necessarily about the drop in demand for oil.

Putin told a meeting of Russian energy officials and producers on March 1 that the prevailing oil prices [around $50 per barrel] was an acceptable level for Russia since the country’s budget is pegged on an average Brent crude price of $42.40 a barrel.

Putin said at a meeting of energy officials in Moscow on March 1, “Our accumulated reserves, including the National Wealth Fund, are enough for ensuring a stable situation, the fulfillment of all budget and social liabilities, even under a possible deterioration of the global economic situation.”

However, he added, Russia realized the need for some action “including together with foreign partners.”

According to the transcript released by the Kremlin, Putin told the meeting that OPEC+ has “proved to be an effective instrument to ensure long-term stability on global energy markets.

Thanks to that, we have obtained extra budget revenues and, what is important, provided a possibility for upstream companies to confidently invest in promising development projects.”

Clearly, Moscow was not heading for the exit door at the OPEC+ meeting in Vienna on March 6. The point is, the Saudis ignored Russia’s compromise position, which proposed extending the OPEC+ agreement with existing quotas and continuing to accurately monitor the volatile market situation.

Whose interests it was that Saudi Arabia was serving? It is known that the US President Donald Trump spoke on the phone to the Saudi Crown Prince Mohammed bin Salman on the eve of the Vienna meeting.

The Russian experts suspect that Saudi Arabia has been playing a double game. According to them, Riyadh and Washington have been manipulating oil prices (and the exchange rate) in an attempt to squeeze Moscow out of the global energy market and destabilize the political situation in Russia.

Indeed, in the geopolitical arena, Saudi Arabia has historically played on the side of the US, and it so happened that these two countries have become the main beneficiaries of the OPEC+ deal.

Trump brilliantly turned the OPEC+ deal (which aimed at stabilizing oil prices in the backdrop of low cost of hydrocarbons) into an expansion tool for American shale companies.

The high oil prices (thanks to OPEC+ deal) made American shale oil production profitable, and the US seized the opportunity to complete the creation of a big export infrastructure and entered new large markets (such as India.)

Saudi Arabia too gained immensely out of the OPEC + deal, as evident from its move on the IPO of Saudi Aramco to generate funds for MbS’ ambitious program of social and economic reforms under the rubric Vision 2030.

On the contrary, the OPEC + deal essentially meant Russia’s voluntary retrenchment from the market, which of course meant the loss of potential income.

Thus, by saying “Nyet” to the Saudi call for another cut in oil production by Russia, Moscow essentially signalled at the Vienna meeting that it will no longer subsidize the US’ shale oil production.

Having said that, it is entirely conceivable too that MbS also would have had his own considerations in flooding the market when world demand is collapsing.

The succession struggle within the royal family is intensifying and the crisis in the oil market and the ensuing panic within the royal family may have provided a smokescreen for MbS to crack down on his political opponents to strengthen his own position as the heir apparent to succeed King Salman. (In fact, the crackdown is continuing.)

The Russian Prime Minister Mikhail Mishustin has said, “We did not initiate the withdrawal from the agreement [OPEC+ deal].

On the contrary, we proposed to extend the agreement on the existing terms, at least until the end of the second quarter or for a year, so as not to complicate the situation that has developed with the spread of coronavirus.” But, it stands to reason that Russia was prepared for such a loss in prices. Starting from April, all production restrictions will be lifted.

It was especially irked by the U.S.’s use of sanctions to prevent the completion of a pipeline linking Siberia’s gas fields with Germany, known as Nord Stream 2

Russia has sufficient reserves for the long term, despite low oil prices. Mishustin said, “We have been living in conditions of rather low inflation for several years now, so we have a large margin of safety: the Bank of Russia’s gold and currency assets exceeded $570 billion, the volume of liquid assets of the National Wealth Fund is estimated at more than 10 trillion rubles, and even at steadily low oil prices this will be enough for many years to compensate for the budget losses of these funds.”

Besides, Russia has been working on additional import substitution measures in industries and agriculture.

In sum, Russia seems to anticipate that the “price war” with Saudi Arabia may not end anytime soon.

There is consensus among experts that both countries can survive even at prices well below $30 per barrel, being in a position to dip into their foreign currency reserves (roughly on par at around half a trillion dollars) although Russia is far better placed insofar as its fiscal breakeven oil price is estimated to be around $42 per barrel whereas for Saudi Arabia’s fiscal equilibrium point is $80.

The economy of Saudi Arabia is oil-dependent and low commodity prices will cause a serious budget deficit. But it can compensate for lost income through reserves, borrowings, and even the devaluation of the national currency.

Saudi Arabia can live off the price of $30 per barrel for several years and it is a fair estimation that Saudi Aramco, given the particularities of its fields, can safely produce oil and at $15 per barrel “not just for a long time, but almost forever,” as a Russian expert put it.

Russia too has deposits where production costs are very low due to the proximity of transport infrastructure. But the “price war” of the two largest oil producers could hurt other countries, especially the US. If Washington does not follow up with tough defensive measures, then shale companies will begin to lose market share over time.

Russia and Saudi Arabia have a common interest in increasing their production and forcing the US shale producers to leave so that the market will be able to balance itself out in the next 2-3 years.

The crunch time is approaching for the US shale industry as all restraints on production expire by end-March, and everyone can produce at will. 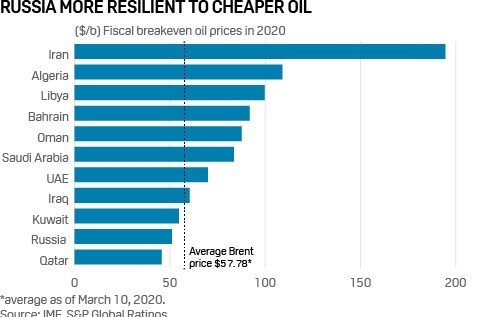 Oil could easily be in the $20s at any moment. On Monday, Brent crude oil plunged below $30 for the first time since 2016. An oil market bust could quickly plunge Texas, North Dakota and Appalachia, among other places, into a recession.

Already, the idea of a federal bailout of some sort for US oil and gas producers has floated up in the White House with Harold Hamm, founder of Continental Resources Inc. and sometime energy adviser to the president, called on the Trump Administration to help domestic frackers fight off low-priced barrels.

What emerges is that despite their differences, Saudi and Russia have a mutual interest in seeing the current collapse in prices damage US shale producers who now look vulnerable.

Trump announced late Friday the Federal Government will fill up the Strategic Petroleum Reserve “to the top” to help support the energy industry.

But despite the presidential intervention, the coronavirus pandemic destroys demand as airlines cancel flights and global trade seizes up. The International Energy Agency forecast on March 9 a full-year reduction in demand of 90,000 b/d in 2020.

Over and above, the US economy is entering a period of recession due to the pandemic and the crisis is of gigantic magnitude, with a “sudden plunge in economic activity across the nation and a pace of sharp market swings not seen since the Great Depression,” as Politico wrote Monday.

Suffice to say, this is not exactly a Saudi-Russian oil price war. It has a deceptive look and even seems like a Saudi-Russian project, hurt by the explosive appearance of the American fracking industry, to retrieve the large chunks of their lost market share.

There is a lot of bitterness all around too. A Bloomberg analysis noted, “Russia was increasingly angry with the Trump administration’s willingness to employ energy as a political and economic tool.

It was especially irked by the U.S.’s use of sanctions to prevent the completion of a pipeline linking Siberia’s gas fields with Germany, known as Nord Stream 2. The White House has also targeted the Venezuelan business of Russia’s state-oil producer Rosneft.”

Alexander Dynkin, president of the Institute of World Economy and International Relations in Moscow, a state-run think tank, has been quoted as saying, “The Kremlin has decided to sacrifice OPEC+ to stop U.S. shale producers and punish the U.S. for messing with Nord Stream 2. Of course, to upset Saudi Arabia could be a risky thing, but this is Russia’s strategy at the moment – flexible geometry of interests.”

Read more: Deadly viruses may escape: US shuts down its bioweapon lab

There has been all along much resistance from within the Russian oil industry to the OPEC+ deal of curbs on production. Possibly, that lobby has added to the Kremlin’s own disappointment lately that the expected Saudi investments in Russia haven’t materialized.

Nonetheless, the Russian and Saudi energy ministries keep cordial relations and the diplomatic mechanisms of the OPEC+ group are still in place, keeping the door open for the two sides to tango again. OPEC+ isn’t over, for sure.

OPEC observes oil market is under abrupt stress, supply will be disrupted

Is Nawaz Sharif now looking for a deal?

Is Nawaz Sharif now looking for a deal?