Video, Once upon a Virus, released by China's state media, Xinhua, makes fun of American reactions to Corona pandemic and Trump's bad management. But US analysts think the video appears to be part of China's attempts to distract from its initial coronavirus mismanagement. Perhaps China's state media making this mocking video - when more than 60,000 Americans have died - was not a good idea. 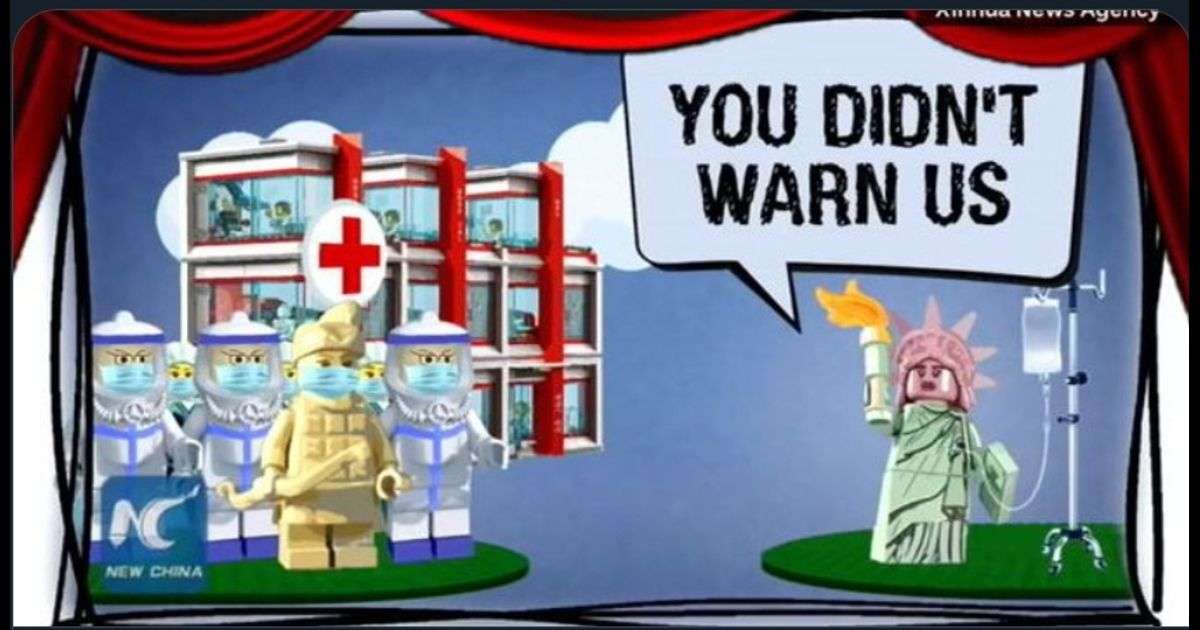 Chinese state media network, has released a video that mocks the United States’ coronavirus response. It tries to ‘expose’ and belittle Trump Administration’s claims of an initial Chinese COVID-19 coverup.

The short animated video, from Chinese state media, starts with the introductory text ‘Once Upon a Virus’. It takes the form of a back-and-forth between China and the US. The China is being represented by a Lego terracotta warrior and a team of doctors wearing hazmats, and the US by the Statue of Liberty.

Once upon a Virus: Americans don’t see it as a joke

Most Americans are convinced – like Trump and his cabinet – that Chinese tried a cover up. Virus was active in and around Wuhan, from at least November of 2019. Only this could explain the first diagnosed case on 1st December. Americans suspect that World Health Organization (WHO) was trying to put a lid on the extent of epidemic in China. Reasoning is that China wanted to avoid negative outfall and publicity – and perhaps thought that it will manage to control the spread of epidemic.

It is this line of reasoning, under which Trump blames Tedros Adhanom, DG WHO for a cover up. Argument is that China had supported his Adhanom’s candidature in 2017 and now it was the pay back time. It is this strong belief that has led Trump administration to suspend WHO’s funding.

In 2019, United States provided around $453 million to the World Health Organization – much above its “assessed country payment” of $128 million. China had initially paid $28 million, for 2020 however given the Corona pandemic it paid another payment bringing the total to $44 million. Later when the US suspended the WHO funds, China again paid $30 million bringing its total payments to around $74 million.

It's great to see Chinese state media promote this bullshit propaganda and lies because all it is doing is galvanizing the western world to destroy China https://t.co/cxDaxnBtwS

Once Upon a Time: What video says?

The dialogue begins with the Chinese warrior who stated they had discovered a dangerous new virus, to which the Statue of Liberty replied: “It’s only a flu … Don’t wear a mask”, adding that China’s “stay at home” measures were a violation of human rights.

The video purports that the US did not heed warnings from the Chinese Government but later accused China of “giving false data”.

US president Donald Trump has scapegoated both China and the World Health Organization (WHO) for COVID-19 disaster. He said, “the world received all sorts of false information about transmission and mortality”.

The video also mentions US’s decision to halt funding of the WHO, which Mr Trump said promoted China’s “disinformation” about the virus, “failed in its basic duty” and “must be held accountable”.

“The WHO failed to investigate credible reports from sources in Wuhan that conflicted directly with the Chinese government’s official accounts,” Mr Trump said at the time.

Read more: China accuses west of ‘barefaced lies’ over its handling of coronavirus

President Trump claimed the WHO was ineffectual in the initial weeks of the coronavirus outbreak.

The video also noted the US’s labelling of lockdown measures the communist country implemented were “barbaric”.

“It will magically go away in April,” said the Statue of Liberty figurine, echoing a statement made by Mr Trump earlier this year. Chinese embassy in France also tweeted this video.

COVID-19 had claimed 233,257 lives as of Friday morning, according to data from Johns Hopkins University, with more than 3.2 million cases confirmed worldwide.

The US has reported the highest number of cases surpassing one million infections on Thursday with 63,019 confirmed deaths from the virus.

Social media users, across the western world, suspect that China had tried to cover up the virus when doctors first reported it. It is important to note, when whistleblower Doctor Li Wenliang was threatened by authorities for warning the public about the virus, and then later died from the infection while working to save others.

However reactions depend upon where you are. In Pakistan most social media users are sympathetic to China and ignore US protestations.

Trump’s senior adviser and son-in-law, Jared Kushner had kept the president misinformed – some sources argue. Kushner was more concerned with the stock market than with public health, they point out.

One Republican briefed on the administration’s coronavirus response told Vanity Fair that, as early as mid-January, advisers were sounding alarms, but “Jared kept saying the stock market would go down, and Trump wouldn’t get reelected.”

Another source said that on March 11, as the World Health Organization declared the outbreak officially a pandemic, Kushner still pushed Trump not to declare a national emergency, freeing vital funds and resources for states, because “it would tank the markets.”

Read more: China roars back at US; says Washington should address concerns of its own citizens

Echoing his father-in-law, Kushner said the pandemic would “miraculously go away” by April due to the warmer weather. He added, “I think you’ll see by June a lot of the country should be back to normal, and the hope is that by July the country’s really rocking again.”

US demanding COVID-19 reparations from China?

U.S. government, according to some sources, has begun to explore proposals for punishing or demanding financial compensation from China for its ‘mishandling’ of the coronavirus pandemic. The move, if transpires, could splinter already strained relations between the two superpowers.

Earlier, in third week of April social media was swarming with the news that Germany has demanded damages of around $149 billion (£130 billion) for coronavirus damages. However it is now clear that German government has not sent any such bill to China. It was actually a tabloid newspaper in Germany called “Bild” which issued a mock bill to China after assessing damages to the country’s economy due to Covid-19. The newspaper said China owes Berlin around 149 billion (£130 billion) for coronavirus damages. Perhaps the speculations about the US mulling over claiming damages from China are just speculations. But irrespective of that, the future of Sino-US relationship looks tense.