One Christmas for Christians: Why different Eid Days for Muslims?

Many wonder if all Christians celebrate Christmas on one day then why all Muslims can not celebrate Eid ul Fitar on one particular day? How come American Muslims celebrate before Pakistanis and Indians? Answer to this question may be informative, interesting and may end up redeeming the question itself. Read on! 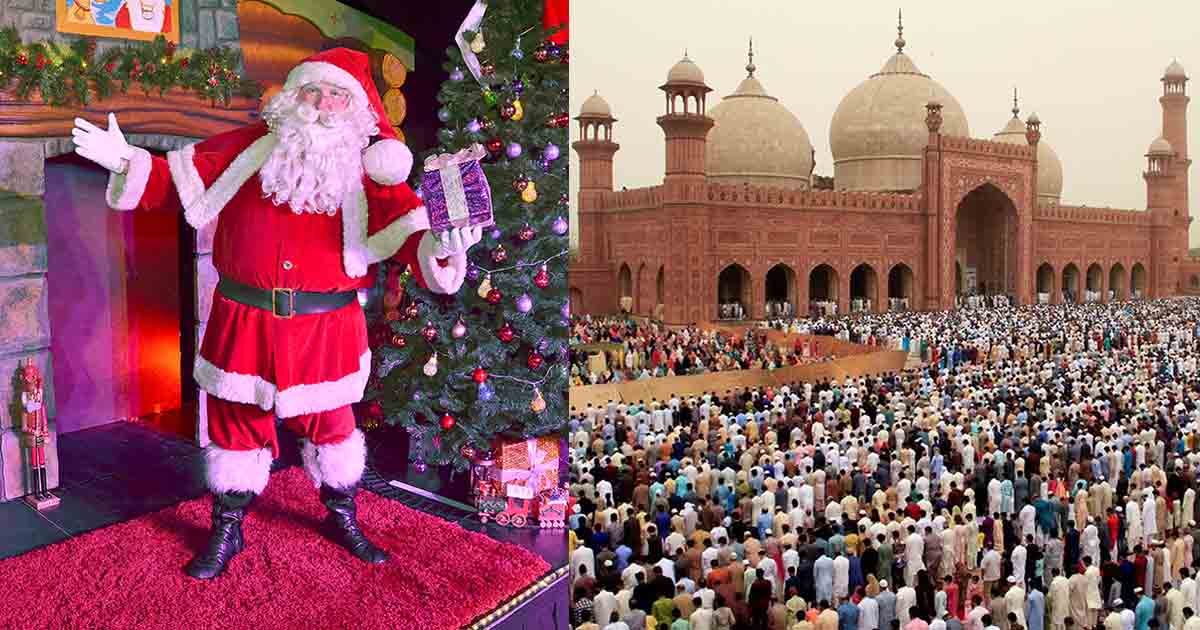 End of the holy month of Ramadan is at hand. And soon, Eid ul Fitr will be celebrated by Muslims world over. However, Pakistanis, Saudis, Egyptians, Turks, Americans and British Muslims may not be celebrating Eid the same day. This despite the fact that Islam more than any other religion or philosophy stresses upon a common brotherhood of its followers. Will it not be wonderful and politically uniting if all world of Islam gets to celebrate Eid ul Fitr the same day?

One Christmas for Christians: Why not One Eid for Muslims?

Equally surprising is the fact that Eid in Saudi Arabia and the western countries – USA and Canada – may be celebrated before India and Pakistan though in terms of time zones North America is at least 10 hours behind the Indo-Pakistani sub-continent and Saudi Arabia is 2 hours behind Pakistan and 2.5 hours behind India. Answers to these questions are interesting, complex and may end up redefining the questions.

Look at this for example: The Supreme Court, in Saudi Arabia, has called on all Muslims throughout Saudi Arabia to sight the crescent of the month of Shawwal on Monday evening, Ramadan 29, 1440H, corresponding to June 3, 2019. This will signal the end of the holy fasting month of Ramadan and the start of Eid Al-Fitr, or Festival of Breaking the Fast.

The Supreme Court of Saudia Arabia:"Clarification on the Sighting of the Moon" Part2 pic.twitter.com/i0BSK1ZiYZ

In its announcement, the Supreme Court of Saudi Arabia called on whoever sights the crescent by naked eyes or through binoculars to report to the nearest court and register their testimony or report to the regional authority center in the area where the crescent was sighted to facilitate his reaching to the nearest court. This means, on the face of it, that Eid, depending upon moon sighting can be on 4th June or 5th June. But practically you can expect it to be on 4th June and in India and Pakistan, in all probability, it will be on 5th June – as Fawad Chaudhry’s scientific calendar in Pakistan predicts.

Why Muslim Eid Remains Uncertain? How do Muslims Determine?

Eid falls on the first day of the month of Shawwal. This month, and therefore also Eid, begins the day after the night where the young crescent becomes clearly visible (right after the astronomic new moon). Now, many questions, in frustration, how can it be that Eid al-Fitr gets celebrated on different days? Don’t we base ourselves off the same moon?

Well, the answer is: this has all to do with how it gets determined whether the Ramadan is over or not. There are 4 frequently used methods to do this: Naked Eye Moon Sighting, Following Holy Mecca, Scientific Calculation and Calculation of the observation.

Dr. Amtul Qadoos Farhat, Editor of the Muslim Times in Canada, had sometime ago, writing in his own publication, given a good explanation of these four methods. He defined these as options 1-4 as follow: (his words more or less, but not exact)

Option 1: Actual sighting of the new moon with naked eyes. Thus the confusion in countries like Pakistan where religious scholars remain glued to telescopes and TV channels keep.

Option 2: Following Makkah and celebrating Eid on the same day as Makkah (ie Saudi Arabia, so it will be 4th June 2019). Many parts of the world in Africa and Pakistan’s tribal areas and parts of KP will do that each year.

Option 3: Calculation of birth of the new moon, even though it may not be visible to naked eye, even in perfect conditions. Many Muslim groups in North America (United States and Canada) will use this Option Number 3 where they use the calculation of birth of new moon and do not care whether the moon is actually visible or not in a particular region.

This explains how western hemisphere, lying 10-11 hours behind India and Pakistan, ends up celebrating Eid one day before South Asia. Many in Pakistan and India, who we can consider orthodox, do not believe in calculation method and will wait till the last day, or the last moment, to try to see the moon with eyes.

Option 4: Calculation of actual sighting of the new moon in perfect conditions

Islamic calendar is a lunar calendar. Months span from a new moon to another. Canonically Islamic traditions hold it that, the sighting of a crescent moon marks the start of a new lunar month. A moon cycle takes approximately 29.53 days. So a month can either have 29 or 30 days.

Traditionally moon sightseers, as in India and Pakistan, to celebrate Eid, check for crescent moon sightings on the 29th night. If there is any sighting, they declare the start of the next month else it is implied that the current month has 30 days.

Moon sighting based on astronomical calculations does not count the beginning or the end of Islaamic months, rather it should be visible through eyesight:

2) like telescopes), rather it is sufficient to sight it with their eyes. But if a person seeks the moon with them (i.e., telescopes) and is certain that he has seen it by means of them after the sun has set, and he is a Muslim of good character…

3) then I do not know of any reason why his sighting of the moon should not be followed, because it is still a visual sighting and is NOT (based on) calculation."

Moonsighting admittedly is a tough job. The moon sets just minutes after the sun sets during its new moon phase. Besides this, the weather might also impede the sighting. This may explain the frustration and media debate in countries like Pakistan.

Coming to a #mosque near you!#LookingForEid #moonsighting

To celebrate Eid the moon sightseers in the Indian subcontinent might sight the moon a day later than the people in the Arabian Peninsula to celebrate Eid. The 2.5-hour difference doesn’t factor much into fraction of the visible part of moon. Logically it would infer that the month would start on the same day without any discrepancy. However Islamic society in general still prefers to follow the traditional method of sighting of the moon to decide the month. Two different cities in the same country, might start a month on two different days – this may explain the difference at time between Lahore and Peshawar.

Read more: Pakistan and Qatar expected to celebrate Eid on the same day

Is there One Christmas?

Most Muslims believe that there is just one Christmas and that it was always like that. In reality, this may not be that simple either. Funny as it may sound, “One Christmas” was a 1994 American made-for-television drama film starring Katharine Hepburn Henry Winkler and Swoosie Kurtz. It was based on the 1983 short story “One Christmas” by Truman Capote about a young boy who reluctantly leaves his Alabama home to spend Christmas with his estranged father in New Orleans. The film originally premiered on NBC on December 19, 1994. To the extent of the film, it may be right but Christian communities in different parts of the world and in different ages may have different conceptions of Christmas.

The early Christian communities, spread across Middle East, Rome and Africa, distinguished between the identification of the date of Jesus’ birth and the liturgical celebration of that event. This statement may also shock many Muslims in favor of one Eid, because today Christianity in their minds is identified with the west, ie North America and Europe; but Christianity in its origins is a religion of the East that spread across Palestine, Syria, Iraq, Iran, Egypt, Arabian peninsula and Africa before being adopted by Romans who then spread it across Europe along with the conquering Roman legions – but that is a different story.

The actual observance of the day of Jesus’ birth was long in coming. In particular, during the first two centuries of Christianity, there was strong opposition to recognizing birthdays of martyrs or, for that matter, of Jesus. Numerous Church Fathers offered sarcastic comments about the pagan custom of celebrating birthdays when, in fact, saints and martyrs should be honored on the days of their martyrdom—their true “birthdays,” from the church’s perspective. Because these saints were born with their martyrdoms.

Was Christmas always on December 25?

Date and nature of celebration of Christmas kept changing. To this day, the precise origin of assigning December 25 as the birth date of Jesus is unclear. The New Testament provides no clues in this regard. According to articles and entries in Wikipedia, and Encyclopedia Britannica December 25 was first identified as the date of Jesus’ birth by Sextus Julius Africanus in 221 and later became the universally accepted date.

One widespread explanation of the origin of this date is that December 25 was the Christianizing of the dies Solis invicti nati (“day of the birth of the unconquered sun”), a popular holiday in the Roman Empire that celebrated the winter solstice as a symbol of the resurgence of the sun, the casting away of winter and the heralding of the rebirth of spring and summer. Indeed, after December 25 had become widely accepted as the date of Jesus’ birth, Christian writers frequently made the connection between the rebirth of the sun and the birth of the Son.

Read more: Why is Christmas celebrated on December 25

One of the difficulties for us to accept this view is that it suggests a ready willingness on the part of the Christian church to appropriate a pagan festival when according to most historians the early church was so intent on distinguishing itself categorically from pagan beliefs and practices. But then you never know the kind of compromises that were struck by different communities at different stages of their evolution and much in history is invented by the later day historians.

December 25: An act of Intuition?

Christmas began to be widely celebrated with a specific liturgy in the 9th century but did not attain the liturgical importance of either Good Friday or Easter, the other two major Christian holidays. Roman Catholic churches celebrate the first Christmas mass at midnight, and Protestant churches have increasingly held Christmas candlelight services late on the evening of December 24. A special service of “lessons and carols” intertwines Christmas carols with Scripture readings narrating salvation history from the Fall in the Garden of Eden to the coming of Christ. The service, inaugurated by E.W. Benson and adopted at the University of Cambridge, has become widely popular.

Answers often redefine the questions or defeat them. Editors of GVS hope that readers found these explanations helpful and interesting. Though, many sources were consulted to write this but all mistakes belong to us – Editor, GVS

Previous articlePSO unable to find a CEO for itself?
Next articleNorth Korea’s “Executed” former spymaster resurfaces for an art performance

25 September 2021
Previous articlePSO unable to find a CEO for itself?
Next articleNorth Korea’s “Executed” former spymaster resurfaces for an art performance