Dr Kamal Monnoo attended an Indian webinar that revolved around the latest study prepared by CRRID outlining the loss of trade between Pakistan and India, and the need to restore trade through the corridor of Wagah-Attari as a priority. 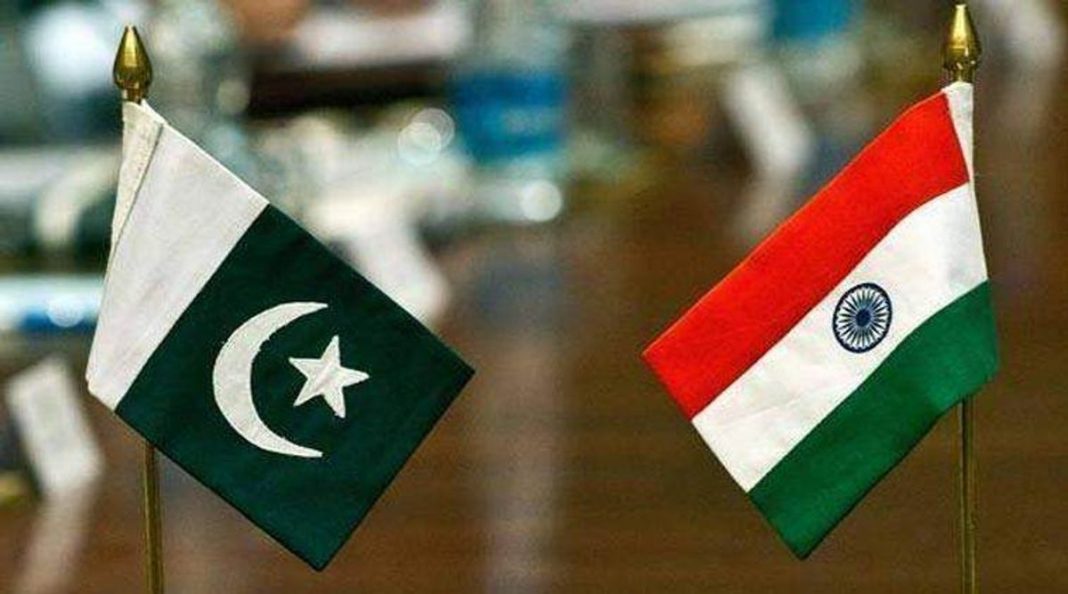 I was recently invited to a (webinar) conference organized by the CRRID (Centre for Rural Research and Industrial Development) management, India, to participate on the topic ‘Indo-Pak Trade Embargo: Impact on Punjab Economy.’ The discussion revolved around the latest study prepared by CRRID outlining the loss of trade between Pakistan and India, and the need to restore trade through the corridor of Wagah-Attari as a priority.

The paper argues that the stalling of trade between Pakistan and India since August 2019, is adversely affecting the local population on both sides of the border, as they have lost work and jobs, in the process escalating poverty.

It explains that the average annual trade between India and Pakistan during 2014-15 and 2018-19 was to the tune of IRS1605710 lakh. This trade came to a grinding halt after the imposition of 200 per cent custom duty by India on all imports from Pakistan with effect from 16 February 2019. It came to a complete halt on 9 August 2019 when Pakistan imposed a trade embargo on its trade with India.

Significantly, India has been enjoying high favorable balance of trade (IRS981680 lakh, average annual) during 2014-15 and 2018-19, which has been lost due to trade embargo. The average annual trade of India with Pakistan through Wagah-Attari land route (ICP Attari) during 2016-17 and 2017-18 was to the tune of Indian IRS406330 lakh. This comes out to be 25 per cent of their total mutual trade.

The share of imports varies from 47.4 per cent and 59.78 per cent. This shows the significance of Wagah-Attari land route trade in India’s total trade with Pakistan. Rail and road are the two modes of transporting the goods through this route. However, road is the predominant mode of trade.

Given 62,000 as an annual average round of trucks and IRS1500 net income from each round, the income loss to the truck owners comes out to be IRS930 lakh per annum.

My response from the Pakistani perspective reads as follows:

The paper, as shared, and the workings prepared by Prof Ghuman and Haqiqat Singh Sahib, are indeed very insightful and yes, one does agree that in principle there is every reason for one to be a strong proponent of trade in general and for promoting India-Pakistan trade in particular.

However, at the same time, one also needs to be a pragmatist in realizing that economic relations cannot function in a vacuum. Nations and countries are made of living people and unless trade respects each other’s rights, interests and more importantly, it positively touches the lives of the populace on both sides or of all trading partners, it cannot be sustainable.

Therefore, it is imperative to objectively analyze where the constraints (on Pakistan-India trade) lie and how best to address them or to at least correctly ascertain and highlight them with intellectual honesty.

When it comes to modern trade, what we need to understand anew is that its very nature stands changed over the last decade or so. Post 2008’s financial crisis countries have come to view both, bilateral and global trade very differently. Gone is the once blind romance with free and fair trade at any cost and the lofty notion of the World being a global village.

The age of protectionism is back

Today instead the focus has shifted to reviving home industry, spurring domestic demand, creating jobs at home, and using employment as an all important tool in achieving equitable growth and in eradicating poverty – In short, the age of Protectionism is back. Yesterday’s iconic institutions like the WTO, EPA, HRC, and such other bodies are today struggling to even maintain the underlying semblance of their (respective) core visions.

For the sake of time, I won’t go into details here, but the examples of countries where protectionism is taking root are aplenty: USA, European Union, China, India and now also some smaller economies seem to be following suit.

The yesteryears mantra of trade, trade & trade seems to have been unceremoniously dropped, ironically by the very former champions of free trade, that is the moment their economies got hit by the present wave of recession.

It is only equitable trade that is sustainable

Now in what is being termed as a fresh approach, it is being argued today by nearly all modern-day trade economists, Stiglitz, Atif Mian, Piketty, Krugman and others, that contrary to the previously held belief whereby all forms of trade were desirable, in reality it is only equitable trade that is sustainable and one that should be entered into.

Only trade can bring about (between trading countries) mutual prosperity, common development & growth, combined innovation, a complimentary incubator-effect, and of course in the process lead to the much talked about world peace, while on the other hand an imbalanced trade instead turns counterproductive leading to ill will, disputes, domestic pressure, trade wars and even possible military conflicts.

In essence, what this means is that in today’s changed global scenario, in order for trade to succeed it needs to take place as a complete economic package: Investment, Currency Swap Arrangements, Mutual financing, Surplus utilization for common benefit, Technology Transfer, Human Resource development and its free movement, and of course the accompanying trade in form of exchange of required goods.

A prime example of this could be the Chinese OBOR initiative in general and the CPEC initiative with Pakistan, in particular. In contrast, a cursory look at the Pak-India trade history and we see an equation heavily skewed in India’s favor, something that going forward will have to change.

If bilateral trade between these two countries has to be restored in a meaningful way then the old and perhaps obsolete terms of the past will have to way for fresh thinking and in ensuring a level playing field, because the region and the world in the meantime has moved on!

SAARC, which could have been a powerful forum to address some of the highlighted issues has unfortunately also been rendered ineffective, since unilateral Indian decisions like refusing to attend its Islamabad Summit (neither in letter nor in spirit) or by shooting down the Collective/Regional Bhutan Hydel Power Project’s Proposal under the joint auspices of SAARC, have simply not helped, and these to only name a few.

The reality is that like it or not, both India and Pakistan have rightist elements in their sides that opine that even if no trade between Pakistan and India takes place, then so what? After all (going by the study presented by CRRID) the numbers at stake, especially on trade from Wagah-Attari, are rather small, and cannot possibly have significant economic impact on both sides.

However, to counter this sort of thinking what one needs to look at is not today’s trade numbers or the economic impact there of, but more importantly, what the actual underlying potential of Pak-India trade truly holds.

Is India still a competitive or viable import swap option for Pakistan?

Also, from the Pakistani perspective, since India has historically always benefited from this trade, so in today’s context it is important to determine that is India still a competitive or viable import swap option for Pakistan?

On the first point, while there are a number of studies, both on the Pakistani and Indian sides placing the mutual trade potential from anywhere from $10 billion to $30 billion (in the last such exercise done by the FPCCI), a good yardstick would be to simply look at the current Pak-China trade figures, optimistically assume that as much as 50% can be shifted to India on price competitiveness, and then just half this number – naturally not all Chinese exports to Pakistan are replaceable and although even 50% – at this time – seems rather ambitious, still it could be a good starting point.

So, going by this exercise, it puts the potential to around $10 billion/annum, which by any stretch of imagination is quite sizeable and a good target to set. On the second point, it seems that this is precisely where the challenge lies when looking to meet any type of (future) targets set for the Pak-India trade.

India itself presently suffers with serious competitiveness issues vis-a-vis China and runs a fairly large trade deficit in its bilateral trade with China, thereby implying that at least in the short-term the areas or products where Pakistani imports could significantly be switched from China to India, are likely to be quite limited.

Agreed, that this sort of tangible bilateral cooperation between the two Punjabs looks difficult under the prevailing circumstances, but it would a productive exercise to try and genuinely determine on what perhaps should be the way forward in breaking the existing logjam? Regrettably, the answer to this may not be very simple, in fact on the contrary may instead tend to be quite tedious or complex, for two main reasons:

First, since a good part of the problem stems from gross mutual mistrust and given the dangerous Hindutva mindset now brewing in India and the unrelenting aggression of its current leadership, it is unlikely that this trust deficit will be resolved any time soon. And second, for successful trade and bilateral cooperation to come through what is required is an inclusive approach that not only encourages cooperation and supports trade per se, but also does so without prejudice.

Regrettably, this is where India invariably falls short, both at home and abroad. India’s record of ensuring free and fair trade even Intra-India remains far from being stellar. Indicators on prevailing unevenness in its wealth spread across its geography, a glaring disparity in its upward-mobility opportunities between its different ethnic and religious communities, disturbing concentration of wealth in a few hands and on-going gender bias, all tend to be barriers in ensuring a judicious domestic trade within India itself.

Overtime these anomalies manifest themselves in the very ethos of a trading culture, which gets rejected when it spills over on to the bilateral/international trading canvas. Essentially, implying that if the will on part of India is sincerely there to move forward in establishing sustainable economic relations with Pakistan and perhaps also within the South Asian region, then any type of hegemonic designs will need to be shunned to clearly demonstrate and give confidence to the smaller partners that a new India is at ease with developing a new kind of trade relations with its trading partners; a kind that tends to be a win-win for all stakeholders.

Finally, to conclude, one would once again like to reiterate that if India indeed wants an honest attempt at restoring the stalled trade relations with Pakistan, then some critical irritants will first need to be addressed, in mainly:

This time around adopting a holistic approach that goes beyond merely trading of goods and also accommodates cross investments; currency swap arrangements; opening of financial linkages; technology transfer; human resource development and its sharing; a visa regime made easy; and last but not least, a risk free and conducive environment for business to take place freely.

Setting up a joint Apex body with private sector representatives from both side, which to have the authority to monitor and ensure that business carries on regardless. & Restoring occupied Kashmir to its pre August 05, 2019, status.

One does realize that this commentary may not go very well with some of my Indian friends, but believe me if we have to genuinely live in peace and prosper together, then it is about

Am I The State?