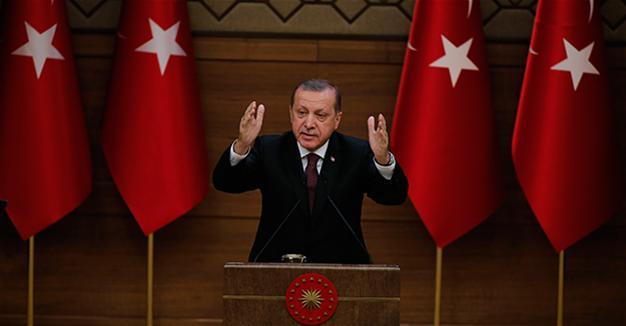 Turkey’s military operation in Syria is not against any country or person but terror groups in general, President Recep Tayyip Erdoğan has said, in contrast to earlier remarks that Turkey’s objective was to topple Syrian President Bashar al-Assad following.
“The aim of the Euphrates Shield Operation is no country or person but only terror organizations. No one should doubt this issue that we have uttered over and over, and no one should comment on it in another fashion or try to [misrepresent its meaning],” Erdoğan said at a 30th gathering with village chiefs at the Presidential Palace in Ankara on Dec. 1.  On Nov. 29, Erdoğan sought to explain the reason for Ankara’s military offensive into Syria, saying: “We entered there to end the rule of the tyrant al-Assad who terrorizes with state terror. [We didn’t enter] for any other reason.”
Erdoğan referred to the ongoing Euphrates Shield Operation that was launched on Aug. 24, after Ankara and Moscow began new dialogue over the course of developments in Syria. Turkey said its aim was to secure the border from the Islamic State of Iraq and the Levant (ISIL) and to stop People’s Protection Unit (YPG) efforts to link its cantons in northern Syria.

To access the complete article, please use this link: Hurriyet Daily

Was it really Baghdadi? Mystery continues as US buries IS leader at Sea

How similar are the US and the former British Empire?