The authors argue that Pakistan’s fragile democracy is bleeding between unelected institutions and over-ambitious individuals. They question the role of Pakistan’s top court in matters related to public policy, which, they argue, belong to the parliament and the executive. Read this piece to understand the debate. 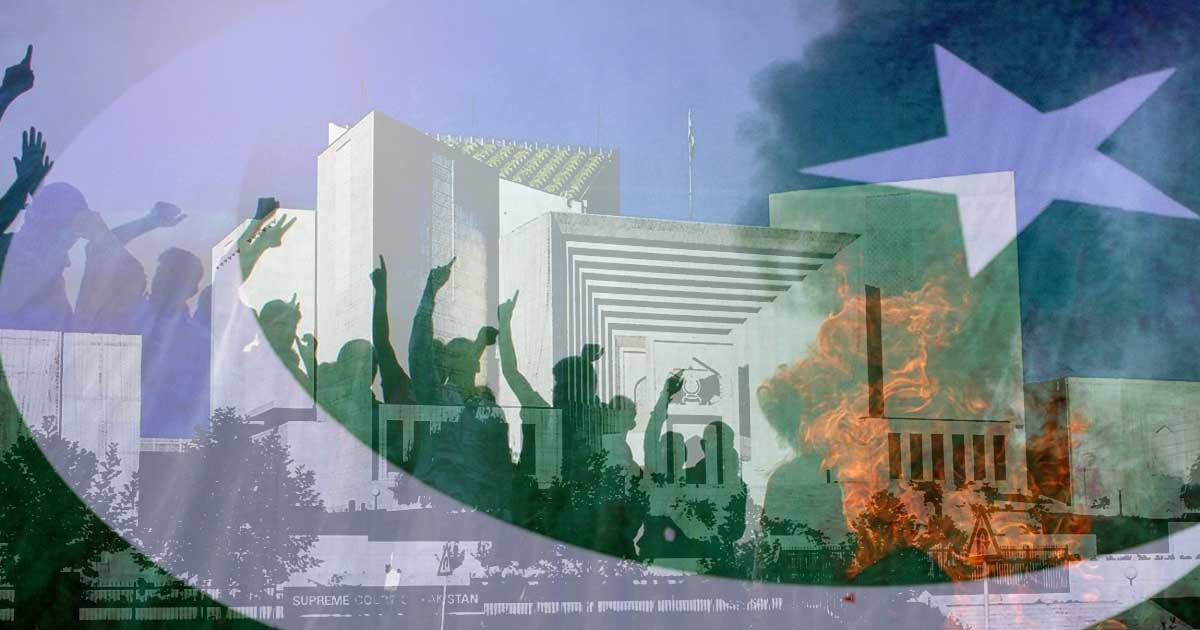 Pakistan’s Supreme Court has expressed concerns over the government’s policy to combat novel Coronavirus outbreak. Chief Justice Gulzar Ahmed questioned the state’s preparedness to deal with the crisis and observed that “there was no serious policy to manage the emerging crisis”.

Coronavirus outbreak has posed the biggest challenge to the governments, health systems, and medical experts across the globe. Globally, the death toll surged past 60,000, according to the data compiled by the Johns Hopkins University (JHU), amid over 1.1 million cases.

In Italy, the death toll rose to 15,362, while Spanish Prime Minister Pedro Sanchez announced that Madrid would extend the coronavirus lockdown until April 25, as the death toll soared to 11,744. Similarly, at least 8,100 people have died of coronavirus in the US, a developed democracy with an exceptional healthcare system.

Will the honorable court direct the prime minister about his advisers, ministers or special assistant? Can the court, from a legal and constitutional standpoint, do it?

As of today, Pakistan has confirmed 3, 864 positive cases of Coronavirus. According to official reports, at least 54 people died due to the virus. Experts believe that if the government tests more people, there will surely be more positive cases.

Now the question is what has Pakistani government done to prevent the spread of Coronavirus? As a matter of fact, Prime Minister Imran Khan was initially not in favor of ‘complete lockdown’. He offered several economic reasons behind his decision. However, provincial governments, experts and media urged the prime minister to ensure lose lockdown in order to ensure physical distancing so that the spread of the virus can be stopped.

Keeping into view Pakistan’s tattering economy, the premier’s position makes sense as increased economic depression might have led to total chaos in the country where not only health system but also security department would have collapsed.

Later on, the Prime Minister announced Corona Relief Tiger Force and Corona Relief Fund along with a multi-billion package involving relief for labour and underprivileged class, the business community and industries and farmers.

Interestingly, Kristalina Georgieva, Managing Director-International Monetary Fund (IMF), has praised the government for its “swift move to offer relief response to the people”.

The evidence suggests that Pakistan’s government has done as per its capacity (except the disputed position of Prime Minister Imran Khan on the question of complete or partial lockdown).  The top judge, we assume, has not watched the premier’s speeches where he outlined his government’s policy or the honorable judge has a better plan to combat the unstoppable epidemic.

However, the most controversial part of the Supreme Court’s observation is its question about the qualification of the premier’s Special Assistant. Will the honourable court direct the prime minister about his advisers, ministers or special assistant? Can the court, from a legal and constitutional standpoint, do it? Should the court review its own observation as it appears to be an attempt to meddle into the domain which clearly belongs to the premier, executive head?

Notably, Zafar Mirza is a medical doctor with post-graduation in Public Health in Developing Countries from the London School of Hygiene and Tropical Medicine and a clinical stint in mental health. He has served as the Director of Healthcare System Development at the WHO Regional Office for the Eastern Mediterranean. Dr Mirza is also a founder Executive Director of a civil society organization – The Network for Consumer Protection in Pakistan.

Globalization is posing a challenge to democracy?

We note with a heavy heart that democracy is in decline across the world. The rise of far-right movements, Islamophobia, religious extremism and populism have not only damaged the liberal institutions but also murdered the democratic spirit which was the hallmark of the western societies in the post-enlightenment era.

The authors, however, believe that one of the biggest challenge posed to democracy is due to the existing structural conditions as a result of increased globalization. The states have to interact and coordinate with international institutions like the IMF and the World Bank for economic well-being.

Unfortunately, they prompt a shift of power away from national parliaments. To deal with the need for regulation in highly technical fields, bureaucratic agencies staffed with area-experts begins to take on a quasi-legislative role. In order to fulfil the promises of complicated financial policies and economic growth, to develop rules, plans, and standards on issues ranging from trade to climate change, an array of international treaties and more it is likely for democratically elected governments to become dependent upon unelected institutions.

Such a system is likely to produce favorable results and thus sustain a desired public opinion necessary for the continuation of power but the cumulative result has been a creeping erosion of democracy: As more and more areas of public policy have shifted from the jurisdiction of democratic practices, the people’s ability to influence their government has been drastically curtailed.

Furthermore, within the state, the role of unelected institutions (generally headed by over-ambitious individuals) has increased to an unprecedented level. Theoretically speaking, the judiciary through its power of Judicial Review can overturn anything which may deem unconstitutional to a body of unelected men and women.

For example, a body of the 9 unelected individuals in the USA legalized homosexuality. This has undermined the role of the parliament which was traditionally created to represent the people’s will to formulate public policy. The increased intervention by the institution which is not directly accountable before the public in matters related to public interests have lessened the sheen of democracy across the world.

In the instant case, we note with great caution, the top judge recklessly passed comments over the matter which exclusively belongs to an elected government. If the courts start telling the elected governments what public policy needs to be adopted, the idea of intellectual aristocracy appears to be at work in the 21st century.

Pakistan’s fragile democracy demands extra protection in order to be consolidated in a firm way. Therefore, the incumbent government and the top court need to clarify the rules of the game: what belongs to the executive? What courts can and cannot do? And finally, who will watch the watchdog in emerging democracies like ours?

Farah Adeed is working as Assistant Editor with Global Village Space (GVS) and Syeda Aminah Gilani teaches Political Science at the Kinnaird College for Women, Lahore-Pakistan. The views expressed in this article are the authors’ own and do not necessarily reflect Global Village Space’s Editorial Policy.