Slums behind walls, a huge crowd gathered, Trump is looking at a huge welcome in India and PM Modi eyes the trade deals expected to be signed between India and the US, but the only trade deal India is getting is probably the US selling more helicopters. PS: India miserably failed to project Pakistan as a terrorist hub too. 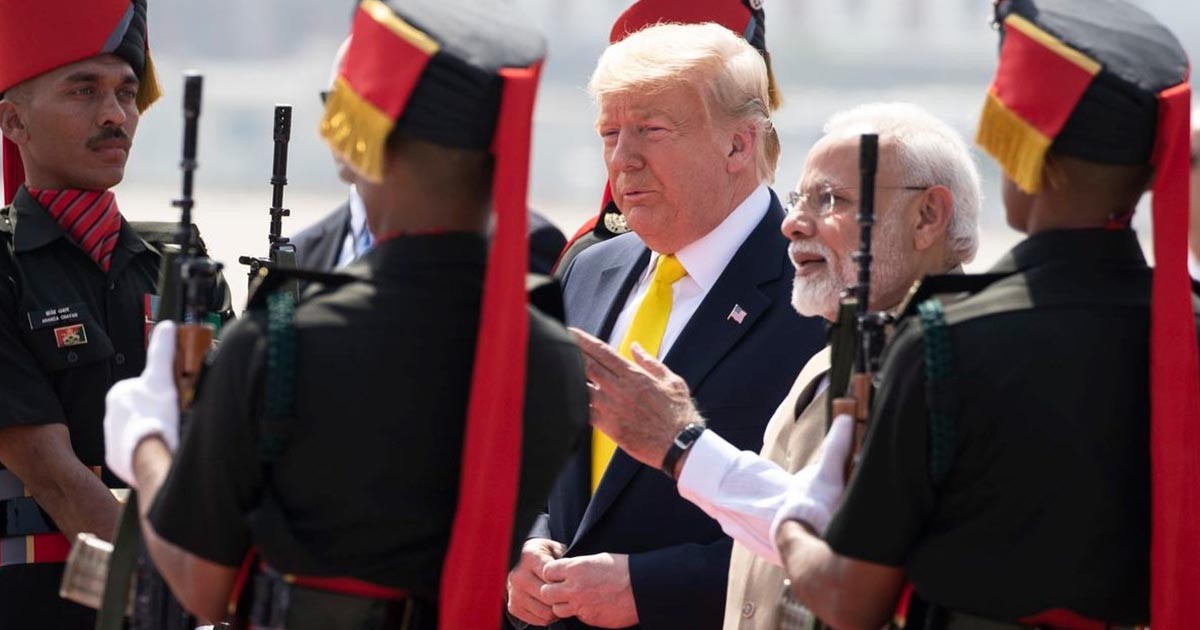 So far, Trump’s visit to India is a show of optics sprawling seriously amid trade and strategic skeptics. The Modi’s show of feats is a cost he is ready to pay to overshadow the internal questions on chaotic India’s secular nature and homegrown breakaways of unionist India. On the other hand, Trump is only interested in neutralizing home ground bearing to caste away the impeachment residue of national suspicion and in emboldening the US global reach out through the non-tangible Indo-Pacific strategy.

The trip is seemingly an arsenal sell out of US Helicopters with the disappointing the Indian aspirations of trade tariff scuffles and the revival of the GSP status suspended by the US. While Modi’s hysteria of schizophrenic hugs continues, Pakistan’s strategic significance stands beyond the heinous Indian reach.

The stage set at the Montera Stadium proceeded by the Gandhi Aashram and to be followed by the Taj Mahal exhibit the optical latent of the trump’s visit. There will not be any substantial headway towards the ambitious Indo-Pacific doctrine of India which will seriously raise questions on Modi’s diplomatic buoyancy in the region. The formal show of expressions at the Montera does not guarantee the seriousness of the American foreign policy echelons in giving the Indo-Pacific strategy any serious look.

Besides, the very idea of what is meant by Indo-Pacific is a mere abstraction to date though bandied around madly only to signal out the increasing Chinese influence in the Indo-Pacific region. The divergent interests of countries within the so-called Indo-Pacific layer are not yet crystallized and are of divisive nature and take ins.

The trade relations standoff continues with a stalemate as granting India the GSP status back. The American apprehension of trade with India is seen with suspicion in the Indian chambers as much as these are conceived with trade exploitations on the American side. The retard in the Indian economy calls for an immediate structural readjustment which Modi Sarkar does not seem to be planning any sooner.

The played out mantras of Islamist Radicalization as chanted out by Trump in Montera is an occasional cliché that has died its serious buying out. The mentions of crippling ISIS in Syria depict wildly the less done work on the Trump side as regards global strategic gains to inspire his re-election.

Indian hopes of branding out Pakistan as a sanctuary of terrorists have so far met a great disappointment as trump declares Pakistan an important strategic partner and has given out shut up call to the hallucinating Modi of typical Pakistani hatred. This gives Pakistan an opportunity to capacities upon broadening relations with the US especially in the Trump times lasting November 2020 which could give Pakistan significant gains in the diplomatic fronts. The role Pakistan has played in erecting the Afghan Taliban and US peacemaking agreement is phenomenal and it now depends entirely on the foreign office to capitalize it to the fullest possible contours.

“Our relationship with Pakistan is a very good one, thanks to these efforts we are beginning to see signs of big progress with Pakistan”, says Trump in Ahmedabad to shocked Modi supporters
Does Trump know Ahmedabad is in India, that he’s in India as well?pic.twitter.com/8CbBo4ueJ0

The Pak-American relations can bolster at unprecedented rates keeping in view the increasing importance of Pakistan in the geo strategics of south Asia. The international isolation which was celebrated by India now seems to be falling apart like a great faux.

India will keep on facing the threats from internal stratification which are not seen settling in the near future given the dubious CAA and the Kashmir issue attracting international attention. Pakistan has to gear up its foreign office which at times is seen dormant to capitalize the strengthen the Pak Us ties in the wake of the Afghan peacemaking.

Besides full scale propagandizing of the Kashmir issue must be seriously taken up on a missionary basis. While doing this, the Pakistan Look East Policy in relation to China needs to be further fast galvanized to check the Indian rise and influence in the region which is luckily presently halted by the homegrown tensions within India. Pakistan reaches out to the East Asian Nations also needs to be fully sensitized.

Trump-Modi’s current love affair is a show of optics than any material and tangible strategic gains rather fears loom of Modi having to attract some level of antagonism from the Democrats who will be watching the Modi regime from now with some suspicion.

Muhammad Jahangir Kakar is a civil servant and socio-political analyst based in Quetta works for the government of Balochistan. The views expressed in this article are the author’s own and do not necessarily reflect the editorial policy of Global Village Space.