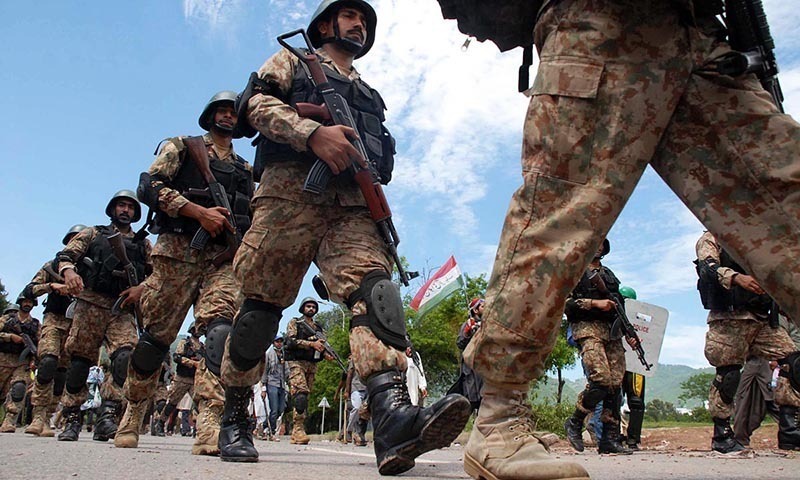 Radd-ul-Fasaad, a term borrowed from Muslim history — which means more or less, ‘elimination of discord’ — will now aim at indiscriminately eliminating the “residual/left over threat of terrorism”, consolidating the gains made in other military operations, like Zarb-e-Azb, and further ensuring the security of Pakistan’s borders, Army claimed. This had become necessary after the recent wave of terrorist attacks across Pakistan.

Read more: How terrorist sanctuaries in Afghanistan are posing threat to Pakistan’s viability?

The attack at the Sufi Shrine of Lal Shahbaz Qalandar in Sehwan Sharif killed almost 100 poor innocent disciples of the shrine; more than 200 are injured. Earlier Al-Ahrar claimed responsibility for a suicide attack in Lahore on chemists protesting outside the Punjab assembly.

Pakistan Air Force, Pakistan Navy, Civil Armed Forces (CAF) and other security and law enforcing agencies (LEAs) will actively participate in and ‘intimately support’ the armed forces’ efforts to eliminate the menace of terrorism from the country, the statement added.

“The effort entails conduct of Broad Spectrum Security / Counter-Terrorism (CT) operations by Rangers in Punjab, continuation of ongoing operations across the country, and focus on more effective border security management,” the ISPR said.

The Army’s announcement, of Raad ul Fasaad, followed a meeting in Lahore between Chief of Armed Staff Qamar Javed Bajwa, the corps commanders of Punjab, the director general of Pakistan Rangers Punjab, and the heads of intelligence agencies, though reportedly DG(ISI) was not present in this important meeting.

Another development of the day was that federal government had approved a request forwarded by the Government of Punjab for the deployment of around 2000 Rangers personnel in the province. These Rangers will be given policing powers to conduct intelligence-based operations against militants, wherever required.

The demand that a Karachi style operation, clean up, be authorized across Punjab, was a demand from opposition and media for quite some time. The argument was that all across Punjab, criminal elements and sectarian organizations are part of the constituency power politics, and that their presence provides cocoons for the terrorists to penetrate and act with impunity. However, will this Rangers permission by the Federal government will lead to the kind of operation public was expecting or is this a mere cosmetic measure to please public after the recent terrorist wave remains to be seen.

Certain other things also raise concern and add to the suspicion that more political posturing is at play rather than a serious well thought out plan against the terrorist organizations. The week began by Finance Minister Ishaq Dar informing Senate that the army had been empowered to act against terrorists across the border; if it has evidence. This was a very strange position, announced in a very casual fashion as if attacking inside Afghan territory has no implications.

Operation Radd-ul-Fasaad has been announced as a continuation of the National Action Plan (NAP), the ISPR said in its Wednesday notification.

Widely criticized for its apparently half-hearted implementation, NAP had been formulated after the devastating attack on Army Public School Peshawar in December 2014.

Operation Radd-ul-Fasaad was announced in the aftermath of a fresh resurgence in terror attacks in Pakistan.

On Feb 21, security forces killed three suicide attackers who attempted to wreak havoc at a local court in Khyber Pakhtunkhwa’s Charsadda district. The attack had killed five civilians and was claimed by the proscribed Jamaat-ul-Ahraar (JuA).

On Feb 16, the shrine of Sufi saint Lal Shahbaz Qalandar in Sehwan was struck by a suicide bomber affiliated with the militant Islamic State. The worst in the recent flurry of militant activity in Pakistan, it saw at least 88 killed and more than 300 injured after a suicide bomber t

argeted devotees during the evening dhamaal.
Earlier the same day, an explosive device had targeted an Army convoy in the Awaran area of Balochistan, killing three soldiers.

On Feb 15, a suicide bomber had struck in Mohmand, killing three personnel of the Khasadar force and five civilians. This attack was also claimed by the JuA.

The same day, a suicide bomber rammed his motorcycle into a vehicle carrying judges in Peshawar’s Hayatabad Phase 5 area, killing the driver and injuring its four other occupants. This attack was claimed by the TTP.

On Feb 13, a suicide bomber had struck a protest on Lahore’s Charing Cross interchange, killing 13 and injuring 85. The attack had happened right outside the gates of Punjab’s Provincial Assembly.

The attack was claimed by the JuA.

On the same day, two personnel of Balochistan’s bomb disposal squad were killed as they attempted to defuse an explosive device planted under the Sariab Road bridge in Quetta, the provincial capital.

History of Military Operations against terrorists; How will this be different?

Operation Raad-ul-Fasaad, will be the 11th such operation launched against the same cocktail of terrorist organizations, since 2007 – when Operation Rah-i-Haq-1, was launched, followed by Rah-i-Haq-2, in 2008, both in Swat Valley. While Pakistani people have a special bond with their armed forces and if there is any public institution left that enjoys the trust and respect of people then its Pakistan Army. However given the long list of operations launched against more or less the same set of terrorists, public and media quietly wonder: How will Raad-ul-Fasaad any different?

Operation Zarb-e-Azb, though represented a continuation of earlier operations, started in Musharraf and Gen. Kayani era, but was presented by ISPR and sympathetic media as the final end of all struggle and a kind of victory against terrorism. Nawaz government also never stopped taking credit for its success. The fresh attack of terrorism thus definitely raise all kinds of questions.

US evacuates ISIS militants from Syria and Iraq to Afghanistan