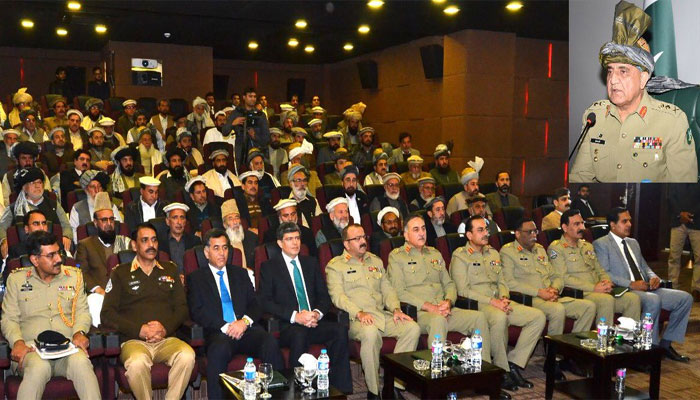 Chief of Army Staff General (COAS) Qamar Javed Bajwa on Wednesday threw his weight behind the merger of Federally Administered Tribal Areas (Fata) with the rest of the country. In conversation with the delegates on the FATA merger, he assured them of full Pakistan Army support in mainstreaming the much-talked-about region according to the wishes and aspirations of the tribal people.

The delegation of the tribal leaders including the elders and young Jirga members visited the ISPR office to meet the Army chief. Army chief met both concerned parties separately.

While addressing the tribal leaders the Army chief expressed pleasure and appreciated the determination and resolute of the tribal people in supporting the Army against the militant insurgency and terrorism in the region. General Bajwa also lauded the valued views of the tribal delegations regarding the future of FATA.

The COAS advised the youth to continue playing the positive role towards the property of the region, especially as they can be future leaders.

The tribal leaders met the Army chief to push for the FATA reforms, amid government’s negative antic on FATA bill.

The government’s decision to withdraw the FATA reform bill (which was to be discussed on the house) on December 11th brought the expected backlash from the opposition benches. The legislators from opposition parties protested angrily at the government decision and tore the copies of the agenda and labeled it as a drone attack on the tribal people and a blatant injustice to the militancy-hit people of the tribal areas.

The incumbent government of Pakistan Muslim League Nawaz (PML-N) has been a close ally of the Pashtunkhwa Milli Awami Party (PKMAP) leader and nationalist Mehmood Khan Achakzai, who accompanied Nawaz in various post ouster rallies. In the recent past, he has been a frequent speaker at the former’s public gatherings. FATA’s merger can potentially bring prosperity and economic development to the impoverished and neglected region. The ruling Pakistan Tehrek-e-Insaf has been relentlessly supporting the alliance along with its coalition partner Jamaat-e-Islami (JI) in Khyber Pakhtunkhwa (KP).

Contrary to the beliefs of these ruling parties that seem sure to gain a political benefit of this merger, Achakzai’s party and other much smaller parties are destined to lose their footings in the region which they have controlled politically for a long time.

Read more: What kind of politics is being played to stop FATA being…

The merger threatens their power consolidated for a long time. Achakzai’s dilution of power in the region means an implicit decline in influence of PML-N. Why would the PML-N in such dire circumstances abandon its potent ally? Achakzai, and Nawaz apparently believe that it is the establishment which has been instrumental in the downfall of senior Sharif and now the Army is demonstrating unwavering support for the tribal merger that puts the government and establishment again at the forefront of this battle for the ascendance of power in the country.

The rulers of this country have taken steps in the direction, which is suited best to their crony allies. No one cares if the tribesman is deprived of the fundamental rights as long as the friends and associates of the super-rich crones are served well. People of Pakistan and their representatives must ask the government, why the militancy-hit and economically damaged people of the tribal areas are denied their rights to protect the interests of small parties with no or meager presence in provincial and national assemblies? Why sabotage the system that favors the majority to serve few individuals?

A brief history of the iconic Roosevelt Hotel