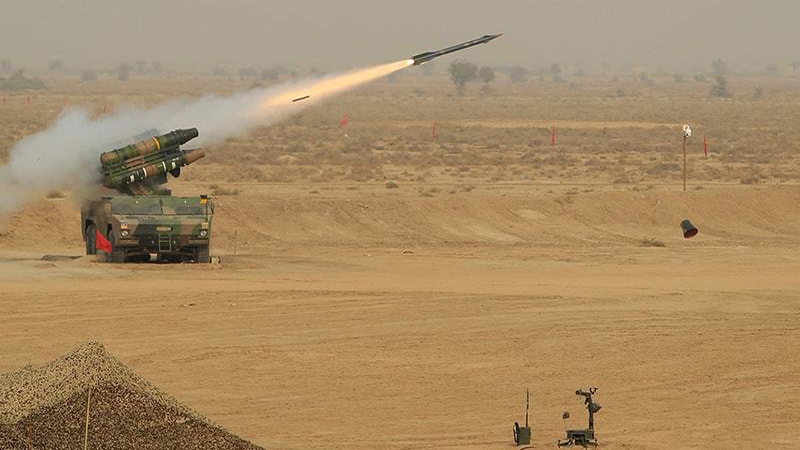 Pakistan Army has successfully inducted A-100 Multiple Launch Rocket System into its arsenal, boasting the strength of the Artillery Crop. The missile system has been indigenously developed by Pakistani engineers and scientists. Chief of Army Staff Gen. Qamar Javed Bajwa himself presided over the ceremony of induction and congratulated the team which oversaw the entire research and development of the project.

“With a range of over 100 kilometers, the rocket is a highly effective and potent interdiction that can effectively disrupt [the] enemy’s mobilization and assembly,” Inter-Service Public Relations (ISPR) issued the post-ceremony statement.

It is the juncture where hybrid warfare comes in handy, a combination of Cyber invasion, narrative shaping, proxy deployment, and social media to soften a country’s defense lines.

In parallel, both Pakistan and China are engaged in talks to induct one of the latest anti-ship missile technologies which China has to offer. The CM-401 flies at a speed of almost 5000 KMs per hour or over 4 times the speed of sound at a height of 25-100 kilometer’s and in its terminal phase accelerates to almost 6 times the speed of sound as it approaches the target and is most effective against ships of the size of frigates and above up to a range of 290 KMs.

Hue and cry against the purported deal are already being heard from across the border. Pakistan in recent years has been trying to modernize its forces as per demands of the contemporary security threats. Induction of CM-401 system into Pakistan Navy’s weapon cache will give it the utmost superiority over the waters in the Arabian Sea.

President of Pakistan Dr. Arif Alvi recently revealed the first ever maritime doctrine of Pakistan, defining the contours of water security in the wake of growing threats via the Arabian Sea. “It is time that we must develop credible solutions to the issues we face in the development of the maritime sector,” said President Alvi while speaking at the second Maritime Security Workshop (MARSEW-18) under the banner ‘Blue Economy–Prosperous Pakistan’ which culminated at the Pakistan Navy War College, Lahore.

An official doctrine was the need of the hour, particularly when not only the security but economy of the country is going to be dependent over the blue economy once the Gwadar port becomes completely operational.

So far Pakistan has been doing great overall three domains, Air, Sea, and land, in terms of meeting the needs of deterrence against the conventional and unorthodox threats. But the real and most significant threat in the current times is the asymmetrical or hybrid warfare. Pakistan due to economic and analytical constraints and partly because of its geostrategic positioning is the most vulnerable country to hybrid threats.

The Internet gives the access and vulnerability to most sophisticated of equipment for the enemy, therefore all of the power could be made obsolete in a matter of minutes.

In the current world, where economies are integrated to an unprecedented extent, conventional direct confrontation between two states would result in the economic loss which would take a decade for the repatriation. It is the juncture where hybrid warfare comes in handy, a combination of Cyber invasion, narrative shaping, proxy deployment, and social media to soften a country’s defense lines. It is generally preemptive before the major blow which comes afterward.

Due to the lawless Afghan terrain, Pakistan has been a crucial victim of asymmetrical warfare. With all the means of conventional deterrence intact, the country was not able to cope with the evolving nature of the threat in time. The realization came much later and even today the potential of this mode of warfare is not entirely understood among the power structures of the country.

For instance, cyber armies and the internet as a medium of offensive are the future while country lags behind a great deal to match the superiority of the world. The Internet gives the access and vulnerability to most sophisticated of equipment for the enemy, therefore all of the power could be made obsolete in a matter of minutes. Therefore it is high time that equal focus must be given to hybrid means of defense for the 360-protection of the country against any form of threats.

Previous articleHow To Build a Pandemic-Proof Online Presence for 2021 And Beyond
Next articleHoneymoon period is over, Mr. Prime Minster!

19 September 2021
Previous articleHow To Build a Pandemic-Proof Online Presence for 2021 And Beyond
Next articleHoneymoon period is over, Mr. Prime Minster!

Implications of PM Khan’s Saudi visit: Beyond the $6 billion support

India will use ‘armed drones’ in Jammu and Kashmir: Army Chief