Pakistan asks for release of prisoners from India 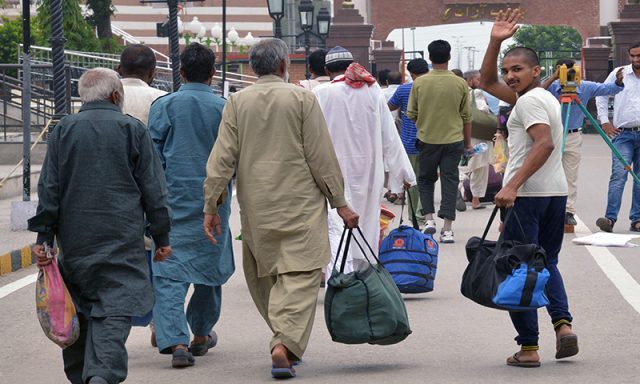 Pakistan said today it expected India to reciprocate its “friendly gestures” and release 54 Pakistani prisoners held in several Indian jails despite the completion of their prison terms. Foreign Office spokesman Mohammad Faisal told reporters here that Pakistan also wanted India to respond to its proposal about the exchange of prisoners. “Pakistan is pursuing the matter of release of 54 Pakistani prisoners from Indian jails, who remain incarcerated despite completing their sentence.

“We also await New Delhi’s response to Pakistan’s humanitarian proposal for exchange of prisoners above 60 years and children below the age of 18, shared with the Indian side on March 7 2018,” he said. Faisal said Pakistan made positive gestures on the humanitarian track vis-a-vis India as reflected in the release of civilian prisoners and fishermen. Faisal claimed Pakistan facilitated visits of India pilgrims to religious shrines despite New Delhi’s denial of visas for Pakistanis and also showed “good-faith humanitarian gesture of allowing Commander Kulbhushan Jadhav’s family to visit him”.

“We expect our friendly gestures to be reciprocated,” he said

Pakistani prisoners often serving in Indian prisons are subject to abject conditions. According to Human rights groups, Released Pakistanis often show ill health due to imprisonment conditions. Some of them are in such a bad mental state that they were talking incoherently. Those who are capable of talking speak of the harsh conditions inside Indian jails.

They often state that they were often given dirty water to drink and that the food served to them was often inedible. Some complained of being violently treated by the Indians. Many of the prisoners complained of not having access to proper medical facilities – some even complained that they were suffering from tuberculosis.

A famous case was Rana Sanaullah Haq, also known as Sanaullah Ranjay, was a Pakistani prisoner from Sialkot, Punjab who was serving a life term in a jail in India. He was arrested in 1990 after he accidentally crossed the border. He was convicted under Terrorism & Disruptive Activities Act for militancy and waging war against India and was sentenced to life in prison in 2009, by the Indian courts.

On 3 May 2013, he was attacked by a former Indian soldier Vinod Kumar, who had been convicted for murder. Reports of his attack came a day after the murder of an Indian prisoner Sarabjit Singh in Pakistani detention. Sanaullah died six days later due to the injuries sustained during the attack.

His death resulted in widespread condemnation by Pakistani government and Kashmiri leaders. In the aftermath, the Ministry of Foreign Affairs of Pakistan issued an advisory against travelling to India, citing security concerns for Pakistani citizens. Sanaullah’s death was also cited as a reason for the Indian Deputy High Commissioner to call off the visit of Pakistani visitors to Ajmer Sharif. The incident also prompted a demand for repatriation of Pakistani prisoners in India who have served their sentences. Many people in Pakistan and Pakistan-administered Kashmir have protested against the brutal murder, which has increased the rift between the two countries.

Quite contrary to the well-treatment of Indian spies in Pakistani jails, Indian secret agency RAW and other security agencies employ various techniques of torture on the so-called Pakistan’s suspected persons. Some Pakistani citizens and prisoners have also been killed in Indian jails, while a majority of them have been killed by Indian security agencies in fake encounters, particularly those persons, arrested in the Indian Occupied Kashmir.

Surjeet Singh openly admitted that he was in Pakistan to spy when he was arrested in 1982. In this respect, Surjeet Singh said, “I was a RAW (Research and Analysis Wing) agent. No one bothered about me after I got arrested.” Surjeet told reporters soon after stepping on Indian soil.

However, both Surjeet Singh and Sarabjit Singh were responsible for the string of blasts in Faisalabad, Lahore, and Multan in 1990 in which several innocent people were killed. They were also behind other terror-activities in Pakistan.

Bypolls: Road to a healthier democracy

Why is Congress compelled to woo Indian-Americans (NRI)?