Pakistan can benefit from multipolar world, if domestic challenges addressed 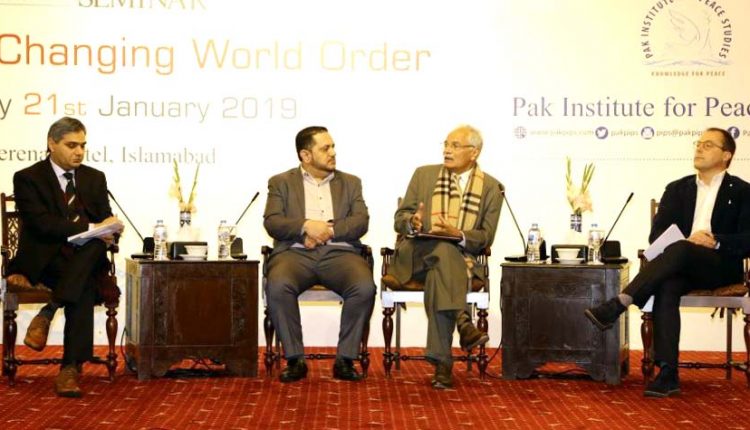 Even though Pakistan can seek some room for itself in the emerging multipolar world order, challenges persist at the domestic front, in the shape of extremist ideologies, unemployed youth, and economic stagnancy. Without taking those challenges, its options to affect any regional or global change will be constrained.

These thoughts came in a seminar on “Pakistan in Changing World Order”, organized by Pak Institute for Peace Studies (PIPS), an Islamabad-based think tank, which was well attended by diplomats, journalists, experts, and students.

PIPS director Muhammad Amir Rana said the world today is in flux. While it cannot be said for certain that “US’s predominance is fading”, he said, what is clear is that its “global posture is changing.” Former foreign minister Inam ul Haq said the US, under President Trump, has abandoned the idea of “multilateralism.”

Marco Mazerra, an expert of conflict resolution from Norway-based NOREF, hinted that multipolar world can also make conflicts more complex, as there are constant pressures and fears of proxies being supported by rival states.

Parallel to this has been the China’s rise. A topic of repeated speculation is how its relations will transpire with the US or the world in general. Amir Rana said scenarios range from conflict to competition to cooperation. Speakers noted China-US relations will impact Pakistan.

Some thought of India’s increasing closeness to the US is meant to counter China, but not all readily endorsed this linear assumption. US-based Woodrow Wilson Centre’s Michael Kugelman reminded of the deep trade relations between China and India. Similarly, he said, even though India and US are tied with strategic partnership, there is a disconnect between the two on the expectation side.

Read more: Is US still the only superpower in world?

Speakers noted Pakistan can benefit from emerging multi-polarity in the world order, given its good terms with China, Turkey, Saudi Arabia, and even Russia. But others called for looking inwards, taking steps that provide Pakistan with significance at the global stage. In any case, Inam ul Haq noted, Pakistan’s capacity and role in determining the changing world order are going to be extremely limited. “We would be accepting the changes rather than designing the changes”, he said.

Dr. Rifaat Hussain, professor of International Relations, said that while diplomatically Pakistan can have room to move through in the multipolar world, what can be problematic is the country’s economic condition. Similarly, Haitham Naser, an Arab expert, said for Pakistan, a concern could be the export of extremist ideology, such as of Daish.

Haitham agreed that Pakistan is in a tough position with regards to balancing between Saudi Arabia and Iran. The two countries are moving in opposite directions; mediating between them is very difficult, therefore. Marco Mazerra, an expert of conflict resolution from Norway-based NOREF, hinted that multipolar world can also make conflicts more complex, as there are constant pressures and fears of proxies being supported by rival states.

Inam ul Haq recommended that Pakistan should maintain a close relationship with all major powers including the US. He also called for enhancing Pakistan’s role in the UN, particularly in the peacekeeping missions. He also called for resolving Afghan conflict. The conference also noted that regional connectivity should be promoted.