Year 2020 became a year of challenges. Beside pandemic, South Asia is facing locust attacks threatening food security. However, Pakistan has initiated a fight against locusts. Farmers can contact National Locust Control Center number for guidance at 03205800120. 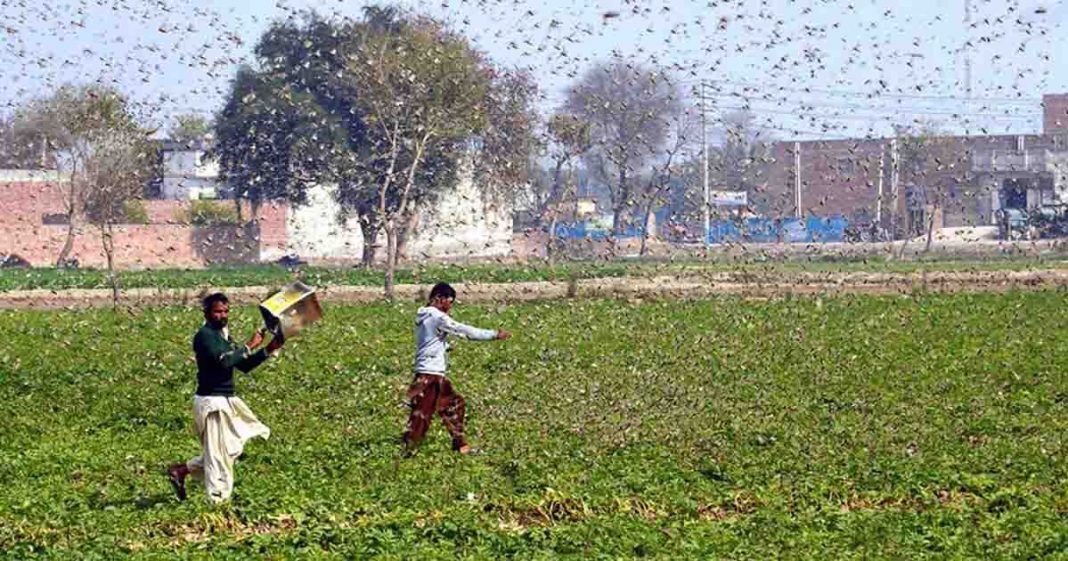 According to details released by the National Locust Control Center (NLCC) on Tuesday, joint teams of the Ministry of Food Security, Provincial Departments of Agriculture and Pakistan Army are conducting a comprehensive survey and control operation against locusts in different districts of the country. More than 1,142 joint military teams are taking part in the operation.

So far 238399 square kilometers (approximately 24 million hectares) have been surveyed, while control operations have been carried out in an area of 5389 square kilometers (approximately 538934 hectares). In the last 24 hours, 96547 hectare area was surveyed in Punjab province and locust infestation was confirmed in 2 districts (Mianwali and DG Khan) and anti-locust operation was carried out in 63 hectare area. More than 2191 people and more than 217 vehicles took part in the operation.

So we sent upon them the flood, the locusts, Lice and Frogs and blood as distinct signs, but they were arrogant and were a criminal people.
[Surah-Al A'araf : 7:133] pic.twitter.com/sO7jqx7O2y— 𝓜𝓮𝓱𝔀𝓲𝓼𝓱 𝓜𝓲𝓻𝔃𝓪✨ (@EngineerLarki) June 3, 2020

The operation involved 35 teams of 387 people (including Pakistan Army) and more than 64 vehicles. So far 3126604 hectares area has been surveyed and 38672 hectare area has been operated across the province.

“About 400-500 tonnes of insecticides were used to eliminate locusts”
“Boomer sprayers, tractor-mounted high-velocity sprayers and a fire department vehicle were used to control the locusts."

An anti-locust operation was performed. More than 80 teams of more than 912 people (including Pakistan Army) and more than 115 vehicles took part in the operation.

More than 1205 people and more than 105 vehicles took part in the operation. So far 9055719 hectare area has been surveyed and 285121 hectare area has been operated in the province. In addition to aerial spraying with the help of airplanes and helicopters, non-conventional methods are also being used for effective control of locust during control operations. Farmers can contact National Locust Control Center numbers for locust presence and for more information and guidance. PTCL 051-9274980-2 UAN 051-111222999 Mobile 03205800120-4.

How Imran Khan can turn challenges into opportunities?

Nawaz will return only when he is medically fit, Ahsan Iqbal