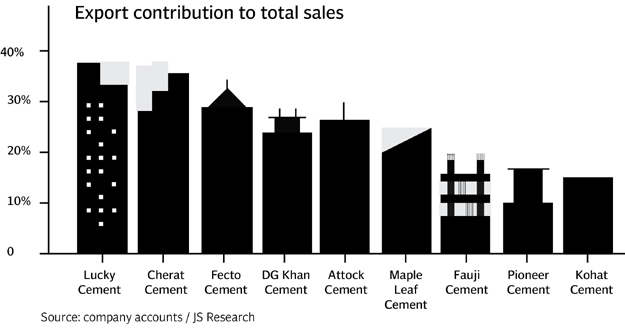 Pakistan cement industry’s FY19 started positively in terms of exports with rises in the first month of July 2018. According to the Federal Bureau of Statistics, Pakistan’s cement industry earned foreign exchange revenue of US$20.96m by exporting 475,134t of cement last month compared to US$16.31m on 369,506t of cement. This represented growth of 28.56 percent and 28.59 percent in terms of value and quantity respectively on a MoM basis.

Read more: Pakistan Cement sales up by 5% in July as Bestway Cement…

Fauji Cement Company Ltd (FCCL) announced its financial results for the year ended 30 June 2018 on 27 August. Its net profits were up by 31 percent YoY to PKR3.429bn (US$27.8m). This was possible due to a positive tax reversal in 4Q18 and rehabilitation of cement line II. FCCL recorded 10 percent YoY growth in local and export dispatches, partly due to the resumption of normal operations post rehabilitation.

FCCL net sales increased to PKR21.16bn from PKR20.42bn during this period. The company incurred a higher distribution cost of PKR275m against PKR166m in the same period last year.  The administrative expenses stood at PKR385m compared to PKR339m in 4Q17.

Meanwhile, FCCL has undertaken a massive tree plantation project around its 3.43Mta cement plant in the last 12 months. Approximately, 10,000 fruit and other trees were planted. While almost the same number of trees were distributed to adjacent villages. This effort has made the environment around the plant both green and clean.

FCCL, headquartered in Rawalpindi, operates a cement plant at Jhang Bahtar, Tehsil Fateh Jang, District Attock in the province of Punjab. It operates two lines, one each from FLSmidth and ThyssenKrupp industrial solutions.

Net sales grew substantially by 49 percent YoY to PKR14.39bn largely driven by full-year operations of production line II, inaugurated in January 2017. This was despite the industry’s failure to pass over enhanced FED, up by 25 percent YoY during the year due to intense competition therein, an analyst observed.

The effective tax rate of the company for the year stood at 0.7 percent as against 22 percent reported in FY17. This is largely driven by a five-year tax holiday available on sales made from production line II and likely positive deferred tax implications, resulting from reduced corporate tax rates as prescribed by the Finance Act 2018-19.

The company incurred a distribution cost of PKR337m against PKR279m incurred in the same period last year. The administrative expenses increased to PKR245m from PKR225m.

Eid-ul-Fitr celebrations across the globe!