Islamabad, 1st March 2018: Federal Minister for Foreign Affairs Khawaja Muhammad Asif, speaking at the Launch Ceremony of The Economic Benefits of the Modern Silk Road: CPEC, said that as the flagship project of the Belt and Road Initiative, CPEC is one of the most significant and transformative projects in modern history. He said that the initiative was a harbinger of shared dreams, common prosperity and win-win cooperation between two old friends, Pakistan and China. He also thanked Mushahid Hussain Sayed, Chairman Pakistan-China Institute for the efforts of his institute in enhancing the existing literature on the China-Pakistan Economic Corridor.

The function was organized by the Pakistan-China Institute, a local think tank devoted to bilateral relations between China-Pakistan and Association for Certified Chartered Accountants, Pakistan.

H.E. Yao Jing Ambassador of the People’s Republic of China was also present at the event. In his keynote speech, the ambassador termed CPEC as a successful cooperation between the two countries and highlighted the importance of such research initiatives, which are helpful for further enhancing the capabilities of both governments. While talking about the SEZs, he mentioned that local manufacturers will be encouraged to produce goods which can be exported to China as well as other countries. 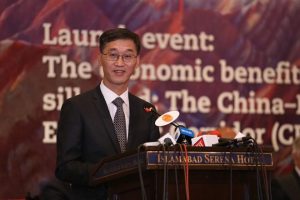 Speaking on the occasion, Chairman Pakistan-China Institute, Mushahid Hussain Sayed, highlighted the importance of the report saying that CPEC, the flagship project of the Belt and Road Initiative, is now moving forward very successfully. He said that CPEC’s benefits are going to be evident to the people of Pakistan in the years ahead. He also mentioned the 7th JCC where it was agreed that the content and vision of CPEC would be expanded and three more pillars, Agriculture, Poverty alleviation, and People to People exchanges would be added to the existing four pillars, which are Energy, Infrastructure, Transport and Railway and Gwadar Port.

He further said that CPEC is the way forward for building a prosperous and a progressive Pakistan. Chairman PCI quoted Quaid-e-Azam saying, “Pakistan will be the pivot of the world placed on the frontier around which the future geopolitics of the world will revolve.”

Arif Masud Mirza, head of MENASA, in his opening remarks mentioned that the event could not be more timely. He further said that CPEC is not only gaining momentum in Pakistan but also in the region as Belt and Road aim to rebuild the ancient Silk Route. He was of the view that the success of this major project was largely dependent on the mutual collaborative efforts of the public and private sector. The writers of the report, Malik Mirza, FCCA and Ahmed Lodhi, representative of the Pakistan-China Institute, gave an overview of the report and its findings. They elaborated on the overall economic impact expected of CPEC, the skills needed by finance professionals to benefit from CPEC in the years ahead and the perception of CPEC among finance professionals. 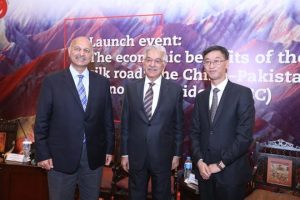 Dr. Ishrat Hussain said that we should not be short-sighted by just focusing on CPEC, but should also look at the larger model of development, which is unprecedented in human history. Mr. Shamsuddin A. Shaikh said that studies carried out by the Chinese reveal that Thar could provide Pakistan with energy for the next several centuries. Ms. Ambreen Shah said that on their own site in Hub, there are 2900 Pakistani employees and 1280 Chinese employees.

All countries except Turkey voted to place Pakistan on the FATF blacklist. Pakistan is scheduled to be placed on the grey list in June this year.

The function was largely attended by members of the public and private sector. There was representation from intellectual circles as well as the journalist community.

CPEC is considered to be a game changer of Pakistan as the country is becoming increasingly isolated in the international arena. The most recent example of this international insulation was seen in the Financial Action Task Force (FATF) meeting in Paris last year. All countries except Turkey voted to place Pakistan on the FATF blacklist. Pakistan is scheduled to be placed on the grey list in June this year.

The FATF meeting was not the beginning; the cut down of foreign aid began at the start of this year when US president Donald Trump posted a tweet accusing Pakistan of ‘lies and deceit’. The tweet was followed by the suspension of all military aid to Pakistan by the US. The country is also being accused of sponsoring terrorist attacks in Afghanistan and India. In the current situation, China is the only lifeline for Pakistan.

CPEC has been the biggest foreign investment in Pakistan in decades. It has the potential to revolutionize the whole country. China is not only investing in infrastructure, they have also allocated almost 1 billion dollars for investing in Sustainable Development Goals (SDPs) in Pakistan as iterated by the Chinese Ambassador in the ceremony. The funds will go towards poverty alleviation, agriculture and cultural dissemination.

The importance of CPEC lies not only in its economic value but also its strategic value. Pakistan is surrounded by enemies on both its eastern and western border. On one end, India has drastically increased its cross-border violations, on the other end; militants from Afghanistan are disrupting peace in Pakistan. In this situation, it is imperative for Pakistan to seek the assistance of a greater power and there is no better option for Pakistan than China because of their shared borders.

The project has been criticized in anticipation that China will interfere with the domestic issues of Pakistan and that Pakistan will become a subordinate to China. It has also been criticized for discouraging local industries and importing materials and labor from China but it cannot be further from reality. The implementation of CPEC has given a boost to the local industries and many have expanded. They have also produced a great number of jobs for the local populace and the sharing of technology will also boost our IT industry.

Textile sector’s gas suspension to cause $1B loss: APTMA

Inflation reaches a record high of 21.3 percent over 13 years

Is China taking over the export industries of Pakistan?

Why Pakistan could not escape FATF?

How pollution is destroying Quetta city?

Ishaq Dar’s health is better now, returning to save economy