Several speculations were rife after Saudi jet made an emergency turn to New York carrying PM Khan and his delegation to Islamabad. Yet another controversy took a toll that Saudi CP Muhammad Bin Salman called back his plane unhappy with Pakistan's energetic diplomatic engagements at UNGA. 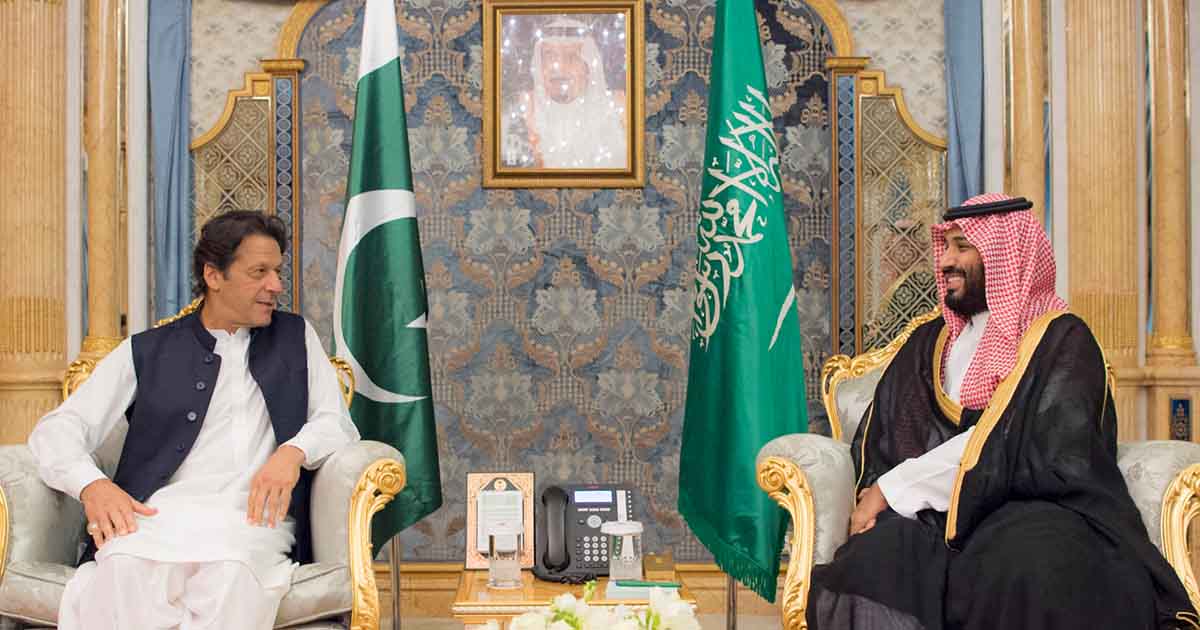 The government of Pakistan has brushed off claims of a Pakistani magazine that Saudi Crown Prince Muhammad bin Salman called back his plane following Prime Minister Imran Khan’s speech at the 74th UNGA session.

The magazine had claimed that Saudi Arabia’s Crown Prince was alienated with some dimensions of Pakistan’s Prime Minister Imran Khan’s actions on the sidelines of the UNGA session in New York last month that he ordered his, private jet to “disembowel the Pakistani delegation” as a consequence.

Before arriving in the US, PM Khan was on a two-day visit to Saudi Arabia. He arrived in the USA in the special aircraft of Crown Prince Muhammad Salman. According to sources, the Crown Prince stopped PM Khan from boarding a commercial flight for the US. “You are our special guest and you would be going to the US on my special aircraft,” Crown Prince MBS was quoted as having said to PM Khan.

Bhai, Khan still flew back on a Saudi plane, commercial one. Saudis want Imran to mediate with Iran on their behalf!

But upon his return to Islamabad from New York on September 28th, the Saudi plane developed a technical fault soon after take-off. Following which, Prime Minister Imran Khan and his delegation returned to New York and then boarded a commercial flight to Pakistan.

The return of PM Khan to New York fanned several speculations, with some even claiming that the flight had been purposefully delayed to prevent harm to PM Khan upon his return.

A magazine named Friday Times negated the reports of a glitch of a technical fault in the jet in an editorial published on October 4th.

“The Saudi Crown Prince, Mohammad bin Salman, was so alienated by some dimensions of the Pakistani Prime Minister’s diplomacy in New York – he couldn’t have been happy at the prospect of Imran Khan, (Turkish President) Recep Tayyip Erdogan and (Malaysian Prime Minister) Mahathir Mohammad planning to jointly represent the Islamic bloc, nor with Pakistan’s interlocution with Iran without his explicit approval…

“…He visibly snubbed Imran by ordering his private jet to disembowel the Pakistani delegation…,” claimed the article.

A representative of Pakistan’s government turned down claims of a conspiracy hatched by Saudi Crown Prince MBS against PM Khan, asserting that “this is a cooked up story.”

“The leaders of Pakistan and Saudi Arabia have good relations. The conclusion of Khan’s meeting with the Turkish and Malay leaders is pure fiction. The report is aimed at political vendetta. We dismiss this report,” the spokesman said.

The spokesperson added that the magazine had also published a “baseless” report of the Prime Minister’s meetings with the leaders of Turkey and Malaysia in New York, in an attempt to sabotage Pakistan’s core national interests of brotherly relations with Saudi Arabia for “petty political gains”.
“The desperation of the opposition is evident by their attempt to sabotage brotherly relations enjoyed by the two Islamic countries,” the statement said.

Prime Minister Imran Khan along with Turkish President Recep Tayyip Erdogan and Malaysian counterpart Mahathir Mohamad have agreed to jointly counter anti-Islam forces, one venture of this will be to establish a joint television channel. Three leaders reportedly took part in a trilateral summit on the sidelines of the 74th session of the United Nations General Assembly to counter Islamophobia.

Previous articleEhsaas Saylani Langer Scheme: Ambitious Project to Feed Millions with Dignity
Next articleHyundai all set to surprise Pakistan on the 8th of October

24 July 2021
Previous articleEhsaas Saylani Langer Scheme: Ambitious Project to Feed Millions with Dignity
Next articleHyundai all set to surprise Pakistan on the 8th of October