This decision has come when FATF is deciding Pakistan's fate in grey list. Pakistan seems to be serious about terror financing that after years it finally verdicts against Hafiz Saeed. 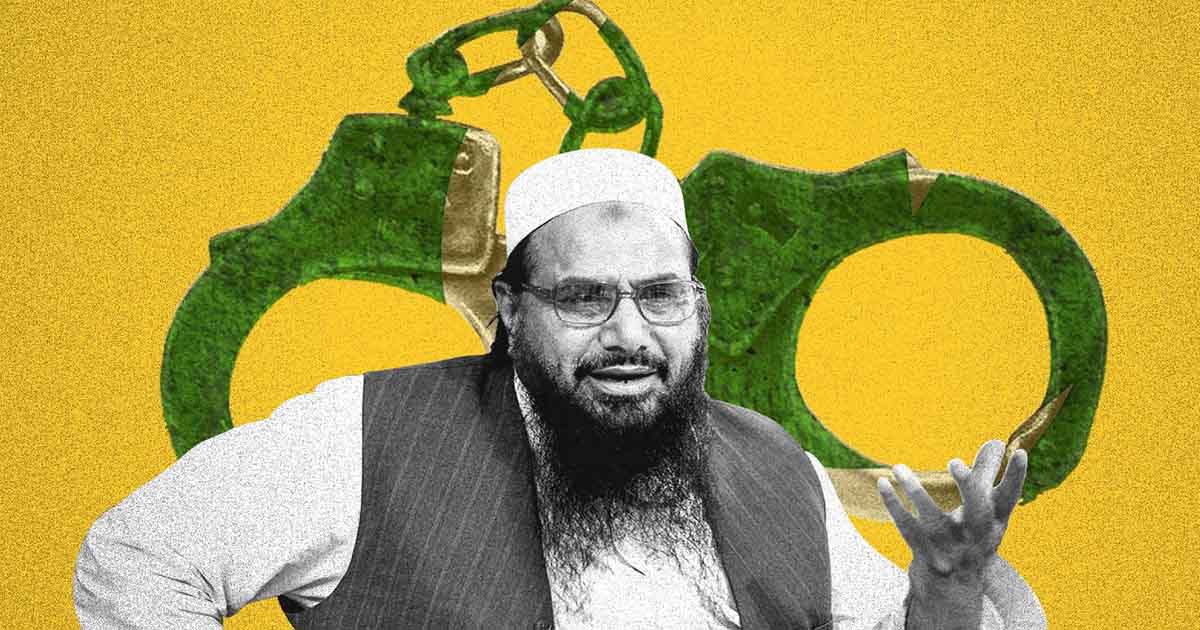 The Anti-Terrorist Court (ATC) in Lahore under Judge Arshad Hussain Bhutta convicted Hafiz Saeed on February 12 and jailed him for 11 years. His colleague Zafar Iqbal was also given 11 years jail term. 23 prosecution witnesses testified but none could provide any concrete evidence.

The prosecutor maintained that Lashkar-e-Taeba (LeT) and Jamaatud Dawa (JuD) were two sides of the same coin and since LeT had been declared a proscribed organization vide UN resolution 1267 and put under sanctions, Pakistan being a member of the UN must take action.

Despite the fact that the prosecution couldn’t prove the charge of terrorism, the two accused were declared guilty on account of being member of a banned outfit, supporting and arranging meetings of proscribed organization, illegal fund raising and buying properties from the raised funds. Besides Indian media, a segment of Pak media together with handful of well-heeled liberals in Pakistan have been demonizing Hafiz Saeed and his JuD and presenting him an asset of military establishment.

Hafiz Saeed was the founder of LeT in early 1990s, which was actively involved in armed Kashmiri freedom movement. Once LeT and some other Kashmir focused Jihadi groups like Jaish-e-Muhammad (JeM) were banned by Gen Musharraf under pressure from India and USA in 2002/03, Hafiz Saeed detached himself from LeT and created an educational & charitable outfit at Muredke near Lahore, which he named JuD. His set-up is open to all and all activities are transparent. He, however remained on the radar of India as well as USA.

Between 2001 and 2008, all terror attacks in India were put in the basket of Azhar Masood led JeM or LeT. The latter was blamed for the Mumbai attacks in November 2008. India also accused ISI that it trained and backed LeT. Since then, India has been constantly pressing Pakistan to punish Hafiz Saeed and other LeT leaders. At the behest of India, the UN and the US declared him a global terrorist and put $10 million bounty as his head money.

Hafiz Saeed was arrested by Pak authorities 8 times since 2011 and put on trial but the courts couldn’t find any trace of his involvement in Mumbai attacks and had to be released. Neither India could furnish any proofs. Whatever evidence it sent was too flimsy and insufficient to convict him, but India duly backed by USA clung to its stance.

India couldn’t supply any proofs because Mumbai attacks were masterminded by RAW-Mossad combine in collusion with CIA with a view to undermine the sudden flare up of unarmed movement in IOK in the summer of 2008, get ISI declared a rogue outfit and Pakistan a terror abetting state. To make it look real, India made hue and cry, suspended composite dialogue and conditioned recommencement of talks to the conviction of the so-called accused. USA also kept pressing and advising Pakistan to punish the accused to ease tension, renew the process of composite dialogue to resolve of Kashmir dispute and to return to normalcy.

Ajmal Kasab, the lone surviving accused was tried and hanged within the premises of jail without allowing Pakistani legal team or the Interpol to meet him. India’s claim that Kasab was a Pakistani hailing from village Faridkot was false. He had been kidnapped from Nepal by RAW sometime back and was put in a secret detention center for subsequent use.

The Mumbai drama was initially exposed by the officials of Indian Home Ministry led by Satish Sharma in 2011, who submitted affidavits in Indian Supreme Court asserting that the attacks were an in-house affair to achieve objectives against Pakistan. Fake Hindu saint Aseemanand undergoing trial of Samjhota Express train blast in 2007 confessed that all the terror attacks in India were the handiwork of Indian terrorist group Abhinov led by Lt Col Purohit of which he was one of the member.

Murdered Inspector Hemant Karkare had rounded up the gang and the case was under trial. He was murdered by unknown assassins on the night of 26 November 2008 in Mumbai and thereafter the case was closed and all the accused were set free. As if these revelations were not enough to expose India’s lies and its penchant for false flag operations, two books authored by Indian writers and one by German author spilled the beans.

With so much incriminating material available, Pakistan was in a good position to put India on the mat and expose its ugly face. Unfortunately, PPP and PML-N governments opted to retain Pakistan’s traditional policy of appeasement. Instead of rebuking Indian bogus version, Indian narrative was agreed to. Several LeT leaders including Hafiz Saeed were arrested and put on trial. Apologetic and defensive stance emboldened India to continue whipping Pakistan under the charge of terrorism.

India under fascist Narendra Modi hardened its stance and stated that till such time Pakistan didn’t control terrorism, it will not talk on Kashmir. Modi forced Nawaz Sharif at Ufa in 2015 to exclude Kashmir from the agenda of future talks and to accord priority to the issue of terrorism.

Pakistan’s meekness encouraged India, Afghanistan and USA to dub Pakistan a breeding ground and an epicenter of terrorism and most dangerous country in the world. These labels were given in spite of Pakistan security forces achieving remarkable results in fighting foreign-sponsored terrorist groups in FATA, Swat and Baluchistan and suffering the most.

Failing to suppress the liberation movement in IOK, India not only kept the Line of Control in Kashmir heated up but also broke all records of state terrorism and human rights against Kashmiris in IOK. Finding that Kashmir was slipping out of its hands, RAW conducted a false flag operation in Pulwama on February 14, 2019 which had three-fold objectives.

The new economic and financial managers appointed on the choice of IMF, carried out heavy devaluation of the currency under the hope of boosting exports

To distract the attention of the world from its human rights abuses against Kashmiris and discredit freedom movement; secondly, to create justification for a surgical strike inside Pakistan, and thirdly, to whip up anti-Pakistan emotions in India and enlarge the vote bank of BJP for elections in June.

Indian Mirage 2000s intruded in Balakot on February 24 last year under the pretext of taking revenge for Pulwama terror attack. The jets hurriedly released their bombs in a deserted place causing no damage or human casualty due to timely intervention of PAF jets. However, India claimed that it had destroyed a JeM camp.

In reaction, PAF made a counter move on the night of 26 February by dropping missiles next to three sensitive targets inside IOK. Indian army chief Gen Bipen survived by the skin of his teeth. In the air duel, PAF pilots shot down one Su-30 and one MiG-21 and captured one pilot.

India also lost one helicopter along with the crew due to its own firing. When India tried to strike 8 targets with Brahmo missiles on the night of 27th, Pakistan announced that it had marked 16 targets which took the air out of Modi’s jingoism. Smarting under series of humiliations, Modi ventured to make disputed IOK integral part of India on August 5, 2019 and is now threatening to annex AJK.

Anguished over their failure to cow down Pakistan or to disable its nuclear program, the three strategic partners India, USA and Israel assisted by puppet regime in Kabul got further upset over the rapid progress made by CPEC. They see it as a dangerous monster capable of overturning their global ambitions. The trio is continuing with proxy war to bleed Pakistan and scuttle CPEC through random attacks. Hybrid war was launched to create political destabilization, accentuate divisions in society, turn the youth against the army and spoil Pak-China relations.

Additionally, IMF and FATF were used as tools to meltdown Pakistan’s economy and to make it a compliant state. The IMF doled out $ 6 billion loan on stringent conditions forbidding it to use even a penny of the loan money on CPEC or to repay loans of China. The FATF after putting Pakistan in grey list issued a long list of demands saying if these are not complied with, the country will be blacklisted. The list included the arrest and conviction of JeM head Azhar Masood, and Hafiz Saeed and other LeT leaders.

JuD has also been imparting free education to the poor and funds to the needy. He is held in high esteem among the Kashmiris living both sides of the divide and has a huge following in Pakistan

While India is leaving no stone unturned to put Pakistan in black list, the US is quietly pulling the strings of FATF to keep Pakistan in grey list for some more time. Alice Wells during her recent visit to Islamabad had admitted that the US would like to keep Pakistan under pressure through FATF till such time Pakistan agree to abide by its dictates. She declared CPEC and friendship with China harmful for Pakistan.

The new economic and financial managers appointed on the choice of IMF, carried out heavy devaluation of the currency under the hope of boosting exports. They imposed heavy taxes, raised the prices of fuel, gas, and of daily commodities in order to generate revenues. These measures didn’t improve the health of economy and made the lives of the people difficult. Desperate to uplift the sinking economy and to fulfill the promises made to the people, and to save from getting blacklisted, the cornered government hastened to arrest Hafiz Saeed.

After keeping him under detention for about six months, he was put on trial. The decision of the court was hailed by Alice Wells as well as Trump. India is also happy and sees it a triumph of its consistent efforts. India will now push for his trial on charges of attacks in Mumbai with a view to net ISI and Pakistan in the trap of terrorism.

Making Hafiz Saeed a sacrificial goat just before the crucial meeting of FATF at Paris from 12-21 February in which Pakistan is hoping to get out of grey list and become white go against principles and ethics.

For India, Hafiz Saeed has been a pain in the neck since he always raised his voice against Indian barbarities. As head of Difah Pakistan Council, he has been organizing big public meetings and rallies and has been a moving force behind the Kashmiri freedom struggle.

His charity outfit Khidmat-e-Khalq provided immense assistance to the victims of natural calamities and was among the first to reach the stranded people caught in the devastating earthquake in AJK in 2005. JuD has also been imparting free education to the poor and funds to the needy. He is held in high esteem among the Kashmiris living both sides of the divide and has a huge following in Pakistan.

Read more: Hafiz Saeed is already declared Global Terrorist: Pakistan to decide today if he is?

His conviction has not been well received in J&K and by majority of people in Pakistan particularly the Far Right. They view him as a philanthropist serving humanity, highly patriotic Pakistani and not a terrorist. They feel he has been jailed to please USA and to mollify India.

Already an impression is gaining currency that the government has betrayed the Kashmiris and that neither it is taking any action to provide relief to the marooned 8 million Kashmiris locked up in biggest open prison since August 5, nor it is allowing others to start a Jihad. Since Hafiz Saeed has never been convicted by courts on account of terrorism or funding terrorists, in all likelihood the decision of ATC if challenged might be overturned by Lahore High Court.