“Pakistan should take measures to ensure that Jadhav is not executed”, ICJ 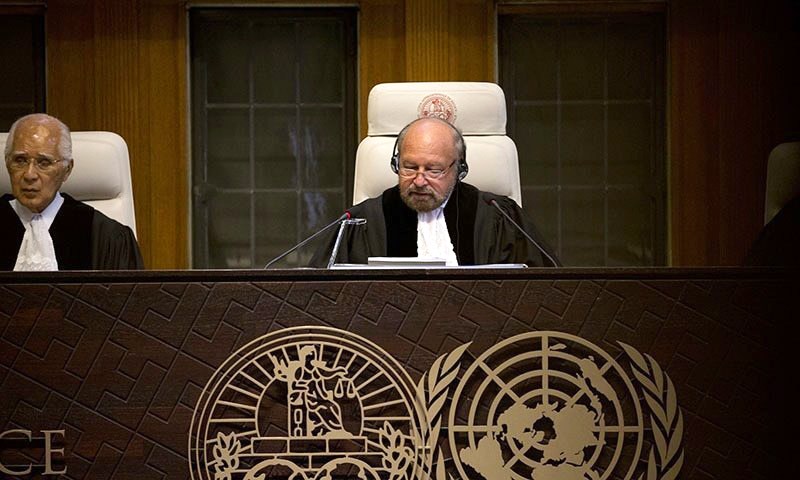 The International Court of Justice (ICJ), on Thursday, ordered Pakistan to stay the hanging of self-confessed Indian spy, Kulbhushan Jadhav, until it rules in the treaty violation case.

Announcing the verdict, president Judge Ronny Abraham said, “Pakistan should take measures to ensure that Jadhav is not executed until ICJ’s verdict.”

He further asserted “court considers it a failure on the part of Pakistan to present counselors to Jhadav. A link exists between the rights invoked by India and the provisional measures being sought by the state.”

Provisional measures were announced after the court established the urgency of the case and its jurisdiction. The case is now up for international scrutiny.

Pakistan and India at the Hague

India and Pakistan are fighting an important legal battle at the International Court of Justice (ICJ) over the case of Kulbushan Jadhav’s death sentence. The public hearing took place on Monday, 15th May. Representatives from both sides vociferously put forward their diametrically different arguments. The Pakistani counsel iterated that Jadhav, an Indian National, was sent from Delhi to carry out and facilitate acts of terror on Pakistani soil.

Pakistan talked about the confessional video of Jadhav where he admitted to carrying out espionage and terror-related activities. Besides, the credentials on his passport were also questioned.

India denied that Jadhav was a spy in its application last week and lodged a protest at the ICJ accusing Pakistan of “egregious violations of the Vienna convention”.

“India has been unable, or perhaps unwilling, to provide an explanation for this passport which is the most obvious indication of covert and illegal activity,” Mr. Faisal from the Foreign affairs said during the hearing.

Mr. Faisal told the judges that rather than imposing emergency measures, a hearing on the merits of the case within six weeks could be scheduled.

India, however, denied that Jadhav was a spy in its application last week and lodged a protest at the ICJ accusing Pakistan of “egregious violations of the Vienna convention”.

India believes that the farcical nature of the proceedings and unjust trial by a Pakistan military court… has led to a serious miscarriage of justice,” said Deepak Mittal, an official at India’s external affairs ministry.

Read more: Pakistan and India skirmish at the Hague

India argued that because the case is likely to take months or years to resolve, the ICJ must immediately order Pakistan to “take all measures necessary” to prevent Jadhav’s execution until the court has given its decision.

Every country has undeniable right to punish the terrorists and the ICJ could not intervene in criminal cases, especially those which pertain to issues of national security.

The Pakistani counsel, Khawar Qureshi, was entrusted with presenting the Pakistani version. He argued that India had concealed facts during the hearing in an attempt to secure the stay order against the death sentence awarded to Jadhav for perpetrating seditious acts in Pakistan.

He said that India could not justify as to why Jadhav was arrested in Balochistan and operating under a cover name with dubious credentials?

He further accentuated that every country had undeniable right to punish the terrorists and the ICJ could not intervene in criminal cases, especially those which pertain to issues of national security.

India claimed that Jadhav was kidnapped from Iran, where he was carrying on business after retiring from service.

It is noteworthy to recall that Pakistan accepted ICJ’s compulsory jurisdiction on 29th March 2017. However, para ‘e’ states that the jurisdiction does not apply to matters of national security.

Mr. Qureshi stated that Indian application for stay order was based on the distortion of facts as the Indian counsel was deliberately hiding proofs against Jadhav.

Read more: What are Pakistan’s options in ICJ on the Kulbhushan Case

The counsel maintained the case related to the sovereignty of Pakistan and thus did not fall under the ambit of the ICJ.

India claimed that Jadhav was kidnapped from Iran, where he was carrying on business after retiring from service.

New Delhi primarily based its arguments on the nature of trial that was carried out by the military court. It insisted that Pakistan did not share the information about the case, snubbing requests for documents including the charge sheet, and had also failed to provide Jadhav with consular access.

Islamabad also refused to grant a visa to Jadhav’s parents who wished to travel to Pakistan to visit their son.

Pakistan picked up on the limited jurisdiction of the ICJ and the solid grounds on which Jadhav has been sentenced. Delhi, on the other hand, has taken exceptions to the way the proceedings have been carried out.

Jadhav “has been denied the right to be defended by a legal counsel of his choice,” Mr. Mittal said, alleging that the video confession was taken under duress. “All that we know is what we have seen in the media in Pakistan.”

Both Pakistan and India robustly presented their case. Pakistan picked up on the limited jurisdiction of the ICJ and the solid grounds on which Jadhav has been sentenced. Delhi, on the other hand, has taken exceptions to the way the proceedings have been carried out. It was India who moved the ICJ on May 8, against Pakistan claiming that Pakistan has violated the Vienna Conventions on Counselor Relations (VCCR). This move was a deviation from its 1974 declaration where it outlawed ICJ mediation in cases against Commonwealth nations. India had moved the UN court urging it to suspend Jadhav’s sentence and declare that it was arrived at “in brazen defiance of Vienna Convention rights”. Pakistan had defended its position by terming New Delhi’s story a far-fetched one as criminal cases did not fall within the purview of the Vienna Convention.

What next on the matter?

The decision is an interim order that has brought the case within the purview of the ICJ. Theoretically, it opens up all other bilateral cases between the two neighbors, something which New Delhi has resisted in the past. It is important now to convince the court of the merits of Jadhav’s death sentence in the next phase of proceedings in The Hague.

The court said, “India could not satisfy ICJ over the merit of the case. Access to Jadhav is not possible under Vienna Convention. Vienna Convention does not apply to persons suspected of espionage.”

Perhaps it is a chance for Pakistan to prove its assertions regarding Indian involvement in inimical activities in the country. It is, by no means, a settlement of the case in India’s favor but opens it up for intense examination and investigation by an international body.

Previous articleMusharraf’s demands refused by Nawaz Govt.
Next articleSoft drinks to be banned in schools

18 June 2021
Previous articleMusharraf’s demands refused by Nawaz Govt.
Next articleSoft drinks to be banned in schools

Saudis say: “we don’t want war; but will defend ourselves”