Pakistani government in its effort to facilitate the Sikh pilgrims have issued a commemorative coin on 550th birth anniversary of Baba Guru Nanak. Sikhs from all over the world will be travelling to Pakistan to pay their respects. 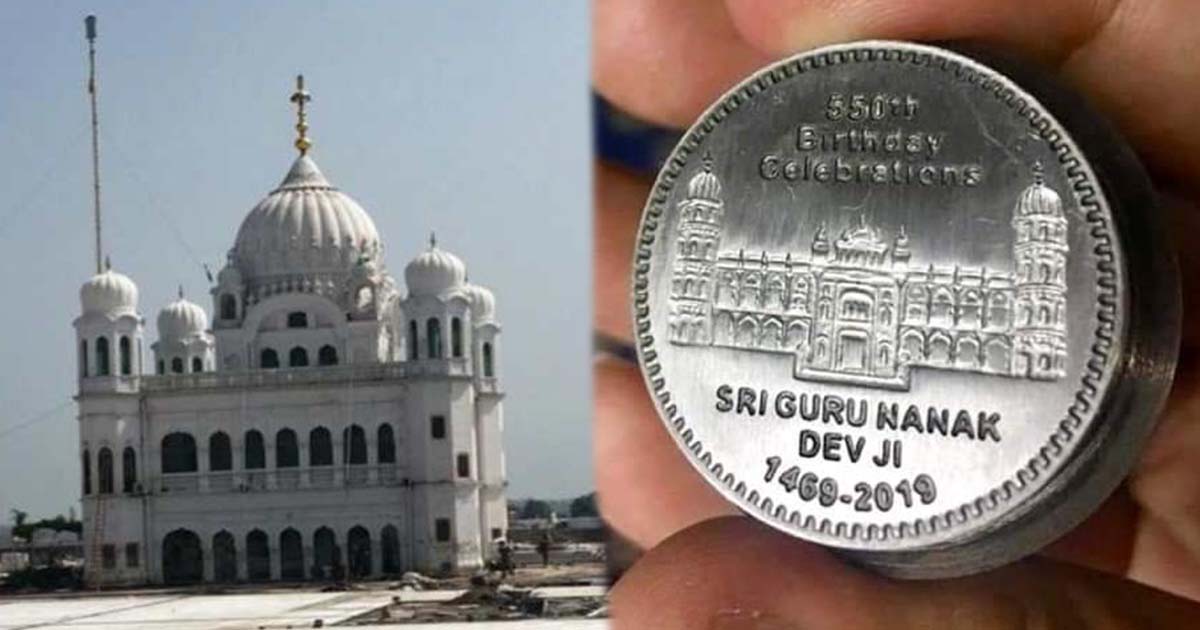 The government of Pakistan has issued commemorative coins on the occasion of the 550th birth anniversary of Baba Guru Nanak on Tuesday. The move comes ahead of the inauguration of Kartarpur Corridor scheduled on November 9th, which will also coincide with Pakistan’s Iqbal Day.

Prime Minister Imran Khan will inaugurate the Kartarpur Corridor, which will provide visa-free passage between Darbar Sahib in Kartarpur and Dera Baba Nanak shrine in India. The Kartapur Corridor is aimed at reducing the hassles for Indian-Sikh pilgrims, who otherwise had to travel via Wagah Border, Lahore to Kartapur and Nankana Sahib.

Earlier on Tuesday, Pakistan announced that it would issue additional visas to Indian Sikh pilgrims above the 3,000 limit allowed under the bilateral protocol for their visit from November 5 to 14.

Read more: AS Kartarpur Corridor near completion: BJP tries to take all credit

Governor Punjab Chaudhry Sarwar is at the helm of facilitating the Sikh Pilgrims visiting Pakistan. He convened a meeting to review the preparations and directed all the concerned departments and police officials to submit the final report by October 30th. While addressing the conference, he asserted that the security and safety of Sikh pilgrims is the foremost responsibility of the Government of Punjab.

After eight months of talks and negotiation, Pakistan and India gradually signed an agreement on the opening of the Kartarpur Corridor last week. The state-level agreement amid stiff tensions between both the countries on Kashmir issue.

Where I stand is where believers of the faith stand and look at Kartarpur Sahib Gurudwara through binoculars.

Now dreams of many would turn into reality when they travel the 4.5 km stretch between India and Pakistan to pay visit to the holy site. pic.twitter.com/1Hxh3y1s5G— Geeta Mohan گیتا موہن गीता मोहन (@Geeta_Mohan) October 24, 2019

As a Sikh ! Thank you Pakistan for your love and Respect towards our religion and community !!

In order to commemorate the services of Baba Guru Nanak to humanity, PM Khan also laid the foundation of a university named after Baba Guru Nanak in Nankana Sahib on Monday.

The Sikh community on both sides of the border hailed the agreement, with many Sikhs particularly appreciating Pakistan for initiating the process. Indian actress Raveena Tandon also shared the video of Kartarpur shrine, hailing the agreement between India and Pakistan.

Former Indian Prime Minister Manmohan Singh will be leading the first batch of Sikh pilgrim visiting Kartarpur Corridor. He conceded to visit for Kartarpur Corridor’s inauguration after Pakistan formally sent an invitation to the former minister.

The opening up of Kartarpur Corridor is a testament to Pakistan’s relentless efforts towards stabilising peace and security in the country. Pakistan is pacing up to open the country for international visitors as much as possible. From revamping tourism, to a policy of intolerance towards terrorism, Pakistan is seamlessly sailing towards a secure country. The recent visit of Britain’s royal couple further supported Pakistan’s campaign to rise again globally.

Much awaited #KartarpurCorridor is finally set to open। 20$ "service fee' is a non-issue for Sikhs। Singhs will remain grateful to Pak for fullfiling demand initiated by Navjot Singh।— Davinder Singh (@Davinde13167607) October 24, 2019

I congratulate the Indian & Pakistani government on the signing of #KartarpurCorridor agreement. The long standing wish of Sikhs around the nation of 'Khulle Darshan Didar' of Sri Darbar Sahib, Kartarpur will now be fulfilled with opening of Kartarpur corridor from 9th November. pic.twitter.com/OyFT45FFYT

How will Sharif save his political career after NAB indictment?