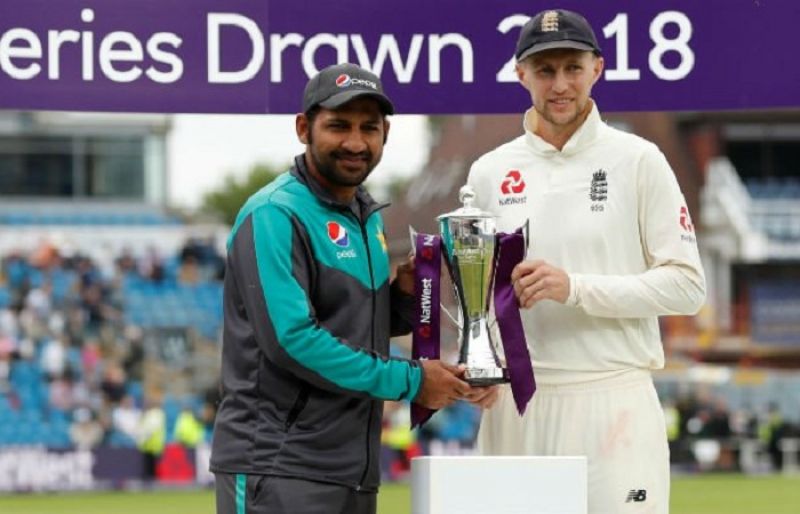 Pakistan captain Sarfraz Ahmed insisted he was proud of his youthful side even after an innings and 55-run defeat at Headingley denied them a Test-series victory in England.

That overwhelming loss, completed inside three days on Sunday, meant the two-match campaign ended all square at 1-1 following what Sarfraz said was Pakistan’s “perfect” nine-wicket victory in the first Test at Lord’s.

Now we have five Tests in the UAE (two against Australia and three against New Zealand), then we have three in South Africa and that will help us mature as a Test team,” he added.

Defeat left Pakistan still looking for their first Test series success in England since 1996 when fast-bowling greats Wasim Akram and Waqar Younis were in the side.  Despite skittling England out for just 184 in their first innings at Lord’s, Sarfraz elected to bat after winning the toss in Leeds.

Read more: Sarfraz believes Pakistan can be even better against England

Even so, Pakistan would still have expected to have made more than their 174, which featured a third fifty in as many Tests from teenage leg-spinner Shadab Khan. That total meant they were always chasing the game and, was just one individual effort away from conceding a large first-innings lead.

Having fielded brilliantly as a side at Lord’s, Pakistan saw Hasan Ali drop a routine catch when Jos Buttler was on four.The dashing Buttler punished Pakistan with an unbeaten 80 in an England reply of 363.

Pakistan, 189 behind on first innings, then slumped to 134 all out in 46 overs second time around as their top order again failed to fire. But having also overseen a victory over Test debutants Ireland in Dublin during this tour, Sarfraz was pleased with Pakistan’s progress.

Despite skittling England out for just 184 in their first innings at Lord’s, Sarfraz elected to bat after winning the toss in Leeds.

“It’s disappointing that we had a chance to win the series but unfortunately we didn’t play well here.”

Overall there were still plenty of plus-points for Pakistan, not least the bowling of seamer Mohammad Abbas who took a match-winning eight for 64 at Lord’s.

“I am proud of my young team, the way Abbas is bowling, Shadab is doing well, Faheem Ashraf did well, so I’m really disappointed that we didn’t win (at Headingley) but 1-1 is good for us,” said wicket-keeper Sarfraz.

Experienced opening batsman Azhar Ali averaged just 16.75 during the series while Sarfraz averaged 10.33 — well below his career Test mark of 37.78.

“Azhar is our main batsman, it’s correct he is not in good nick but he scored a good fifty at Lord’s,” said Sarfraz. As for his own batting, Sarfraz added: “I am not satisfied with my batting in the series.

“I committed mistakes and played a few bad shots.”

Pakistan arrived for this tour has gone several months without a Test since a 68-run defeat by Sri Lanka in Dubai and Sarfraz said playing three in relatively quick succession was always likely to prove a tough challenge for his team.

“We played our last Test in October, so it’s difficult when you play a Test after five or six months. Test cricket is a different format, you have to adjust to five-day cricket. If you have to field for two-three days, it’s tough,” explained Sarfraz.

“The more you play Test cricket, you get to mature as the Test player. Now we have five Tests in the UAE (two against Australia and three against New Zealand), then we have three in South Africa and that will help us mature as a Test team,” he added.

US finally invites Pakistan to climate summit after snub

US condemns ‘FreeKarachi’ campaign against Pakistan

US or China? Who handled Coronavirus better?