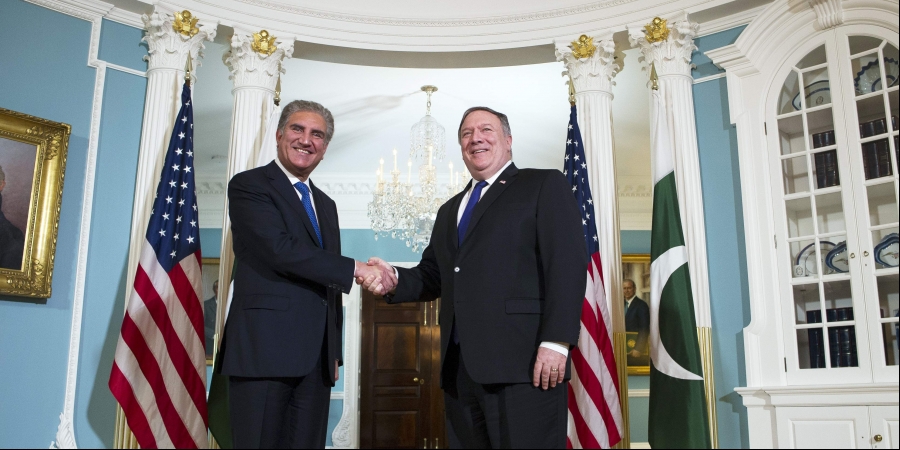 Pakistan pledged Wednesday to support negotiations with the Taliban to end Afghanistan’s 17-year war as it asked the United States to restore military aid and stop blaming Islamabad for the extremists’ strengths.

Foreign Minister Shah Mehmood Qureshi visited Washington to explain the Afghanistan strategy of new Prime Minister Imran Khan, who has long advocated talks over military action with the Taliban and other Islamist insurgents.

A month after Washington cut $300 million in military aid, Qureshi said he found Secretary of State Mike Pompeo “ready to listen” to Pakistan and said he was returning to Islamabad “slightly more hopeful” than before.

Pakistan had been the main supporter of the Taliban regime which imposed an austere brand of Islam on much of Afghanistan until a US military campaign launched after the September 11, 2001 attacks. The United States has pressed for years for Pakistan to crack down on militant groups involved in Afghanistan as well as virulently anti-Indian groups that operate virtually openly.

It says the insurgents have safe havens in Pakistan’s border areas and links to its shadowy military establishment, accusations which Islamabad has repeatedly denied. Trump has accused Pakistan, where US commandos killed Al-Qaeda chief Osama bin Laden, of duplicity.

Qureshi said Pakistan would act “in good faith” to jumpstart diplomacy with the Taliban, whose representatives held a breakthrough meeting in July in Qatar with US representatives in a tentative bid to try to end the longest-running US war.

The State Department notably did not say whether Pompeo addressed Pakistan’s position on extremism.

“Pakistan is willing and Pakistan will use all its influence to do that. We feel that Afghanistan’s stability and peace are linked to ours,” Qureshi said at the US Institute of Peace a day after meeting Pompeo.

But he added: “Contrary to the largely held view here, our influence on the Taliban is diminished.” He said he believed that the Taliban’s shift to negotiations, as well as an unprecedented if temporary ceasefire, was based on the militants’ own calculations.

Read more: Is the agreement to “reset Pak-US” ties enough for the revival…

“Even the Taliban recognize that things have changed in Afghanistan. They can at best maintain a stalemate but those days are gone when they will just go in and take over Kabul.”

Qureshi said Pakistan “cannot and should not be held responsible for the failures in Afghanistan” as he pointed to disunity in the Kabul government as well as corruption.

“I have seen or read a lot of criticism and think it’s unfair not to recognize the contributions Pakistan has made to the successes that you’ve had in Afghanistan — and you’ve had successes despite the challenges,” he said.

The State Department said he asked Islamabad to “take decisive action against all terrorists operating in Pakistan.”

Calling for renewed cooperation with the United States, Qureshi said: “Cutting off training, not giving precision equipment that could have been used against terrorism I don’t know to what extent that will help.”

Trump had called for years for a withdrawal from Afghanistan, questioning what more can be achieved from a war that has claimed about 2,400 US lives, but the real estate mogul turned politician decided to stay the course after advice from security officials.

Pompeo “agreed that there was momentum to advance the Afghan peace process and that the Afghan Taliban should seize the opportunity for dialogue,” Nauert said. The State Department notably did not say whether Pompeo addressed Pakistan’s position on extremism.

In August, Pompeo congratulated Khan in a telephone call when he took office as prime minister. The State Department said he asked Islamabad to “take decisive action against all terrorists operating in Pakistan.” Pakistan insisted that the issue never came up.