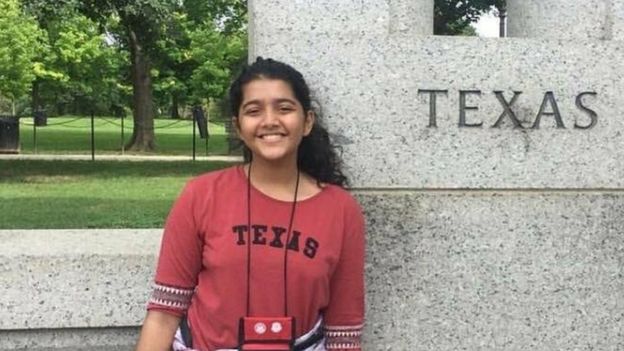 The United States has been suffering from the menace of mass shootings where teenagers bring firearms to their schools and kill their fellows indiscriminately. The latest in the vicious loop of unfortunate school shootings happened in a school in Santa Fe Texas where a 17-year-old student opened fired in his art class, killing 10 people, mostly students. Dimitrios Pagourtzis, the student who carried out the shooting, used a shotgun and a .38 revolver in the act. The arms were believed to be owned by his father. His motive was to kill as many students at the school as possible and eventually commit suicide. But he could not gather the requisite courage for the latter part and surrender to police.

The victims include a Pakistani exchange student, Sabika Sheikh, who was about to return to her country next month before Eid. She and a substitute teacher, Cynthia Tisdale, are the only officially acknowledged victims so far among the total of 10 dead in the tragic incident. “Ms Sheikh was in Texas as part of the Youth Exchange & Study (YES) Programme,” the Pakistani embassy in Washington said in a statement. “Our thoughts and prayers are with Sabika’s family and friends.

Ambassador Aizaz Chaudhry spoke to the father of Sabika Sheikh expressing heartfelt condolences over the tragic death of his daughter.” Abdul Aziz, Sabika’s father, told AFP in Pakistan that he learned of his 17-year-old daughter’s death on CNN. “We are still in a state of denial,” he said. “It is like a nightmare. …There is a general impression that life is safe and secure in America. But that is not the case.” US Secretary of State Mike Pompeo said Sabika was ‘helping to build ties’ between the US and her native country and offered his condolences to her family and friends.

Trump did not specifically mention guns, background checks, gun control beyond keeping ‘weapons’ out of the hands of those ‘who pose a threat’ or the possibility of arming teachers or school staff, a plan he’s endorsed before.

The assailant, Dimitrios Pagourtzis said in his statement to police that he wanted “his story to be told, therefore he spared the lives of those students whom he liked”. Police said that it was a well-planned activity as the suspect planted homemade explosives both inside and outside the school building. Such tragic incidents are happening more often in the United States, where according to a report, school children killed in mass shootings were double in number to the US soldiers dying in combat in 2017.

The United States tops the list of the most heavily armed country in the world with 88 guns per 100 people. It is the availability of these firearms which require little to no training at all in their usage because of their sleek design and mechanism, which the modern automated weapons come with. Every once in a while, a psychologically demented teenager decides to use one of these readily available weapons to take the lives of his/her fellows.

In February 2018, another mass shooting incident took place in Parkland, Florida resulting in the death of 17 teenagers. The incident was followed by massive student protests all over the United States who were demanding strict gun laws in order to prevent events, such as this one, to happen in future. But because guns and ammunition is a multi-billion dollar industry in the United States, the lobbying against such laws being enacted is too strong to let Congress decide something substantial in this regard.

President Donald Trump, who also happens to be the member of the National Rifles Association (NRA) said: “This has been going on too long in our country, too many years, too many decades now”.  We grieve for the terrible loss of life and send our support and love to everyone affected by this absolutely horrific attack.” Trump did not specifically mention guns, background checks, gun control beyond keeping ‘weapons’ out of the hands of those ‘who pose a threat’ or the possibility of arming teachers or school staff, a plan he’s endorsed before.

In fact, the proposition of arming teachers in schools to block the way of these “lone wolfs” immediately before they inflict severe damage also comes under question in this case. The school in Texas where the shooting occurred had two trained armed police officers present at the premises at the time of the attack. Still, they could not help save the lives of those 10 people. Though arguably the toll may have been much higher in case no one was there to counter the rogue student, the loss of one life at the campus by a bullet still calls for actions more than just arming the teachers. The policy change, gun laws, and social reforms can certainly help, for starters.

Syria: A battle playground for US and Russia