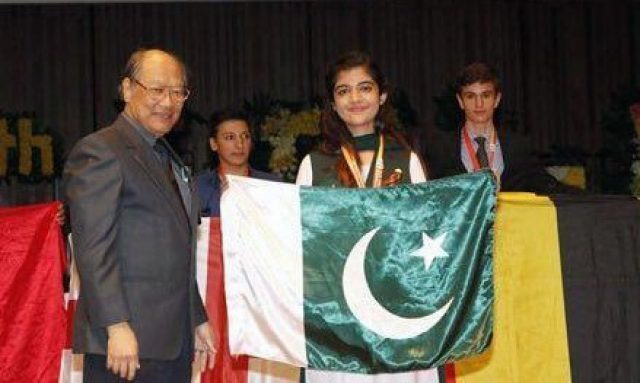 A Pakistani student Muhammad Suleiman Thaniana of Karachi Grammar School won the Bronze medal at International Chemistry Olympiad competition held in Slovakia and Czech Republic. The contest kicked off on 19th July and ended on 29th July. A team of four members from Pakistan led by Dr. Khalid Mohammed Khan and Dr. Muhammad Raza of HEJ participated in the event. A total of 304 students from 76 countries participated in the event.

Further grooming and screening of the students through a series of training camps and tests at the HEJ Research Institute of Chemistry led to the selection of the four-team members. This Olympiad provides pre-university students a chance to solve the challenging theoretical and experimental science problems.

The students were supposed to answer a five-hour theory paper and a five-practical exam. On the other hand, India has bagged two Gold medals and two Silver medals in the contest. A team of four A-Level students from the UK bagged three gold medals and one Silver medal at the 50th International Chemistry Olympiad competition.

The students from the USA outperformed other contestants as it managed to win four Gold medals in this year’s International Chemistry Olympiad. China, which won the top scoring gold medal, was the only other country to win four golds this year.

This year, competition organizers awarded a total of 35 gold medals, 65 silver medals, and 95 bronze medals to the group of 300 high school students representing 76 countries. Each country is allowed to send up to four students to the competition.

Previous articleMayhem on the Election Days: How events unfolded on the D-day?
Next articleECP show mettle against abusing politicians

News Desk - 31 July 2021
A Pakistani guy named Ghazi Taimoor in the UK has been making rounds on social after his story of returning the lost wallet to...

31 July 2021
Previous articleMayhem on the Election Days: How events unfolded on the D-day?
Next articleECP show mettle against abusing politicians

‘Is this Pakistan’: Biscuit TVC slammed for depicting Balochi culture with AK-47