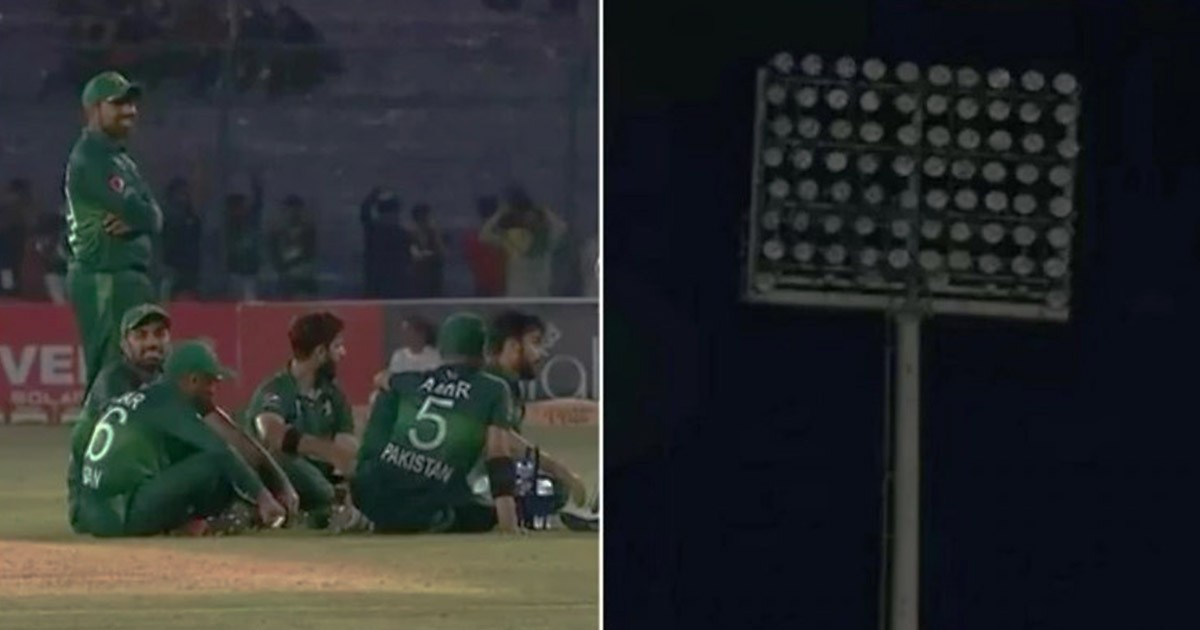 The second One-Day International match between Pakistan and Sri Lanka was disrupted twice following the floodlights failure during the match. The six floodlights in the stadium went off twice during cricket match leaving Karachi’s National Stadium dark.

The glitch, however, offended the spectators since the first ODI was washed out due to the torrential rain that hit the city last week. Despite obstacles, Pakistan defeated the Sri Lankan team with 67 runs.

Play suspended due to floodlight failure. (Bangladesh vs New Zealand). It can be happened everywhere in the world. before creating memes or Making fun first check where else it have happened https://t.co/DrKTaW6Vjg 2017 during ind vs Nz t20 it has happened. floodlights failure

Recall that game which India hosted few years back that also stopped due to floodlight failure. Well, very soon you will also going to hear loud and clear ' Kashmir got Independence'. @majorgauravarya https://t.co/uF1B53V4a9

Nevertheless, Pakistani social media users trolled Pakistan Cricket Board administration for malfunctioning and mismanagement, calling it out for unpreparedness to host the first international cricket match series after a decade. Both the matches were marred by controversies.

PCB confronted backlashes over the waterlogged field, which canceled the first ODI in Karachi on Friday; heavy rainfall had engulfed the city an hour before the beginning of the first ODI.

There was floodlight failure in National Stadium Karachi,
The game is on again !
Sri Lanka are looking good at this stage.#PakvSL #CricketComesHome❤️🇵🇰

Even Indian Twitter users jeered at Pakistan for the floodlight failure, denigrating Pakistan for its incapacity to host international cricket matches. Pakistani netizens instantly reminded Indian trolls of a similar glitch, which happened in Indian in 2017. Some sane voices on social media asserted that such a technical malfunction could happen anywhere. They quoted instances of floodlight failure during Bangladesh and New Zealand match and India vs New Zealand during the T20 match in 2017.

But such things can happen anywhere. It was only a small delay. Earlier this year, a Big Bash match in Brisbane was actually abandoned due to floodlight failure.

A cricket commentator and sports journalist Faizan Lakhani responded to the criticism on PCB asserting that such problems are unwarranted and do not amount to incompetence. He added that the response time to fix the glitch matters the most, which PCB did efficiently. He also shared the picture of the Edgbaston Stadium in Birmingham, with a waterlogged field after the rain.

PCB has faced a lot of bashing in last few days, first for water logged outfield after heavy rains & today for floodlight failure. Such things can happen anywhere, here’s a pic of Edgbaston after rain in B’ham & SS of news re BBL match being abandoned due to power failure. pic.twitter.com/q156DS9ugs

Pakistan has strived hard to resume international cricket in the country following its suspension after a terror attack on the Sri Lankan team in Lahore in 2009. The T20 matches of the series will be held in Lahore. Security has been tightened in the city during the cricket series.