Pakistan’s balancing act in the Gulf, Qatar to invest heavily in Pakistan

Qatari Emir's visit to Pakistan is expected to bring an investment worth $22 billion that will be aimed at development in various fields. The visit announcement has come at a time when Pakistan continues to balance its alliances in the Gulf amid crisis in the region since 2017. 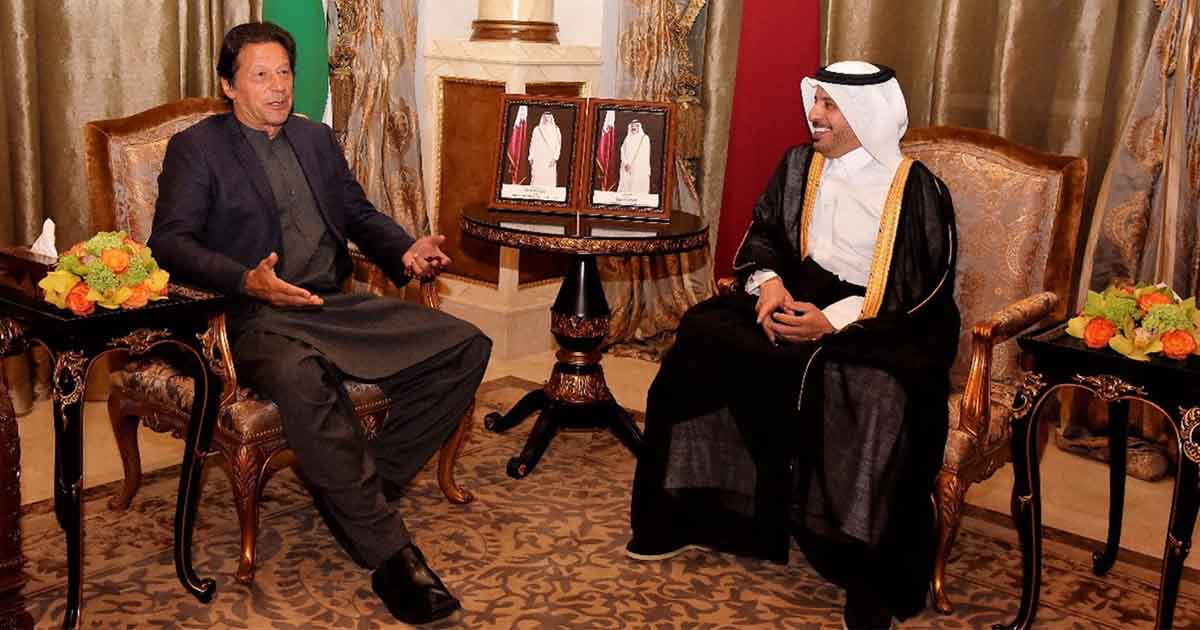 The state of Qatar has announced an investment worth $22 billion in different sectors of Pakistan during the upcoming visit of the Qatari Emir Sheikh Tamim bin Hamad Al-Thani according to reports. It is also reported that the Qatari Emir will be visiting Pakistan on June 23, 2019, however, the duration of his stay has not yet been confirmed.

The news about the Emir’s visit, was first reported by GVS (Global Village Space), in the second week of June, it was also confirmed by Pakistan’s Railway Minister, Sheikh Rasheed Ahmed. Talking to reporters, Sheikh Rasheed stated that during Qatari Emir’s visit, both countries will sign multi-faceted agreements worth $22 billion.

Pakistan has been a consistent ally of all the key Gulf States in the past and hence despite the Gulf crisis in 2017, it decided to remain an impartial ally to all Gulf States.

However, the Qatari investment in Pakistan increases country’s continuing challenge of balancing its relations with important Gulf countries. Pakistan has historically tried maintaining neutrality between its Arab allies (lead by Saudi Arabia) and its immediate neighbor Iran.

However Pakistan’s balancing act has now been compounded by the growing fault lines inside the Gulf Cooperation Council countries (GCC) where Saudi Arabia, UAE, Bahrain and Egypt have imposed a blockade against the tiny Qatar since June 2017. Qatar is itself a founding member of the GCC since 1981 – when GCC lead by Saudi Arabia came into existence.

Qatar at present continues to be under this economic blockade and political boycott imposed by the Emirati-Saudi led bloc over alleged support to terrorism. Qatar has definitely angered Saudi Arabia and UAE by maintaining a robust and increasingly independent foreign policy towards Iran and Palestinian groups like Hammas and Hezbollah.

Doha had also been more tolerant of Muslim Brotherhood. But accusations of “supporting terrorism” is something which Doha strongly denies and no one in the world takes this Saudi charge seriously. Western countries and media have mostly been sympathetic to Qatar as they see a tiny state being harassed by its bigger and powerful neighbors.

Qatar maintains a robust foreign policy centered on the principle of “hedging”. It maintains United States largest air and military bases in the region, interacts diplomatically with Israel but supports Palestinian groups and has good working relations with Iran with which it shares the Pars Gas fields. (North/South Pars fields)

Japan, Russia and China are important trading partners of Doha which has become the largest gas exporter in the world. Since the blockade, Qatar has further strengthened its independent foreign and economic policy that aims to go beyond the premises of the gulf. FIFA world cup is being held in Doha in December 2022 and Qatar recently beat off the Saudi attempts to broaden the ambit of FIFA matches beyond Doha when FIFA board declined to increase the foot ball matches from 32 to 48.

How is Pakistan maintaining a balanced position in the Gulf amid crisis?

The announcement of the visit has come at a time when the gulf allies are embroiled in a struggle for power and dominance whereas, Pakistan, a key Arab-Gulf ally, struggles with a neutral foreign policy due to its domestic vulnerabilities.

Pakistan presently faces serious economic challenges, such as deteriorating foreign exchange reserves, depleting exports, a fast-growing current account deficit coupled with an alarming fiscal deficit. On top of it, Pakistan also faces a serious debt crisis due to its dependency on borrowing in the past and at present; a temporary fix to its longstanding economic woes. Subsequently, Pakistan’s GDP rate has hit a nine-year low with an increased 9.11 percent inflation rate.

Talking to reporters, Sheikh Rasheed stated that during Qatari Emir’s visit, both countries will sign multi-faceted agreements worth $22 billion.

Hence, it is crucial for Pakistan to maintain an impartial foreign policy in order to help develop its economy. Pakistan has been a consistent ally of all the key Gulf States in the past and hence despite the Gulf crisis in 2017, it decided to remain an impartial ally to all Gulf States.

Read more: The Qatar Charity: Qatar’s Humanitarian Efforts for the Orphans of Pakistan

In October last year, Pakistan’s premier visited Saudi Arabia in the pursuit of bringing foreign investment to the country. During his visit, Imran Khan was successful in negotiating a $6 billion bailout package. In addition to Saudi’s bailout package, the UAE in December last year also announced a cash deposit of $3 billion in the State Bank of Pakistan in order to improve the balance of payments of the country.

Both this financial assistance came at a crucial time when Pakistan’s rupee had devalued to a significantly low level and trade deficit had reached historic lows. However, the last payment worth $1 billion was withheld by the UAE. While reasons are not clear but this coincided somehow with PM Khan’s visit to Qatar in January this year.

Pakistan has been a consistent ally of all the key Gulf States in the past and hence despite the Gulf crisis in 2017, it decided to remain an impartial ally to all Gulf States.

Now that Pakistan has also negotiated a bailout package from the International Monetary Fund (IMF), it is under the obligation to reschedule the short-term loans from China, UAE and Saudi Arabia, that Pakistan had negotiated before the IMF bailout package. Therefore, Pakistan’s efforts to obtain the $2 billion monetary benefit from the UAE might be compromised as a result of Qatari Emir’s visit to Pakistan.

Minister for Planning and Development, Makhdoom Khusro Bakhtyar, on Saturday during a press brief stated that Pakistan’s relations with Qatar are independent of its alliances with the other Gulf States and hence there is no question about Pakistan’s impartial foreign policy position. “Pakistan’s relations with Qatar are independent of its ties with other countries,” he said while talking to reporters on Saturday in Islamabad. While discarding rumors about UAE’s apprehensions with Pak-Qatar alliance he stated, “There is no pressure from the UAE on Pakistan about its relations with other countries and our foreign policy is independent,”

Pakistan remains to adopt a neutral foreign policy in the Gulf

The administration under PM Imran Khan has maintained that it would pursue an independent foreign policy in the Gulf. Hence, it is expected that the Emir’s visit to Pakistan will lead to bilateral agreements between the two countries based on energy, agriculture, livestock and on Pakistan’s economy. It is also expected that the 10 year LNG deal will also be finalized during Qatari Emir’s visit.

US-Iran conflict intensifies: who is to blame?