“The challenge is for the two sides on how to move forward. In Islamabad, we do have a strong desire to move forward. We have the patience to wait. If they don’t break the ice in Amritsar perhaps we will find another opportunity somewhere later.” Abdul Basit, Pakistan’s High Commissioner to India said that in an interview on Dec. 2, with Indian channel Aaj Tak.

On the importance of dialogues he stated that, “Talking to each other is inevitable. Whether it happens one year down the road or three years down the road.”

Pakistan’s high commissioner appears to be launching this peace offensive against Modi government.  When Sartaj Aziz is due to attend the Heart of Asia conference being held in Amritsar on Dec. 3-4. Pakistanis are trying to send the message to the Indian public and to the world at large that it is not Pakistan but Modi government that is retching up tensions in South Asia. Sartaj Aziz will be accompanied by Pakistan’s ambassador to Afghanistan Sayed Abrar Hussein and senior Ministry of Foreign Affairs (MoFA) official Mansoor Khan who handles Afghanistan. Sartaj Aziz stated that “It’s a good opportunity to defuse the tension.” Sushma Swaraj paid visit to Pakistan in a similar situation on Dec. 8, 2015 for Heart of Asia Conference held in Islamabad. India and Pakistan were having frosty relations immediately after Modi Government took power in India. It was then that the border tensions erupted between Pakistan and India at the time when two historically hostile countries were about to make a trade deal which could eventually bring long desired peace to the region. The Commerce Ministers of Pakistan and India, Khurram Dastgir Khan and Anand Sharma respectively, had almost arrived at a land mark trade agreement. But all efforts went in vein with the Narendra Modi taking oath in New Delhi.

Prime ministers of Pakistan and India met in Ufa, Russia in August 2015, in an attempt to break the ice. But apparently under Indian pressure, Kashmir issue was not included in Ufa statement which exposed Nawaz Sharif to severe criticism within Pakistan. Communications again remained suspended after that. Then the two Prime Ministers had a brief handshake on Nov. 30 in Paris during the climate summit. Indian and Pakistani National Security Advisers (NSAs) led delegations for talks in Bangkok after meeting of two Prime Ministers in Paris. It was then that Indian foreign minister, Sushma Swaraj – who earlier was not scheduled  to attend -suddenly visited Islamabad leading the Indian delegation to the ‘Heart of Asia’ donor conference on Afghanistan, Pakistan had formally invited her to come to Islamabad in the third week of November 2015. An impression was thus created that NSA’s meeting – between Gen. Nasir Janjua and Ajit Doval – in Bangkok had set the stage for Sushma’s participation. But the hard fact remains that Indian foreign minister’s presence in Heart of Asia Conference at Islamabad was in India’s own strategic interest as India would have never wanted to boycott such an important platform.

Now in Dec, 2016, situation has been reversed; it was of utmost importance for Pakistan to represent in Heart of Asia Conference.  Pakistan could not afford to detach itself from Istanbul process which was initiated by Turkey, in 2011, with the help of Pakistan for Afghanistan. This is what Abdul Basit hinted when he said that, “Whether or not there are bilateral talks, our adviser (Sartaj Aziz) is coming because Afghanistan is important for us, its stability and economy is important for us, so we will participate constructively.”  He further added that during the conference, attention must remain on Afghanistan. He responded on a question asked to him whether he was worried for being cornered by India and Afghanistan in conference as both countries hold Pakistan responsible for cross border terrorism they face by saying, “Why should we worry because terrorism is also an important issue for us.”  Later he said that terrorism is a common challenge and it is only through a cooperative approach and progress cannot be made by targeting one country.

He said that Pakistan has zero tolerance for terrorism and it has taken actions against Lashkre-e-Taiba and Jaish-e-Mohammad. He further stated that, “but all terrorism is a big issue for us. We want to discuss what is happening in Balochistan, FATA, Karachi. We would like to move in a more reasonable manner.”

In another interesting twist, Gurpatwant Singh pannun, Legal Advisor Sikhs For Justice, has written an open letter to Sartaj Aziz and has requested him to bring their movement of Independence Referendum in notice in Heart of Asia Conference. Apparently the venue of Heart of Asia in Sikh holy city of Amritsar has prompted this thinking. Indian Prime Minister Narendra Modi has consistently talked about Baluchistan, and rights of Baluch insurgents, on every international forum. Baluch insurgent leader, Brahmadagh Bugti has also recently moved to India after refusal of political asylum in Geneva. Whether Pakistan now talks about the rights of Sikhs and draws attention to their movement in conference, being held in Amritsar, or not is yet to be seen. 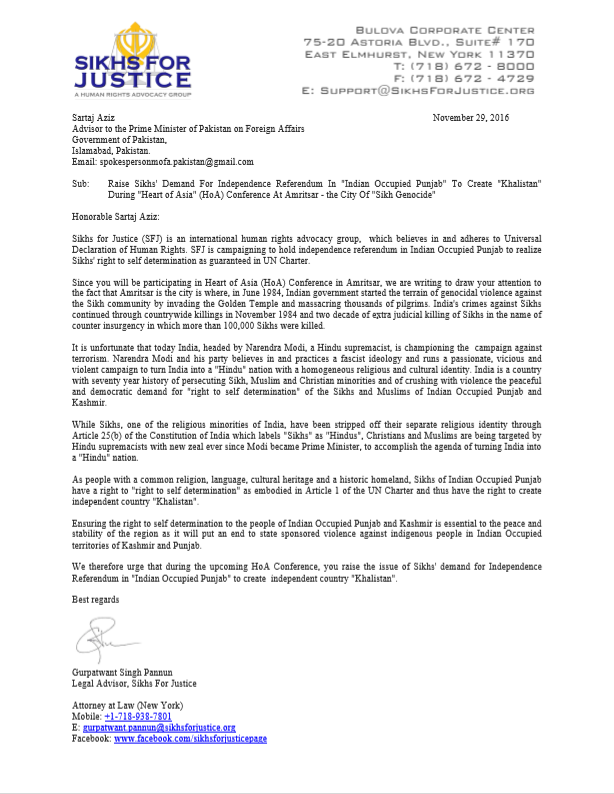 About the issue of Line of Control Abdul Basit said that, “2003 ceasefire was an important Confidence Building Measure (CBM). We would not like to see it destroyed.” He said that firing along LoC must be stopped.

About the Indus war treaty he said that it is a permanent treaty which can neither be changed nor abandoned unilaterally and India should discuss their problems through dispute settlement mechanisms. He was responding to Modi’s recent statement. Modi had said that, “The Indus water, India has right to those waters… it flows into Pakistan, the water goes into the sea. The water belongs to Indian farmers. We will do whatever we can to give enough water to our farmers.”

Pakistan’s High Commissioner, Abdul Basit described that the killing of Burhan Wani has brought India and Pakistan back to “square one”.

He expressed Pakistan’s desire for negotiations but was not sure if India is willing and that Pakistan would like the ice to break but it would not like to take any step that will not be reciprocated. Pakistan has clearly taken a diplomatic offensive to reach out to Indian public and world at large. It remains to be seen how Modi government responds to it.

Part two of Imran Khan’s audio on US cipher leaked

The assertions of a regime transition are false, according to Donald Bloom, the US ambassador to Pakistan, who called PTI's claims "unfortunate".
Top News

A Friday explosion in Kohlu district's main market in Balochistan left at least one person dead and 20 others injured.
Top News