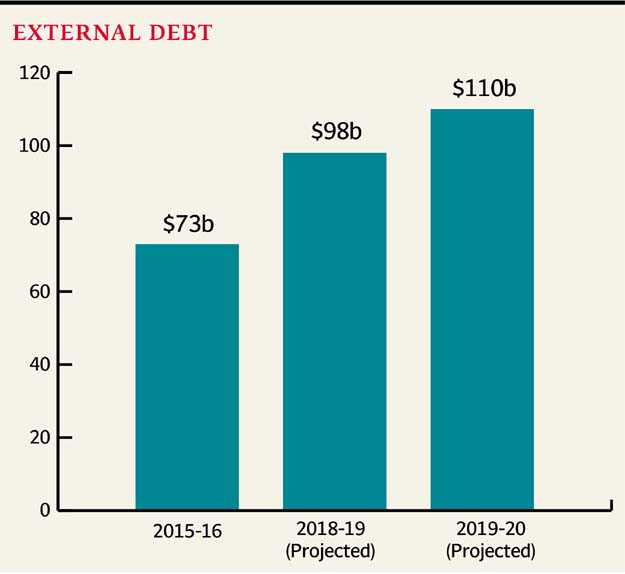 There is increasing concern in Pakistan over the foreign loans situation and the direction this is taking the country.

To offset the declining foreign currency reserves of Pakistan and to pay back foreign debt obligations has meant the country has taken out more loans to pay off existing ones. The past 7 months has seen Pakistan take out new loans worth over $4.6 billion, this includes the $1.9 billion obtained from China.

read more: Bloomberg thinks Pakistan will be an over-performer next year

Overall in the last 3 years the government has taken out over $25 billion in fresh foreign loans, this is a net addition $14bn of loans.

The country’s debt to GDP is close to 70 percent. In June 2016, the finance ministry amended the law that had a statutory limit of restricting the public debt at 60 percent of GDP.

Majority of Pakistan foreign borrowing is going on budgetary support

Numbers at the ministry of finance and economic affairs have shown that Pakistan has received $4.6 billion foreign economic assistance between July 2016 to January 2017. Out of this $2.3bn  has been borrowed for bolstering budgetary and balance of payments. This is money that will make no return and has to be paid off ultimately using further loans.

A balance of payments deficit is considered as a bad omen for a country as the ability to pay back the liabilities starts to diminish.

These borrowings were from the $1 billion Sukuk Bonds launched to by pledging the  M2 motorway (Lahore-Islamabad) as collateral. Further, $1.2 billion have been taken from foreign banks.

These $4.6 billion of the foreign loans make up 57 percent of the annual economic assistance to Pakistan which earlier government predicted at $8 billion.

Loans from China to pay our current bills

Pakistan has been taking loans from Chinese banks under the name of CPEC but these loans are being used for budgetary support and current payments.

Moreover, the majority of these loans, $1 billion, are being taken at commercial rates and the other $900m for project financing. Loans taken for the latter purpose – are used for investment – are loans worth taking out which as long as the rate of return we make on them is greater even by a small amount – we can repay and they benefit the country.

Over the past three years, the government is facing political and domestic issues and the solution to the problem has been found by spending money through borrowing. The country is facing a further reduction in the financial reserves because as of now, the government is under a debt of $6.5 billion, which is to be paid in the coming 15 months.

At the same time the economy in the past 3 years has seen falling remittances, as workers in the middle east lose their jobs, the relatively strong Rupee has hit exports and now the foreign debt repayments will hit the economy.

State Bank Pakistan reserves now stand at $17 billion down from their high point at $19 billion. Coalition support funds have dried up. The country has been lucky that during these three years oil prices have been around 50 percent of the prices under the PPP government.

“Pakistan will need to go to the IMF for another bailout around election time – either right before it or right after it,” Dr Ashfaque Hasan Khan, Dean of School of Social Sciences and Humanities at NUST

The finance minister protests at what independent Economists are saying, however, Dr Hafiz Pasha and former director-general debt Dr Ashfaque Hasan Khan have projected that the debt count will be $110 billion by 2019-20.

A report by the IMF a couple of months ago criticised the government external debt that was primarily increasing because of the government’s failure to enhance exports and attract foreign direct investment.