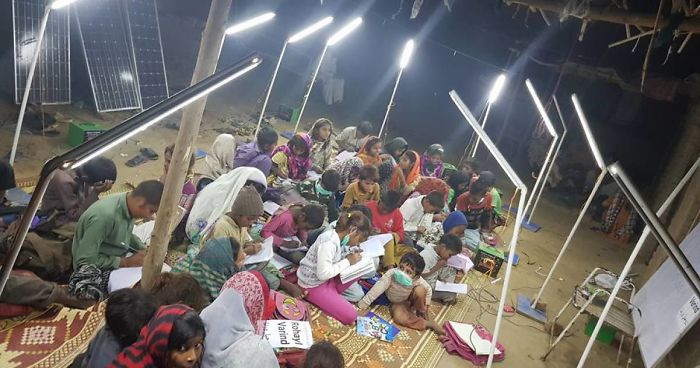 I believe the mind once enlightened cannot again become dark.

A free school for underprivileged children living in slums of Pakistan. The main reason to initiate the night school was to teach child labor who works the whole day and gets free at night.

Teaching more than 65 students every day is an attempt to educate Pakistan. Apart from this, we are fighting a war against poverty & terrorism through it. Students are provided free books, stationery, food, clothes, ration etc.

There is no denying that there is evil in this world but the light will always conquer the darkness.

The school not only teaches the basics to children from underprivileged backgrounds but also teaches them basic ethics and etiquette. There are also some other engaging activities like family days, sports days, ice cream days, mango parties, Eid milan parties, art classes etc. The school has tried to keep the students interested. There are also distribution ceremonies where students are given chocolates, biscuits, clothes, food and other gifts.

The classes take place outdoors with just a whiteboard for the teacher to write on and a piece of cloth for the students to sit and learn. Rohayl has taken it upon himself to go to the school for at least two hours on a daily basis.

The quality of education at the Slum School is in no way enough to negate the need for a formal education, but the effort alone is commendable. Rohayl Varind also argues that “the main motive is to bring knowledge and basic level education to otherwise deprived children and adults, who would not be having even an inkling of or just meager knowledge or education otherwise”.

Rohayl Varind teaches in his Slum School at night as well by using solar fans & solar lights. These special classes are conducted for students who are involved in child labour who returns home after sunset. Moreover, parents of our students also attend these night classes.

Slum School has also been featured on numerous Pakistani news channels & news papers including ARY News, 7 News, City 41, Abb Takk News, Express News, 24 News, BOL News, ARY News Blogs, Daily Pakistan, FM 103, FM 94, Metro One News, Jang Newspaper, etc. Now, Rohayl Varind hopes to spread this concept further around the country and encourage other people to take part as well. When asked about how he supports his venture and how people should contact him if they want to contribute, he said that there are no permanent donors.

Moreover, he doesn’t take cash donations from anyone and would prefer if people buy a board and start teaching unprivileged kids around them, like their maids, the security guards, their children, and so on.

Slum School is located in Faisalabad

According to statistics, Pakistan is amongst top 5 countries most affected by Terrorism. I, Rohayl Varind started working for Pakistan’s peace and a fight against terrorism since my teenage years through several projects. I believe education is a vaccine for poverty so, in 2016, I started a Slum School. A system of education designed for the deserving yet underprivileged students. I have personally seen that violent students are becoming calm day by day as education eliminates triggers of violence and it promotes self-discipline. Education helps children become disciplined and trained in peaceful coexistence with others in society. It also promotes self-regulation and helps to keep violent impulses in check. I have been following terrorist attacks in Pakistan and have been researching them since several years and I discovered that terrorist groups recruit from largely poor and uneducated sections of society, who have no access to employment or money. Education eliminates poverty and unemployment that are often the motivating factors for terrorism. So I believe killing leaders of terror groups do not stop militant organizations, education does. Several cases abound whereby prominent leaders of terror groups have been killed, but militancy has not ended. Someone else simply takes over in the chain of command. To end terrorism, lasting social change through education is vital. People can be killed, ideologies cannot: While a person can be killed, an ideology can only be combated through education.

Pakistan is a country plagued by issues like poverty, corruption, and, the biggest of all, illiteracy. With an overall literacy rate of 56.6% (according to data available from UNESCO in 2015), Pakistan ranks very low amongst other countries based on literacy rate.
There are a number of factors that contribute to the literacy rate in Pakistan and will continue to do so for quite some time— one of the biggest being the 24 million or so children that have never been to school.

“There are unfortunately an estimated 250 million children in Asia alone who are either deprived of school or are drop outs,” says Rohayl Varind. “As an educationalist, my conscience would not be at peace unless I made a difference in these statistics and thereby the condition of the world brought on by it.”

Rohayl Varind is an International Award Winning Entrepreneur, Innovator, Social Activist & Educationist. Winner of World Summit Youth Award 2014-2015 in Sao Paulo, Brazil from 1898 submissions, spanning 138 countries, impressing a panel of 40 jurors from all corners of the globe. He is the founder of several welfare projects as well as entrepreneurial projects such as Wall of Humanity, Voice of Youths, Voice of R, Times of Youth, War Against Poverty etc.

How to Make Your Business Vehicles Last as Long as Possible

Millions of dollars were laundered by the Pakistani group – US Report