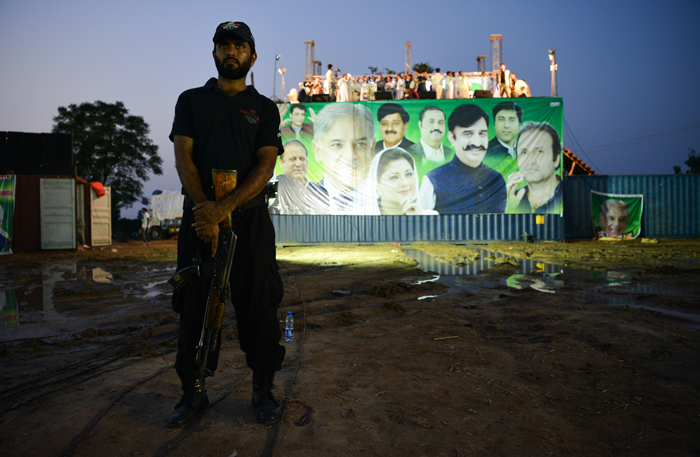 The next government in Pakistan will face myriad challenges from unsustainable population growth to simmering extremism, all complicated by the decades-long tussle between civilian and military leadership.

No matter who is voted into office on July 25, the new rulers will have to make hard choices, and quickly. Here’s a rundown of the biggest hurdles Pakistan is facing.

Security has dramatically improved across Pakistan following a military crackdown in recent years. However, analysts have long warned that Pakistan is not getting to the root causes of extremism and that the militants can still carry out spectacular attacks — an ability they demonstrate periodically.

The next government will be tasked with meeting the country’s challenges without upsetting this delicate balance of power.

That includes during this campaign, with a string of bombings at political events killing 175 people, including the second deadliest militant attack in Pakistan’s history — an Islamic State-claimed blast in Balochistan on July 13 which killed 149 people. Analysts have warned that insurgents may be regrouping and seeking to reassert themselves after years of setbacks.

Pakistan’s next government faces growing fears of a balance of payments crisis, with speculation mounting it will have to seek its second IMF bailout in five years.

The central bank is burning through foreign reserves and devaluing the rupee, including another five-percent dive this week, in a bid to bridge a widening trade deficit.

Pakistan, which has long relied heavily on imports, increased its procurement of materials to help build a string of Chinese-backed infrastructure projects after inking a multi-billion dollar investment package with Beijing — the terms of which are opaque, leading to fears over how Islamabad will pay for it.

The economy has also been stung by higher oil prices. Meanwhile, meagre exports such as textiles have taken a hit from cheaper Chinese-produced goods, while foreign remittances have also slowed. The winners of the election will have “limited time” to act, Fitch ratings agency warned earlier this month.

Conservative Pakistan, with its limited family planning, has one of the highest birth rates in Asia at around three children per woman, according to the World Bank and government figures. That has led to a fivefold increase of the population since 1960, now touching 207 million, draft results from last year’s census show.

The next government in Pakistan will face myriad challenges from unsustainable population growth to simmering extremism, all complicated by the decades-long tussle between civilian and military leadership.

The boom is negating hard-won economic and social progress in the developing country, experts have warned. To add to the problem, discussing contraception in public is taboo in Pakistan.

Analysts say unless more is done to slow growth, the country’s natural resources — particularly drinking water — will not be enough to support the population.

Pakistan is on the verge of an ecological disaster if authorities do not urgently address looming water shortages, experts say. Official estimates show that by 2025 the country will be facing an “absolute scarcity” of water, with less than 500 cubic metres available per person — just one third of the water available in parched Somalia, according to the UN.

Pakistan has massive Himalayan glaciers, rivers, monsoon rains and floods — but just three major water storage basins, compared with more than a thousand in South Africa or Canada. As such, surplus water is quickly lost.

Political initiative will be essential to building infrastructure to reverse the course of the impending crisis. There is also little in the way of education on water conservation.

Pakistan has spent roughly half its nearly 71-year history under military rule, and the imbalance of power in civil-military relations has long been seen as an impediment to democracy and progress. Hope surged in 2013 as the country moved through its first ever democratic transition of power.

According to the World Bank and government figures. That has led to a fivefold increase of the population since 1960, now touching 207 million, draft results from last year’s census show.

But since then experts have warned of a “creeping coup” fuelled by tensions between the generals and the government of three-time premier Nawaz Sharif, largely attributed to his desire to assert civilian supremacy and seek warmer relations with arch-rival India.

Sharif, ousted in 2017 and arrested for corruption earlier this month, says he and his party are being targeted by the military. Media, analysts, and other politicians have also widely decried what one think tank described as a “silent coup” against Sharif, with cricketer-turned-politician Imran Khan and his Pakistan Tehreek-e-Insaf party the obvious beneficiaries.

This week, Pakistan’s Human Rights Commission warned of “blatant, aggressive and unabashed attempts to manipulate the outcome of the upcoming elections”, with “alarming implications for Pakistan’s transition to an effective democracy”. The next government will be tasked with meeting the country’s challenges without upsetting this delicate balance of power.

Conservatives vs Democrats: War of the same – Jacob G. Hornberger