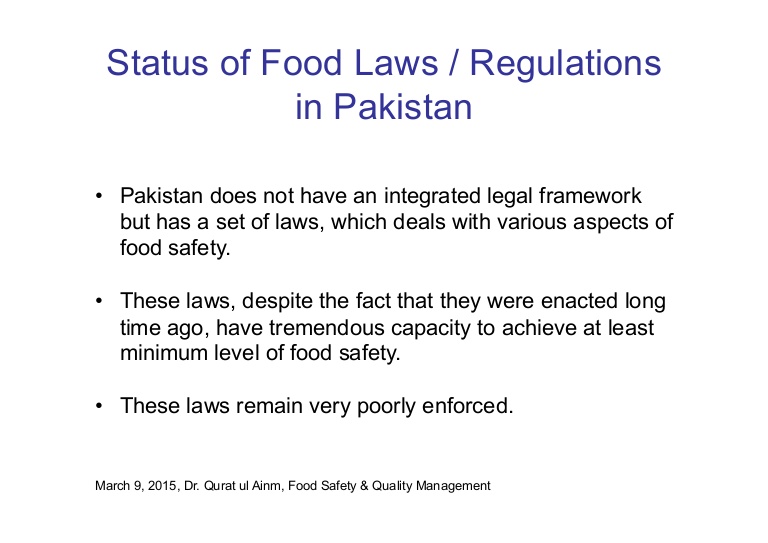 Nestlé Pakistan in collaboration with Pakistan Council of Scientific & Industrial Research under Ministry of Science and Technology is organizing a National Conference on Food Safety and Harmonization: shaping a Healthier Nation on Wednesday, the 22nd November 2017 in Serena Hotel Islamabad.

This conference, though sounds purely academic, has assumed great policy significance for Pakistan’s food and beverage industry – for reasons not generally understood by media, politicians and public. It is to do with the timing of this conference; it is coming at a time when Pakistan’s food industry, reeling from the effects of 18th Amendment, is demanding harmonized national standards and quality controls.

The keynote address will be delivered by the outgoing chairperson of the Codex Alimentarius, Ms. Awilo Ochieng. Mrs. Ochieng has been associated with the global food watch since 1999, having led various commissions within the organization. She is considered as the single person force behind the concept of World Food Safety Day (WFSD) – which will be her lasting legacy to food standards, worldwide. Her proposal first made in 2015, finally turned into a reality, in 2017, when UN General Assembly legislated 7th June as “Annual World Food Safety Day”

Secretary Industries, Maroof Afzal and Secretary Board of Investments, Azhar Ali will attend among scores of industry executives traveling from Lahore and Karachi to join in the conference.

What is Codex Alimentarius?

The Codex Alimentarius Commission (CAC) is a joint intergovernmental body of the World Health Organization (WHO) and Food and Agriculture Organization (FAO) of the United Nations. It has been working since 1963 to develop international food standards based on scientific advice to protect consumers and ensure fair trade practices.

The conference is taking place at a time when the food industry in Pakistan is already demanding harmonized standards. Industry insiders argue that before the 18th amendment, Pakistan Standards Quality Control Authority (PSQCA) was the standard making body which followed international food standards and maintained a liaison with Codex Alimentarius; however, since the 18th Amendment, provinces have started developing their own food authorities.

Punjab Food Authority (PFA) is a case in point, which is not only implementing food standards but is also setting them and these are not always in sync with the standards set by the federal authorities. KP and Sindh have also legislated their own respective food authorities, while they have not started functioning but food industry in Pakistan is worried on growing divergence between food standards across the country – and the local politics that accompanies these provincial authorities. Industry sources believe that crisis is now so huge that either the Council of Common Interests (CCI) intervene to set national standards or Pakistan, as a whole, follows Codex Alimentarius standards.

Pakistan’s nascent dairy industry is hard hit by these confusions. Currently, there is no minimum pasteurization law. Most milk being consumed by the population, almost 90-95%, is raw milk – being provided by different non-standardized vendors or farming communities. Most of this milk passing through the system is not regulated. Some common standard of regulation is needed if the dairy industry has to develop its supplies across the four provinces and dependent territories.

Without the development of standards, industry investments will not take place. Currently, Pakistani livestock yield is amongst the lowest in the world – around 3-4 litres/day per buffalo. This is a small amount of what is produced from livestock animals in countries the where industry is scientifically organized.

As executives of the food and beverage industry, international experts, federal government agencies and national media assemble together in Islamabad’s beautiful Serena Hotel, a heated debate is expected around some of these issues.